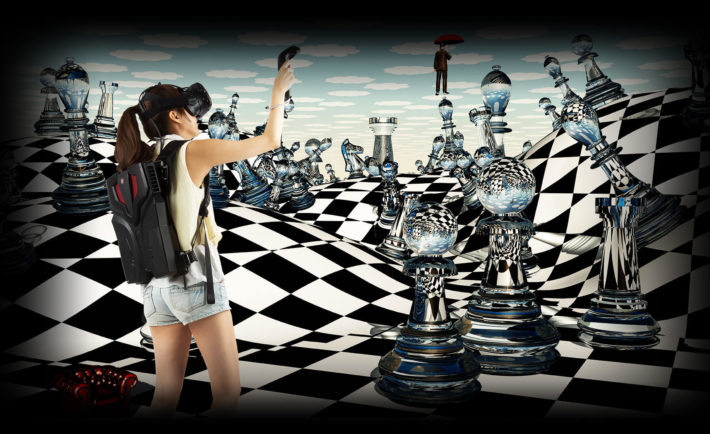 Several weeks ago, MSI announced the MSI VR One backpack at the Tokyo Game Show. Unlike the competition, MSI also made an announcement about the future sales as well, launching into production during October. Originally intended for launch on October 30th, it took until middle of November to bring the availability of VR One into both North America and Europe.

Truth to be told, the concept of a portable VR backpack is getting challenged by innovations such as the HTC/TPCast Wireless Gig (60GHz) concept product. The extent and efficiency of wireless data transfer between headset and PC’s has not yet been confirmed in practice. Nor how it is technically done. Thus, even though a lot has evolved in VR technology, the need for a portable, movable high-performance VR system remains.

The Lighthouse concept paired with the future wireless VIVE headset act together in a large area… but the real range is unknown at this time. Getting the Power of a gaming PC on the back is the most optimal option for popularizing VR / AR technology through various public presentations, the arenas and arcade settings. Survival Horror and Escape House experiences started to gain in popularity over the past couple of years, and putting such a experience into the VR is guaranteed to make your spider-sense tingling.

For now, and for this purpose, solutions such as the MSI VR One backpack have a future and advantage over the conventional systems. VR One is now available in two versions and shipping to all the available markets, from the U.S. to Europe and Asia. Price for the weaker model is $2,000 and comes with Windows 10 Pro and two years warranty. The models feature either a PCIe SSD Gen3 x4 of either 256 or 512 GB and GeForce GTX 1060 or a 1070 graphics card. The processor is an Intel Core i7 6820HK with 16GB of RAM on the HM170 chipset. The system weighs 7.90 lbs, i.e. 3.6 kilograms. and dimensions are 15.90″ x 11.50″ x 2.40″ (W x D x H). As far the connectivity ports go, VR One comes with Thunderbolt 3, Mini DisplayPort, HDMI 2.0 and no less than four USB 3.0 and Microphone and Headphone jacks for audio. In addition to MSI, we’ve seen designs from Alienware, HP, Schenker, Zotac and Colorful. Perhaps the arrival of wireless headset force them to pull out a new trump card in the hole.