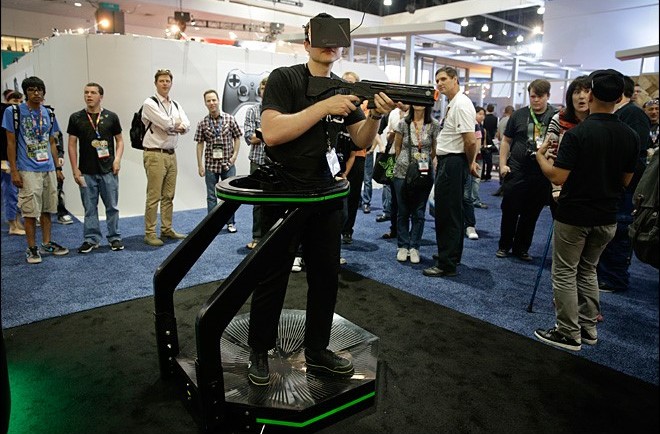 Current situation with clumsy VR hardware and quite unpolished VR content is somewhat improving. Big money is being thrown on the table and the whole movement is being propelled forward. However, the goal of seamless experience is far away and only the strongest will endure until the finishing line. Virtuix is a relatively small company that came into the limelight several years ago, raising over a million dollars on Kickstarter.

Virtuix is addressing one of the key obstacles for the immersion into the VR: Freedom of movement inside virtual presence. Motion sickness, room-scale space constraints and unnatural navigation schemes like teleportation that inherently break immersion and spoil the gameplay. Virtuix Omni is the first solution that works the best with virtual reality first-person perspective applications where users walk or run around and enjoy the environment. Omni is a physical reverse-shape spherical platform which allows that actual physical movement – walking, running, controls and reflects such movement in VR applications. It is designed with 360 degree freedom of movement and you can move and look in different locations simultaneously.

The user is positioned within the support ring with an attached harness, walking on a concave platform. Omni requires special “Omni” shoes that have tracking pods and low-friction sole compatible with texture of concave platform. Such a system certainly requires some adjustments and awareness, and probably not for the enthralled and physically clumsy. The noise level of the system is comparable to that of a regular treadmill (70-75 decibels). Platform is 55″ / 140cm wide, 55″ / 139cm long, and 35″ / 89cm tall with the ring located in its lowest position.

Officially, Virtuix comes Unity and Unreal Engine 4 SDK, speeding the integration in the game or some other VR application. We’ve seen Omni functioning with other engines as well, such as Left 4 Dead 2, Counter-Strike: Global Offensive, Far Cry 4 and others. The Omni platform translates movements to keystrokes, analog gamepad input, or a direct input into the game. Walk, run, jump, strafe, or even sit – movements are mapped from a natural motion into the keyboard / gamepad. At current state of VR, for situations like driving a car, crouching, going prone or similar in game actions, a handheld gamepad or gun controller with the required buttons must be used. Omni requires virtual reality headset, a wireless controller (such as a Vive or an Xbox controller) and a PC or a Mobile VR device. Although the biggest promotion for Omni was now directed toward the game audience it is certain that non-gaming applications such as virtual fitness and exercise, tourism, jobs, and more people gathering adventures can benefit from this solution.

To date, Virtuix raised about $16 million in funding. After four years of work, Kickstarter backers can receive their devices only if you live in the good old USA. During development Virtuix received more than 3,000 backers through the standard crowdfunding pre-order system. During the development Omni grew in quality, size and weight. It stopped being a simple, “Made in Shenzhen” plastic platform that would probably crack within the first couple of days of use, evolving into a higher quality product. Sadly, that meant it become too heavy and expensive for shipping globally – at least that’s the excuse to the people who have pre-ordered it. Virtuix is working to develop a model in which it could be sent all over the world – for now, the focus is on quality:

“Quality remains our primary focus. All units are tested at the end of our assembly line in China, and our team fully inspects each Omni again upon arrival in Austin before we deliver the units to our customers. See a few pictures below of the arrival of our first container and our Austin headquarters transformed to handle this flow of products.”

If you want the Virtuix Omni in its present form, the shipping cost to Europe would be approximately $600-900 i.e. more than the cost of an actual Omni platform.

For the international customers, Virtuix offers a full refund on pre-orders, plus the amount of interest of 3% per annum, compounded monthly. Omni has its own forum, and the atmosphere inside the Omni community is obviously negative. Still, receiving returned funding with interest is not something we could say for numerous crowdfunded projects which took the money without ever thinking of returning it.