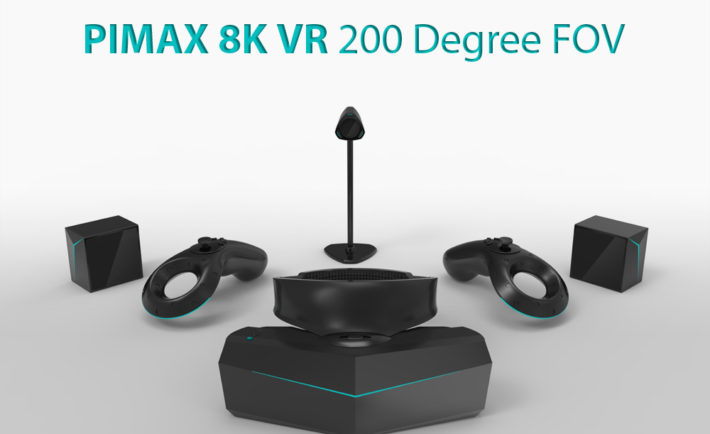 If there’s one thing certain about VR, that is the pace of development. With the original headsets offering a low resolution of 1K per eye, we’re starting to see new products coming to the market offering higher fidelity. Back in August 2016, PIMAX came out and announced world’s first 4K (2k per eye) VR headset. Few weeks later, we managed to get the product in our labs and post a review of Pimax 4k VR headset. We had some things that bothered us about this VR headset, and now, few months’ later guys from Pimax decided to step it up a notch. In this article, we will take a first look into new and improved VR headset from the Chinese enthusiasts, the Pimax 8K.

This Chinese VR headset was shown at this year’s CES, and it just blew me away. The new Pimax 8K is essentially two 4K in one – two 3840 x 2160 displays bring unbeatable resolution of 8.2 million pixels per eye. The exterior of Pimax’s new prototype bears some resemblance to Starbreeze’s upcoming 210 degree StarVR headset, and it uses a PlayStation VR style mounting mechanism. Each of the headset’s displays are placed at a canted angle, just like StarVR’s.

This new version of Pimax will also get a stand, two position devices and two gaming controllers. This looks as a big improvement too, since the last Pimax headset was relying only on built in sensors. In addition, this new headset still has a built in gyroscope, distance sensor, motion sensor, light sensor and magnetometer. This should overall improve head tracking problems we had on Pimax 4K. It features 200 degree ultra wide angle and 53mm lenses. The last thing you need to know is that it costs $799, which is double the price of Pimax 4K. This is now a price competitor to HTC Vive, which sells at the same price (not in all markets).

Even though the price is the same, previous generation product simply did not had the software support which made Pimax 4K tedious to use. Furthermore, there’s still a question of what kind of PC system is needed to run this beast? We ran into trouble running the Pimax 4K with Intel Core i5 6600K and AMD Radeon R9 390X, and things only ran smooth on M6000 12GB – as 8GB on GTX 1080 sometimes proved inadequate.

The new Pimax 8K VR headset comes with a neat feature that should helps you run games and movies on an non-enthusiast class hardware. Just like Oculus, Pimax now has ‘Brain-warp’ technique. The concept is somewhat simple – drivers dictate the GPU to render frames in a sequence – first rendering should be a 4K picture for one eye, followed by a 4K picture for the other one. Given that the headset supports 90Hz (even 120Hz overdrive), rendering frames at 120, 160 or even 240 times in a single second… your brain should think that both eyes see the same image. That is neat trick, but at the end of the day you still need a PC that can run VR in 4K, so we strongly recommend a dual GPU configuration, not less than a GeForce GTX 1070 or single GTX 1080. We’ll see can HBM2 memory in the upcoming Vega-based Radeon cards do any difference.

We still do not know how well will this headset perform, and how well will they implement positional tracking and controllers with this headset. Only thing we know for sure that year after year, these headsets will evolve more and more, and at some point, we will have great headsets with no matching hardware to run it. If you want to see this headset for yourself, you can set up arrival notice here, and if you want to check out, and buy Pimax 4K you can do it here.