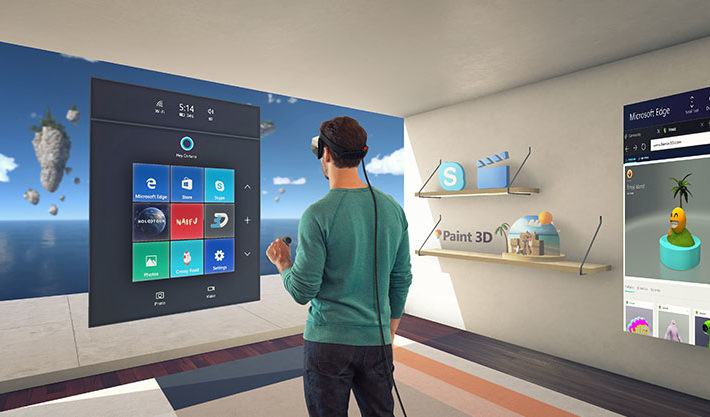 In a bid to cross the chasm between Augmented and Virtual Reality, Microsoft is starting to push the new buzzword: mixed reality. In the April 11th, 2017 update for Windows 10, called “Creators Update,” the company is bringing the mixed reality to the masses. While Hololens Development Edition was Microsoft’s first venture into augmented reality (AR) and Mixed Reality (MR or MxR), a number of other companies have joined Microsoft to put out their own virtual reality (VR) headsets, including the Oculus Rift or HTC Vive. On Tuesday, Microsoft is hitting back.

Microsoft Windows 10 Creators Update will have several new mixed reality features, enabling the users to experience Windows 10 apps, games, movies, TV, music in a completely new way. In a video below, Microsoft explains mixed reality in Windows 10 and the differences between AR and VR. This free update is available to all Windows 10 users that own compatible devices which are yet to hit the market.

During WinHEC conference in December 2016, Microsoft announced its partnerships with HP, Lenovo, Dell, Acer and ASUS to create more affordable VR headsets, priced at $299 and up. These affordable VR headsets may prove to be a better alternative to the more expensive Oculus Rift and the HTC Vive. Furthermore, the new generation of headsets are all priced significantly lower than the $3,000 required for Microsoft HoloLens Development Edition, yet HoloLens is the only headset that delivers a true mixed reality experience (according to Microsoft). We’d add a few more players to the mix, but those do not use Windows operating system. Osterhout Design Group or ODG is making big waves with its R-7 series of MR/AR glasses, including the heavy duty version.

The processing power required to run Windows 10 VR headsets is not as high as expected. For example, minimum technical specifications for the lower-priced Windows 10 headsets are significantly lower than the requirements for Oculus Rift or HTC VIVE;

We are getting closer to what Microsoft describes as the “first, fully self-contained holographic computer” offering a true mixed reality experience. You can pre-load Windows 10 Creators Update today, or wait for the official update being released, coming after the Surface Book convertibles (and similar partner products) receive their updates.