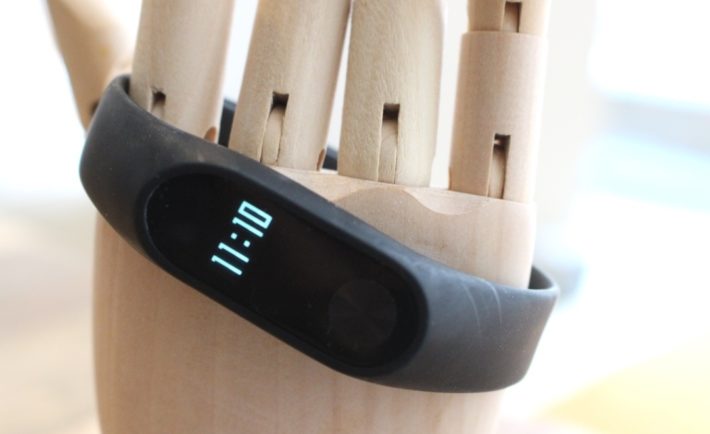 It has been a long overdue, the time has come to write an article on physical activity i.e. sports. Over the past couple of decades, we’re witnessing a big problem everywhere in a world – people just do not exercise and make dubious choices of removing the balanced diet. From Hawaii to the continental U.S., Germany or Croatia, Singapore or China – high percentage of people on this planet do not exercise at all (I know I don’t do it regularly). If you plan on challenging the status quo with your own body, we have a cool gadget named Xiaomi Mi Band 2.

The default black rubber-band model does not look especially pretty as the module is swallowed up by the cheap silicon (anti sweat?) band, with the ecosystem around the product already showing dozens of new designs, bringing multiple colors to the table. Regardless of what armband you use, the Mi Band 2 moves away from errors made by Samsung and others. Their wearable gadget is water resistant (IP67), in order to enalbe users to splash it with water or shower. As a matter of past history with ‘wearables,’ I admit that I took it off during my recent kayaking trip… just in case Mi Band 2 could end at the bottom of the Sea. The rubber band did not provide sufficient confidence. Luckily, the add-on industry already offers dozens, if not hundreds of different designs for the Mi Band 2.

Sadly, not all things are great as the 0.42-inch OLED display is ‘fuzzy’. Still, it does the job displaying the time, steps, calories burned and heart rate (no distance). It will come as no surprise that the “auto screen turn on” feature works only when it wants to. A nice little touch sensitive button that controls the display gives a good feeling, as the unit does not feature a touchscreen. Still, the whole device carriers a somewhat unnecessary anti-fingerprint coating. This is a quick, reliable way to interact with the Mi Band 2.

In terms of tracking, let us keep this simple and start with the positives. The Mi Band’s sleep tracking is good and accurate – the module automatically detects that you have gone to sleep, or woken up, and is a useful guide to how you are actually sleeping. (As for the deep sleep metrics, that is hard to tell if it’s accurate so we’ll leave that for a scientific test). Extras include the ability to set multiple alarms to vibrate to wake you up; a popular feature brought over from the first two Mi Bands.

As for the rest, Xiaomi says it has made both its step counting and heart rate tracking algorithms and tech more accurate. The activity tracking still is not quite up to scratch but, interestingly in different ways to previous Mi Bands.

The heart rate monitoring is a headline feature and has been improved but even when taking resting bpm, the readings do jump about within seconds. In addition, the data is presented in a useful way in Mi Fit application on your regular Android phone. One would not, and essentially cannot use this to stay in specific heart rate zones out on a run, as it is not continuous. On the plus side, it did take a reading every time I scrolled through to that option on the Band 2’s own display and it is much quicker than firing up the app with the Mi Band Pulse.

The other main feature, apart from tracking is receiving smartphone notifications. Sadly, this ends up being a hit and miss. While you can tweak the settings to get the Mi Band 2 buzzing when you have an incoming call or WhatsApp, WeChat, Skype or whatever you use for chatting… essentially neither function works how it should. This could be due to the Bluetooth connection being a bit patchy or it could be a bug that needs to be fixed. In any case, you need to look into Mi Band 2 as a standalone device, rather than a connected one.

One more thought on this… even though it is annoying not to hear notifications, the battery life could end up being much worse if this worked properly.

At the launch, Xiaomi made a new Mi Fit user interface but not a great deal has changed, at least so far. There is a dashboard showing the day’s activity, last night’s sleep, you are most recent heart rate reading and when your last streak (of hitting targets) was. You can also manually track your weight in the app.

From each of these you can access daily, weekly and monthly graphs, apart from heart rate which is still presented as a list of readings with little context. As stated before, the Mi Band 2 struggles to auto detect when you start running but the app is designed to break activities up into ‘walk’ or ‘activity’ in a timeline under the graphs. You can view the times, steps, minutes, distance and calories even though I could not find a way to edit or group these as you get on other apps.

Sharing stats within the app involved scanning the QR codes of your mates (unless you live in Asia, literally no-one is going to do this) but there are also options to share your progress via social media – Line, Twitter (which takes you to a message), Facebook etc.

Here, Xiaomi trumps Fitbit but not, I should say, rival budget wearables. After non-stop, day by day use of the Mi Band 2 for the past week and a half, the remaining battery – according to the Mi Fit app, is down to 24%. That alone suggests it would not get to the claimed 20 days (more like 12 – 14) the way I have been using it but this will differ from person to person.

Still, for a device with a display that is impressive. Essentially, if you charge it once every week, you should never run out of juice. You can get this cool gadget for $23 in the link provided here. You can also look for other Xiaomi brand deals here.