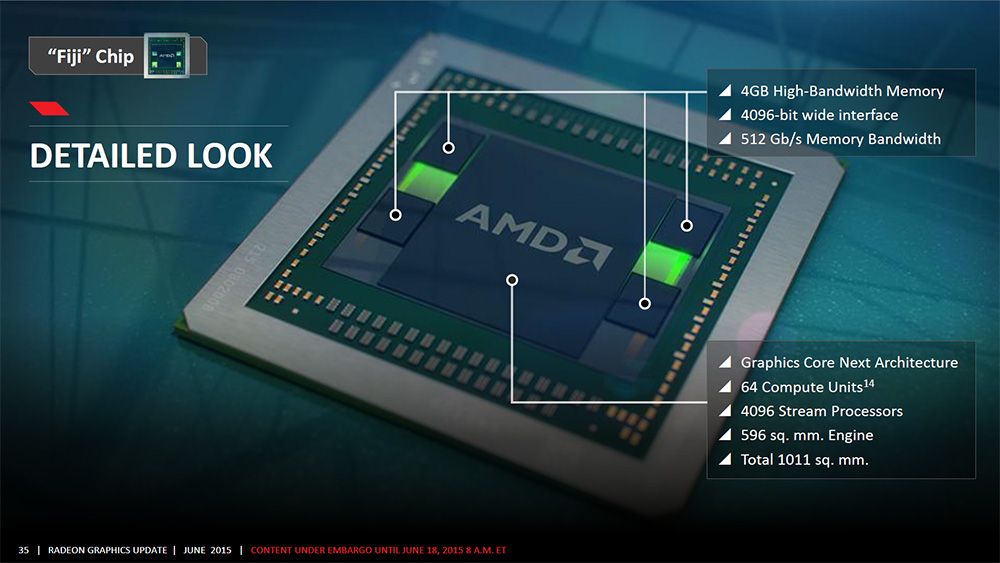 OVerview of AMD Fiji GPU. As you can see, everything is revolving around the number 4096.

As new cryptocurrencies become available, as is the case of Ethereum and Zcash, more and more people try their luck in mining. Even the difficulties increased in BitCoin (BTC), the record growth over the past 12 months (365 days ago, BTC traded at $579.35. Today it trades at $2783.43) got people investing in purchasing mining computers. This increased interest in mineable cryptocurrency has led to a virtual lack of availability in shops of high performance video cards, and specifically all AMD-based GPUs since 2009, from 7000-series until today’s RX580 videocards from AMD. These cards are basically nowhere to be found. We received comments from some of our readers and partners that they tried to purchase even a four figure order (1500 GPUs), and the reply was “no stock”, even if they offered a $150 price premium. What will this make of Back-to-School season, nobody knows.

Wanna-be miners look specifically for AMD Radeon video cards since they are historically better than NVIDIA counterparts in such a specific task, but recently some miners, although more oriented to the specific cryptocurrency Zcash, have been developed to work with the Pascal architecture.

This increased interest in mining-dedicated videocards has, obviously, put an enormous strain in the supply chain, and most probably the same will happen with NVIDIA cards as soon as the interest in cryptocurrencies goes full blow. Remember that even the $15,000 Volta-based Tesla could become a prime mining interest if Zcash or a similar architecture manages to take advantage of those half-precision and Tensor units – 25 TFLOPS of compute power in 300W changes the balance sheef if you need 4-5 200 Watt cards. Mining is all about 24×7 compute under a full load. Take a look at the video below, with ASRock capitalizing on the mining craze with no less than 14 GPUs being capable of hooking up onto a single motherboard. This is the sheer demonstration of how GPGPU or GPU Compute changed the world… albeit for creating real, physical money.

Hence both GPU manufacturers are facing a daunting challenge. They cannot afford to put too much strain on their mainstream product lines, historically dedicated to fast-growing gaming market, with gamers only wanting to play the last generation FPS and those customers who are now witnessing price spikes and lack of availability.

NVIDIA is in fact rumored to be already developing a special edition of its GeForce GTX 1060 with a dedicated version of the GP106-100 GPU specifically targeted to mining enthusiasts, and so is AMD with a new Polaris 20 GPU. Such cards will be significantly cheaper than their normal gaming counterparts. The reason for that is very simple – the new mining GPUs should lack some features that are not really needed in a mining environment, such as display outputs and fancy looking coolers, although – and this is an educated guess – considering that these type of video cards are to be left working at 100% the whole time, it is fair to think that big chunky coolers will still be used, even if we would see a dedicated liquid cooling system as the best option here, but this is only our opinion. Our sources could not confirm that the new, 90 day warranty will stretch to regular production line, or will the mining cards receive completely new product branding. In case of one vendor, don’t be surprised if such card comes to the market wearing a marking “NAME GPU NAME X GB Memory). “AMD Polaris 20” or “NVIDIA GP106-XXX” would be interesting names, to say the least.

Distribution of such video cards could happen through usual add-in board partners and prices, as said before, should be conveniently lower than gaming alternatives. All in all, it looks like GlobalFoundries and TSMC will have their hands full on producing chips, and we would not be surprised if even the 50% functional chip ends up on the market, for as long as it can provide any amount of Hashes/sec.