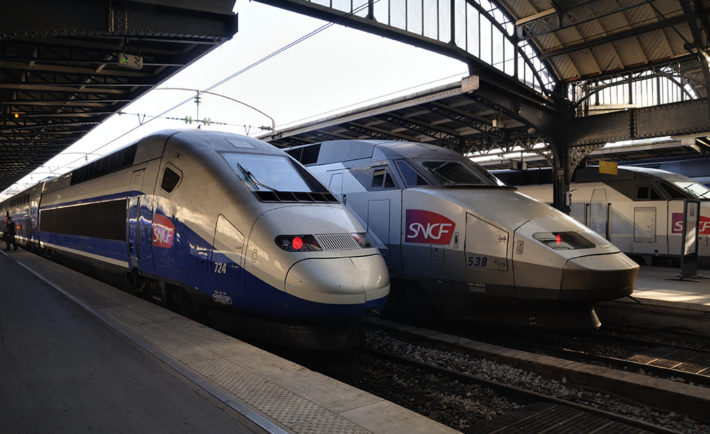 French railway operator SNCF (Société Nationale des Chemins de fer Français), known worldwide for its TGV bullet trains announced today that it is adding Virtual Reality on its Paris – Milan route. This 877 kilometer, 545 mile route, which takes seven hours to complete is now enabling travelers to spend a part of the journey in an IMAX-sized theater, enjoying dozens of movies.

According to the press release, “this all-in-one entertainment solution is developed by Franco-American company SkyLights to transform the on board customer experience. It includes lightweight and comfortable VR headsets, noise cancelling headphones and a Hollywood content catalog to ensure total passenger immersion. Hidden Figures, The Revenant, X-Men and Ice Age, among others, make up the catalogue of twenty 2D / 3D films, which will be renewed every month to incorporate recent releases. To meet the needs of an international clientele, most of the films will also be available in several languages (French, Italian and English).”

At the beginning of the journey, Stewards will pass through the carriage and offer the 2nd Generation VR headset running a demo mode. Those that are enticed by the VR experience can order and pay the steward directly. After signing a rental contract, featuring their passport or identity card number, they will be brought the immersive video headset. In the first stage of this program, SkyLights solution is available to First Class passengers for 8 € per journey. Should the trial turn to be a success, there’s little doubt SNCF and SkyLights will roll out this service on longer sectors across its network.

We already wrote about SkyLights when they launched a trial program with XL Airways, putting VR headsets into the planes. The trial project successfully ended by deploying the headsets across the long-haul fleet. Second design win came from Corsair airline. The link between the planes and VR is not surprising given the background of the French-American company. Founded in 2015 by David Dicko (former Air France exec and pilot) and Florent Bolzinger, VR enthusiast with a PhD in Biomechanics. Offices are unsurprisingly, in San Francisco, Paris and Tolouse (near TLS airport where Airbus makes majority of their planes).