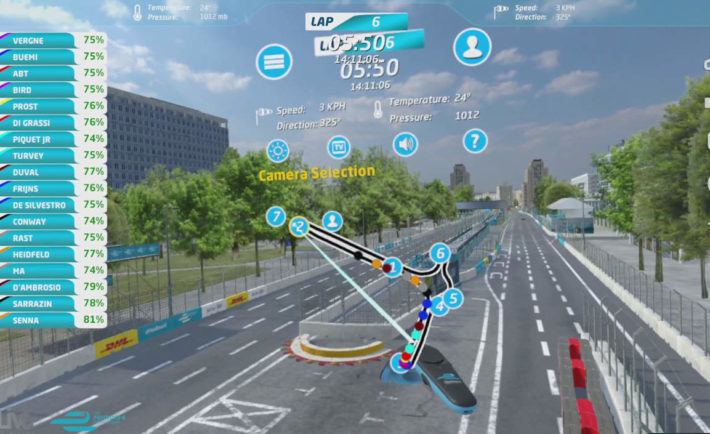 It is one thing to watch Sebastian Vettel and Lewis Hamilton take on the famous Grand Hotel Hairpin bend by Fairmont Hotel in Monte Carlo’s Formula 1 track while sipping on lemonade and sitting comfortably on your couch. It is another to be sitting in the car itself, calculating every inch of that upcoming u-shaped curve, braking and accelerating at the most precise of times. Ever wonder what that’s like? Well, put your lemonade down and get your VR headset on, because one San Francisco-based company is doing just that – placing you directly in the driver’s seat. It is just the Formula E circuit for now, not Formula 1 per se, but you get the point.

Virtually Live creates true VR experiences in CGI by tracking physical live events and transposing the action into a fully rendered virtual environment, delivered live to fans via VR headsets. Take the most recent Formula E race in Montreal, Canada. You place your gadget on and escape into a digital venue – the racetrack and its surroundings with carefully rendered city architecture. If you live in the city, you’d be quick to recognize the central Rue Viger and Rene Levesque Boulevard streets. Such experience allows fans to participate in live events in a way that’s more immersive and personalized as ever before.

Last year we spoke to company’s CEO Tom Impallomeni about the company’s technology and mission in the field of VR sport broadcasting. A year of content development and drastic improvements in tech, VR World had the chance to take a first-hand look at what it’s like to be in the middle of the race by test-driving (pun intended) Virtually Live’s social VR application at company’s presentation booth at a recent Formula E event in Montreal. We found the live VR stream nearly as fast as traditional broadcast feed, thanks to a combination of cloud computing and proprietary algorithms. The accuracy of CGI renders and near live feed puts the company in a good position to expand its offering to events beyond motorsport. Oliver Weingarten, Virtually Live’s sports rights and partnership advisor, says the company is in talks with other property providers, both in sport and music industries, but for now confirmed motorsport being their core focus. It makes perfect sense – Formula E has been such an innovative series that the marriage of two makes it a great platform for Virtually Live to experiment with and improve. And the company wastes no time. And they do it quickly.

“[The technology] is constantly being evolved,” adds Weingarten. “Every time we upload our app with a new race, it has improved and often has new features, whether they be social, or gaming.” He hinted that live ghost racing against drivers in real time is the next big exciting step.

The real challenge in making the experience as close to real and true as possible lies in the accuracy of data. Virtually Live heavily relies on data, which they are willing to ingest as much as possible as long as it stays accurate. Then there is tethered headset growth, road blocked either by cost or the perception of not being the simplest thing to use. Weingarten, however, is staying bullish: “PSVR is a real opportunity given the number of PlayStation 4 in the world, and if a small percentage of those owners buy the respective VR headset, the audience will grow substantially.”

In spite of the challenges, the road has been progressing nicely and the download figures for the company look healthy, as the company has been targeting a new demographic of gamers and early adopters through Formula E circuit. At the end of Season 2, Virtually Live uploaded highlights of that Season, and during Season 3, which just finished, the company has been uploading races on a regular basis.

The California-headquartered management’s gameplay stays open to existing and new upcoming viewing devices (be it in augmented reality, mixed reality or virtual reality) by continuing to create content cross-platform and being agnostic in that respect. Users can watch via iPad, mobile, PC or tethered VR headsets: HTC Vive (through Steam VR and Viveport) and Oculus Rift.