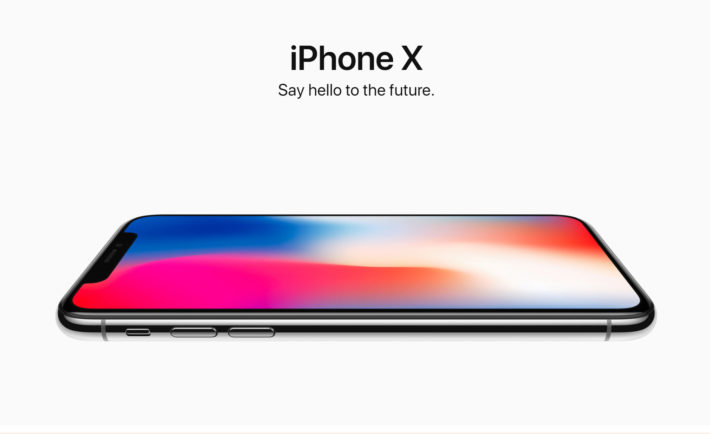 At the very first event in Steve Jobs Theater at its new headquarters, Apple Inc. announced a series of devices, including the new smartwatch “Watch Series 3”, iPhone 8 and 8 Plus (realistically, these are iPhone 7S and 7S Plus) refreshments, and the king of the event – a $1000 iPhone X (pronounced ten), with X marking 10th anniversary since iPhone 2G came to market. All three phones are powered by a powerful A11 Bionic SoC processor, bringing a set of next-generation features to all three phones, with Augmented Reality and FaceID perhaps being the most impressive ones.

Augmented Reality, in that way, superimposes digital information onto a person’s view of the real world. According to Bloomberg, the iPhone X, Apple’s most expensive phone ever, was one of three new models Chief Executive Officer Tim Cook showed off during an event at the company’s new $5 billion headquarters in Cupertino, California, on Tuesday. Some analysts expect it to drive hundreds of billions of dollars in extra device sales in coming years.

The new iPhone X has its screen, 3-D sensors, and dual 60fps cameras designed for AR video games and other more-practical uses such as measuring digital objects in real world spaces. Few months  ago, Apple released a development tool called ARKit that enabled developers to add AR capabilities to their apps. The Verge has a good article about the first generation ARKit-developed apps. The company is allegedly now working on AR-enabled smart glasses, and while Apple was slower to AR market than Google, the widespread adoption of iPhone might end up with Apple taking over Google. The search engine giant launched an AR software platform called Tango back in 2014, but over-reliance on shifting corporate strategies from Texas Instruments and Intel meant that unfortunately, Google still does not have AR devices for the consumer market.

Just for a reminder, June 2017 saw Apple releasing ARKit, likely to be the first AR platform to be embraced by tens (and quite possibly hundreds) of millions of consumers. Devices like AR Mira were released ahead of this launch, betting on device compatibility. That came as a surprise considering how many years Google has spent researching their AR options. Three months later, Apple has not one but three products actively supporting their development platform. This pace of development puts Apple in pole position to capture larger market share than the incumbents such as Google or Microsoft. In short, Apple’s AR platform is likely to see stronger consumer and developer adoption than Google’s for reasons because of its ability to push the ARKit software to hundreds of millions of new and updated iPhones at once.

In the long-term, though, Apple and Google’s early battles for AR leadership will probably be forgotten. More important will be how much AR, whether on phones, tablets or headsets paired with phones, would make many consumers rethink what their mobile devices are good for.

Regardless of how the AR glasses market plays out, the AR experiences due to be delivered on smartphones should be enough to occupy the imaginations of developers and consumers in the short-term. For now, Apple will play a bigger role than Google in doing this, but things should even out within a couple years’ time, if not sooner. In meanwhile, regardless of what smartphone platform you are using, one can always install Pokemon Go as an entertainment app or FlightRadar24 for a utility app and see what benefits or entertainment value can AR bring into everyday lives.

The AR market could be worth $404 billion over the next three years, with $286 billion from purchases of new devices and the rest in software and services, Morgan Stanley estimated this week. In the most optimistic scenario, that would lift Apple’s 2019 earnings per share 27 percent higher than consensus estimates, the analysts wrote.