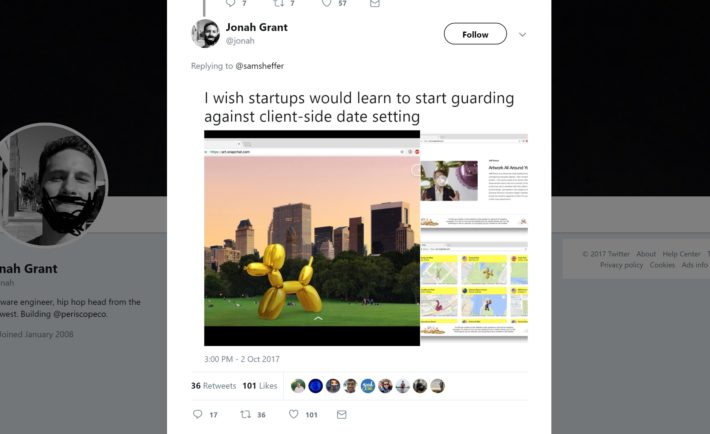 Snapchat plans to launch a new art initiative aimed at using augmented reality to feature art installations around the world. A countdown clock magically appeared, and a snippet of javascript underlying the page appears to confirm that the reveal is a collaboration with renowned artist and big Snapchat fan Jeff Koons.

The only piece of art on the site is a photo of Central Park in New York City with people sitting about in an open lawn. However, dogged software engineer and Twitter user Jonah Grant uncovered the secret by setting his clock ahead.

According to the screenshots, Snapchat is calling on artists to submit their portfolios to the company. Snap previously embraced artists for in-app geofilters, but its AR community has remained closed until now. That’s quite unlike both Apple and Facebook, which have released developer platforms for AR.

It’s unclear exactly how the art project will manifest in the real world. But it will likely involve digital works designed by Koons that appear in real-world locations, geo-locked to a user’s location in ways similar to Niantic’s AR mobile game Pokémon Go.  When Koons’ “Balloon Dog,” a giant stainless steel recreation of a balloon animal, sold for a record-breaking $58.4 million in 2013, Koons posted a self-congratulatory selfie on Snapchat.

Facebook announced in April its plans to pin augmented reality art to real-world locations. But its preview of art by Heather Day akin to a graffiti mural was much smaller than the massive installation art pieces shown off in Snapchat’s photos and video shown above. Snapchat seems to have beaten Facebook to the punch.