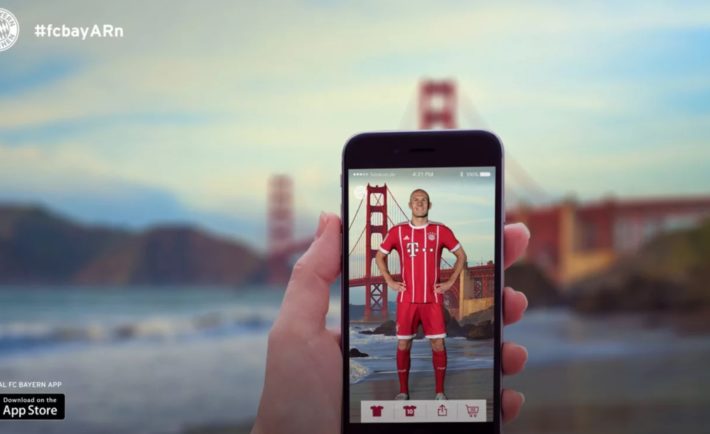 FC Bayern has launched an Augmented Reality feature that enables fans to create a mixed reality experience with its star players. The experience, which is one of the very first in soccer, enables users to view players anywhere in the world whether it’s at home or in Times Square, New York.

Fans will be able to use their mobile device camera on any flat surface to make team captain Manuel Neuer or forward Arjen Robben appear, giving them the option to jump in and take a screenshot photo with the Bayern stars.

Robben is an international star, having played for PSV Eindhoven, Chelsea, Real Madrid and Bayern Munich, as well as for the Netherlands national team in four FIFA World Cups. (He just retired from international competition after the Netherlands missed the cut for the 2018 World Cup). Neuer was the captain of Germany’s national team for its 2014 FIFA World CUP championship, during which he also won the Gold Glove award for best goalkeeper.

“This augmented reality feature offers fans a playful, unique and immersive opportunity to get closer to the team they love whether they are based in Munich, New York or Mexico,” Stefan Mennerich, the director of media, digital and communications for Bayern Munich, said in a statement.

To celebrate the launch of this AR feature the club is asking fans to post their screenshots with Neuer and Robben using #fcbayARn via social media. The team will then select the most creative photos and curate them in the app and on the website.

This experience is accessible exclusively in the “AR Arena” on FC Bayern’s official app available for free download in the Apple App Store on devices with iOS 11, A9 and A10 processors.