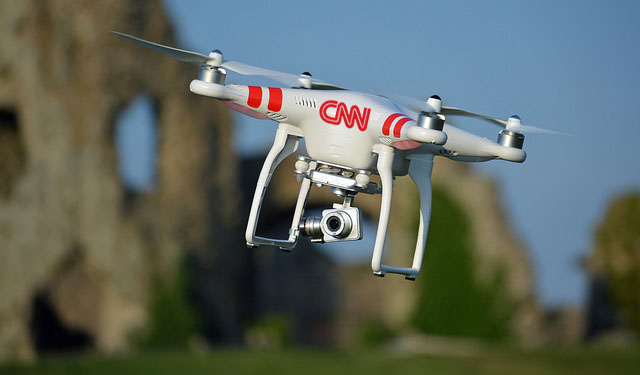 The U.S. Federal Aviation Administration’s Small UAS Rule (also known as Part 107) has provisions to obtaining waivers to the usual requirements for flying drones in the United States. For example, you’re not generally allowed to fly drones at night, although the FAA has granted quite a few waivers allowing flight after dark.

But another rule is that you can’t fly drones over people who are not part of your operations, and until about a week ago, the FAA hadn’t waived that rule for anybody. Now it has, for CNN. The FAA is allowing the cable news network to use a drone to obtain video over uninvolved people, even crowds assembled at places like sporting events.

Greg Agvent, CNN’s senior director of national news gathering technology, said the waiver “has a meaningful and practical application to our newsgathering.”

Easier approval for flying over people is a crucial step toward the use of commercial drones in cities, such as for deliveries.

Under a comprehensive package of rules finalized last year, commercial drones weighing up to 55 pounds are generally allowed to fly during daylight hours within sight of the pilot and while avoiding people not associated with the flight.

CNN clearly has a huge responsibility to ensure its future drone flights over people are carried out trouble-free. Indeed, part of the application for the waiver included CNN having to prove the drone operator’s “safe history of operations.” Should the news company’s drone efforts go off without a hitch, it should pave the way for other businesses looking to make use of drone technology in an ever-greater range of scenarios.