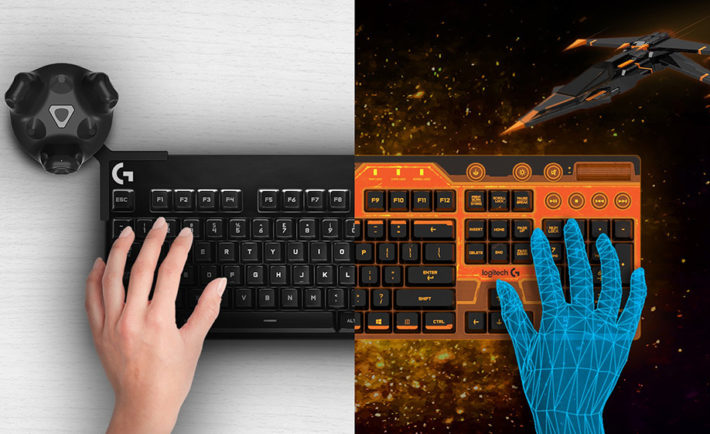 Logitech yesterday announced the availability of the BRIDGE developers kit, an SDK intended to assist application developers with the challenge of effectively enabling text entry in virtual reality environments.

“The developer’s application does not need to manage anything; the overlay appears automatically as soon as the associated Vive Tracker is turned on,” explained Logitech’s Director of Innovations and Strategy, Vincent Tucker.

As for the rationale for this system, Tucker stated that although keyboard use in virtual environments is often necessary to input text, it does not feel natural.

This is particularly true, he says, when one needs to utilize application software, “particularly in productivity-driven or desktop scenarios, but also in games, social applications and content browsing.”

Among the more interesting features of the BRIDGE architecture is the ability to augment keyboards by taking advantage of VR to modify key fonts, colour schemes, and even perform application-specific key highlighting.

“We believe that a physical keyboard should be present, as it delivers essential tactile feedback and a universal experience that people value,” Tucker clarified. “Whether you are using a keyboard for gaming, communication or productivity, it is an effective and efficient tool.”

Having that “effective and efficient tool” available is also critical as the web becomes increasingly intertwined with VR technologies.

“Enabling the Web is critical to the expansion of VR and having a keyboard is essential to making that happen,” said Diego Marcos, A-Frame API designer at Moziilla. “That’s why we’re excited about the work Logitech is doing on this front.”

Because the architecture is still in beta and presented as a proof of concept, no wide release date is currently available. However, a limited number of US-based developers are currently being invited to apply to beta test the platform.