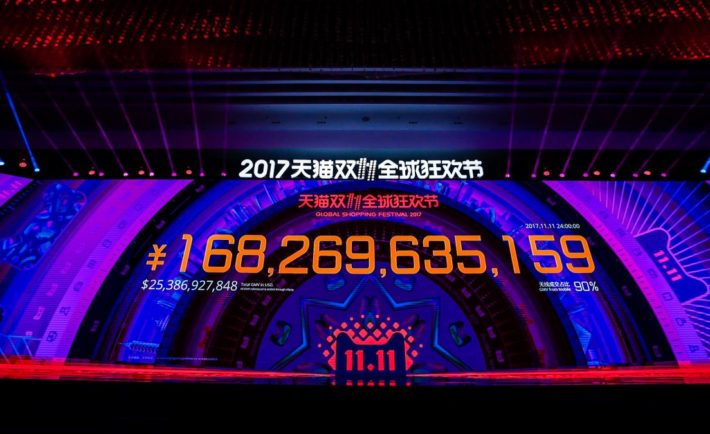 Alibaba’s Singles’ Day Shopping Festival is like no other. If you may think of an Academy Awards, Superbowl and Shop-Til-You-Drop combo – you’ll get a rough perspective of what this celebration of consumerism may look like.

This e-commerce giant started working with more traditional retailers to market discounted lobster, iPhones and refrigerators to shoppers from at least 225 countries and regions.

With an enormous amount of consumer data, Alibaba exploited AI technology to achieve this. Already last year, Alibaba was excited about integrating VR and AR into shopping. This year, however, the buzzword was “New Retail,” which uses big data to seamlessly integrate online and offline activities.

Specific about the whole shopping experience was also the fact that automation, robots, AI and machine learning were widely applied to all aspects of the annual shopping ritual, right from product selection to delivery. As consumers scrolled up and down the company’s shopping portal for their favourite products, Tmall Smart Selection, an AI-powered recommendation algorithm was helping buyers to make a decision.

He said that compared with seasoned fashion industry professionals, big data and AI would excel in picking products such as clothes where there are numerous brands and variables if evaluated manually.

Don’t forget that in October Alibaba (BABA) recently teamed up with other investors such as Samsung (SSNLF) to raise $40 million for the Beijing-based artificial intelligence (or AI) startup DeePhi Tech in a series A+ funding round. This funding round was implemented through Alibaba’s Ant Financial subsidiary.

Alibaba recently unveiled a plan to invest $15 billion in R&D (research and development) work focused on foundational and disruptive technology.

As such, Alibaba’s R&D fund would be directed toward developing IoT (Internet of Things), AI, and data analysis technologies.