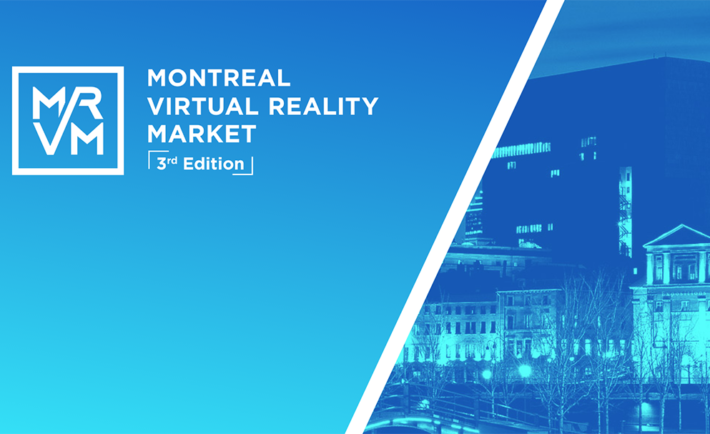 November saw the third instalment of the Montreal Virtual Reality Market – an industry gathering held in Montreal. With over 50 virtual- and augmented reality companies located in the city, Montreal is well positioned to burst in the VR industry: four engineering schools, massive video gaming industry (Ubisoft, EA, A2M, Gameloft to name a few), world-renowned filmmaking and developed IT market surely makes for a lot of qualified skills floating around here. We visited the event nestled at Societe Des Arts Technologique (Technological Arts Society) to check up with the AR/VR startups coming out of this French-speaking city and converse with some of them.

Drone Volt’s Canadian branch filled their exhibitor booth and air space above it with all kinds of custom-made drones, one of which steals the show – it is the first drone dedicated to virtual reality. Janus VR 360, which retails for over $15,000, is equipped with with 2 gyro stabilized OMNI rigs on which 12 4K cameras are attached. This allows to record 80 frames per second videos from which quality virtual reality content can be created.

Apart from a few pieces of VR content, Productions Figure 55 team was demoing a new app called SyncVR, which is able to control up to 40 VR devices such as headsets at the same time. Company’s producer Pascal Pelletier mentioned the company was able to introduce their content to nearly 300 people in under 3 hours as a result. SyncVR can potentially have a very wide reach, especially among VR entertainment centers which are popping up around the world, and most recently in Figure 55’s own backyard so-to-speak. IMAX and Cineplex have just announced the launch of Canada’s first VR center at Scotiabank Theatre Toronto this week. According to company’s statement, by leveraging premium VR headset technology, 360-degree sound and sophisticated room tracking, they are able to transport players into new and interactive virtual worlds.

Rodrigo Vergara, Chief Evangelist of iAmGeniusVR and keynote speaker at the event, has exclusively announced to VRWorld.com the upcoming release of company’s app “VR 360” (coming by end of 2017). In the words of Vergara, the app represents company’s attempt to bring quality curated content to the world with the ultimate ambition of becoming “Netflix of virtual reality content”.

Christian Eve-Levesque, CEO of SpherePlay, has made waves in the industry early on. Together with the second founder of the company, they developed the first open source VR player for Android. The app did well and when Google Play Store checks started coming, Eve-Levesque built SpherePlay – a suite of VR media players that enables broadcasters and publishers to integrate virtual reality experiences to their existing media distribution workflow via their own apps and websites. As virtual reality revolutionizes traditional television experience, SpherePlay is hopeful their place in that new space will be profitable for them. And with a recent $1.26 million investment from Anges Québec (Angels of Quebec) they have more time and resources to get themselves there.

Real estate is one of the few industries that is getting actively innovated with the help of both augmented and virtual reality technologies. From VR-based property tours to 3D engineering modeling to AR furniture shopping – many companies are already competing in this space. One of them, SmartPixel.tv, is doing things slightly different. Working across different platform and devices, from multi-touch screens to HoloLenses, SmartPixel.tv is in control of both hardware and software. According to Alexandre Lacoursiere, company’s project manager, the team has doubled over the last year, which signifies how accepting the real estate industry has been of the new tech.

Overall, the Montreal Virtual Reality Market has shown a promising development of city’s AR/VR scene. How far the exhibitors can go from here is still an open question, but with next “market” being planned for spring 2018 and the extra-inspired mood of vendors, nobody shows any sign of slowing down.