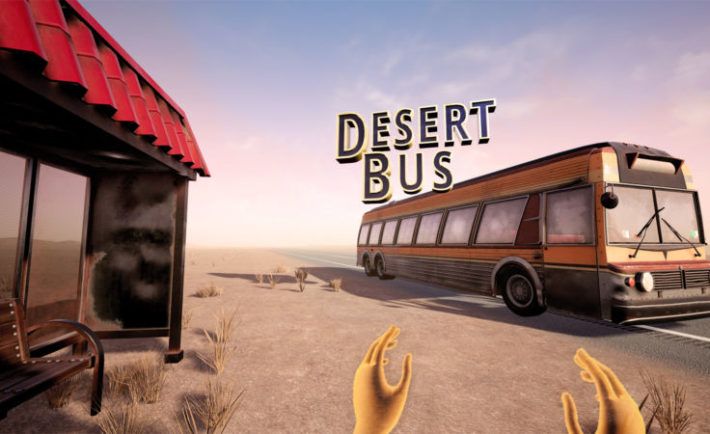 What was once called “most boring”, “the worst” but also “cult” and “legendary” bus simulator Desert Bus, now got its VR version. Yes, that’s right, now you can have all the thrill of an eight-hour bus trip with no breaks in VR. It lets you experience what it’s like to be at the helm of the action, driving all the way from Tucson, Arizona to Las Vegas, Nevada, in real time.

Based on the 1998 Sega CD game Desert Bus, created by the magic and comedy duo Penn and Teller, Desert Bus VR stays true to the original game’s premise, tasking the player with driving a bus between Tucson and Las Vegas without the ability to pause or drive above 45 mph, this time in virtual reality.  It was intentionally designed to be as boring and unobjectionable as possible, coming in the mid-1990s during the moral panic over video game violence that gave rise to the Entertainment Software Ratings Board.

Studio Dinosaur Games added a few other features, including several radio stations that have “variety of engaging radio programs” featuring Penn Jillette, the illusionist/actor and one-half of the game’s namesake. You also can honk the horn, open the door and flick the air freshener. What a thrill, isn’t it? If you veer far enough off the road, a tow truck will take you back to the start.

One thing it has over the original, though, is multiplayer, meaning that three friends can share your misery but also “sit, wave, and even throw wads of paper at the driver,” according to the description.

The game is also playable outside of VR, so if you don’t own an Oculus Rift or a HTC Vive you can still play. We’d expect to see this iteration of the game feature heavily in future Desert Bus for Hope charity events.

The launch follows last week’s annual Desert Bus For Hope, which raised more than $650,000 for Child’s Play. While the game is standalone, and not among a bundle of other mini-games as initially promised, it certainly helps that it’s free. Anyone after an authentic experience about driving a bus in a desert, consider yourself lucky.