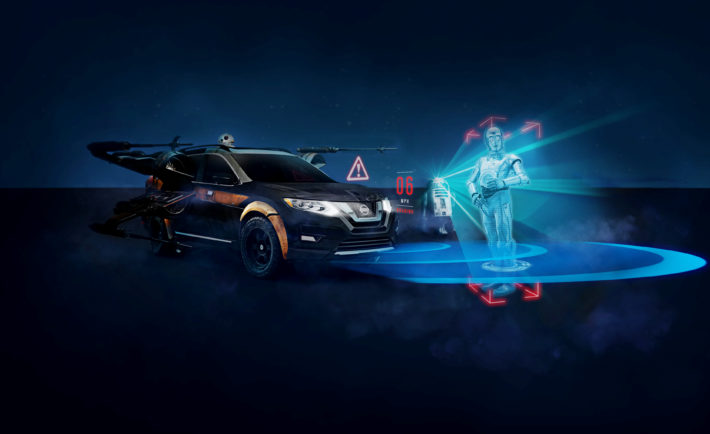 Nissan is poised to unveil an augmented reality experience throughout their North American showrooms that intends to educate customers on the automaker’s safety- and driving assistance-related technologies.

The Nissan “See the Unseen” experience, which leverages characters from the Star Wars universe including stormtroopers and droids, will be rolled out by early December, preceding the upcoming release of Star Wars: The Last Jedi.

“In our collaboration with Lucasfilm’s Star Wars: The Last Jedi, we have brought ‘Retail Theater’ to Nissan showrooms and found exciting ways to engage customers with a new world of technology,” explained Jeremy Tucker, vice president of Marketing for Nissan North America.

“While the competition is focused on Santa Claus and red bows this holiday season, we are filling our dealerships with stormtroopers, Virtual Reality and the new Augmented Reality Experience, making the Nissan shopping experience much more fun, engaging and educational.”

Visitors to Nissan showrooms will don an augmented reality device to learn about technologies such as automatic emergency braking and blind spot warning on Rogue, Maxima and TITAN vehicles. Throughout the experience, the virtual Star Wars characters will demonstrate these safety technologies.

“Driver assist technologies can seem like fantasy to consumers and can be intimidating to those who are unfamiliar,” said Tucker.

“With the help of the beloved characters from Star Wars and the ‘See the Unseen’ augmented reality technology, we are able to explain Nissan Intelligent Mobility in a way that is relatable and fun.”

Notably, this is not the company’s first attempt at using augmented reality to market their vehicles. In 2010, Nissan released a PC and Mac-based augmented reality app that leveraged webcams to help explain features of the then new Nissan Juke.