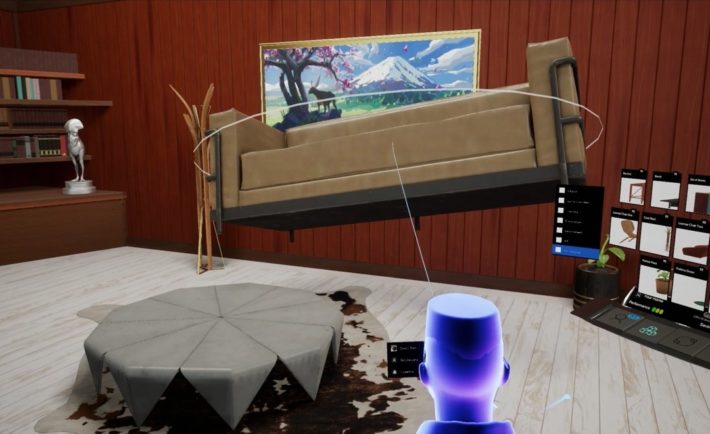 Facebook’s VR subsidiary started offering a pre-release version of Oculus Home, a virtual room that you can outfit pretty much however you want. Think of it as a computer-generated IKEA catalog which now turns to a fully customizable environment that you can decorate with furniture and various interactive objects. You’ll have a catalogue of several hundred items to pick from, but some will need to be unlocked by completing in-game achievements or other challenges. You will also be able to visit friends’ space, and Oculus says it’s working on a real-time hangouts feature for multiple users to build together.

Oculus announced that Rift Core 2.0 beta is now rolling out for all users on the public test channel. Besides the Oculus Home, there are two more changes to the Oculus Rift interface. One presents a brand-new system interface called Dash, that changes the way you interact with Rift by brings your PC applications into VR.  The Oculus Desktop feature in Dash lets you access your Windows PC alongside different applications like Chrome, Notes or even YouTube. Now you can just watch videos or browse the net using just the Oculus headset. Second thing is redesigning Oculus desktop app. Now user can report bugs via the Help Center and send Feedback on how to make the VR experience better.

In a blog post, Oculus talks about having launched Touch controllers a year ago today, and that Rift Core represents a new chapter for the company.

“Touch was a major milestone for Oculus and for VR. Hand presence unlocked an entirely new mode of input that made VR more natural, intuitive, and tactile. The next step was to rethink the core experience from the ground up. The result is Core 2.0,” Oculus explains.

To participate into the Oculus Core 2.0 beta, Rift owners have to join the Public Test Channel. Testers should also provide detailed feedback so that the development team can address some of the ways its currently “rough around the edges,” and introduce new features in a timely manner.