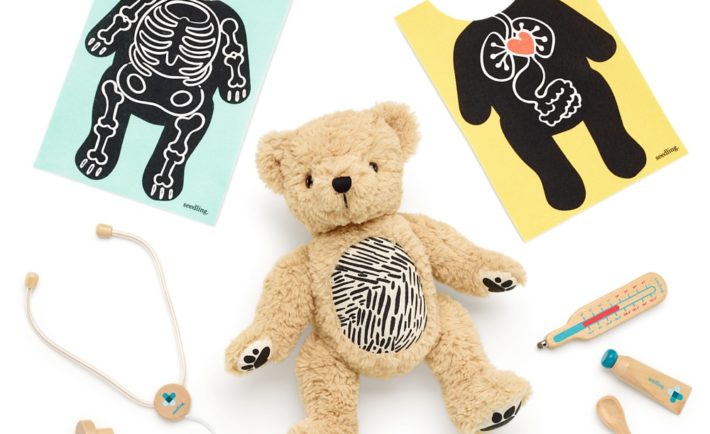 I guess many of us remember Tamagotchi or Furby. Those first tech-enhanced toys were already then thought of as a “parents nightmare”. They were blinking, beeping (often in the middle of the night), they needed batteries and sometimes they were a cause of a humongous amount of child tears (when mum accidentaly washed it).

However, nowadays it’s easier to live (at least for parents). Parker: Your Augmented Reality Bear is a new iPad and iPhone-enhanced toy from Seedling. This charming bear is fully squeezable with no caveats: it doesn’t have any wires or batteries inside, and it won’t make a peep or start to glow if you accidentally step on it while your kid is asleep. Instead, children can use wooden accessories included with the bear to interact with it via an iOS device.

Parker comes with a doctor’s kit, backpack and special X-ray bibs that trigger AR responses in the corresponding Seedling app. Children can diagnose common ailments with the included thermometer and stethoscope, then cure Parker with a medicine bottle and spoon.

You can put a felt skeleton overlay on top of the bear and look at it with your iPad or iPhone camera. Onscreen, you’ll see the bones come to life, sometimes with little smiley faces, or you can watch the digital food that you just fed Parker slide down into his tummy.

Designed for children ages three and up, Parker is considered a STEAM toy in that it offers kids a new way to learn about science, technology, education, arts, and math. As a doctor-style play product, the bear also teaches basic biology.