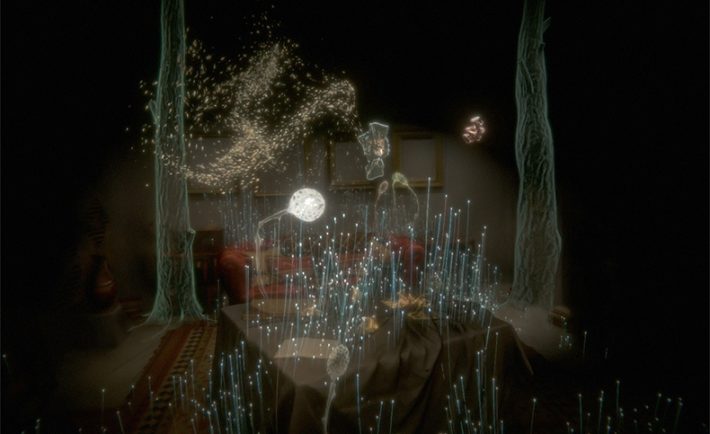 Way in October, Magic Leap, the still-in-stealth-mode company developing an augmented-reality headset, announced that it has raised $502 million in Series D equity funding, led by Singapore investment firm Temasek Holdings. The problem was, that at that time, they just promised to create a headset using a type of light-field technology that would result in superior augmented reality experiences, an area most major consumer technology companies are chasing. But it has never given a launch date for its device, nor offered much detail on how it would work.

But it seems, something is actually happening. They invited a reporter from Pitchfork, an online music magazine, to its offices to check out a new mixed reality app Tónandi created in collaboration with Icelandic band Sigur Rós. The demo, that’s later described as ‘”maddening”, lasted about eight to 10 minutes, and features new music that band made for the app. There are fantastical spirit-like creatures that conformed to real-world objects in the demo room, and interacting with certain virtual objects produced different sounds, such as the singer’s voice.

This came as a confirmation of a last week when Magic Leap CEO Rony Abovitz cryptically promised “fun and cool stuff” from this secretive augmented reality startup. He promises that they are going to be in a space where everyone could become a creative partner at the speed of their own imagination. “That’s one of our goals: You imagine, you say, you create, almost at that speed. Almost at the speed of playing a guitar. You want a car and a bird, just boom boom boom, there’s a car and a bird. You want it to sing opera, ahhhh. ‘OK, stop that, go away,’ boom, they go away. We’re so close to that. It’s not fanciful. You’ll see it happen.”

It is obvious that the company still does not allow anyone to speak of the hardware they have on-hand. From the description of the app, it seems clear to me that they are still on what they’d originally started making – a headset, something in the same realm as Google Glass, HTC VIVE, and the Lenovo Jedi Challenges headset.