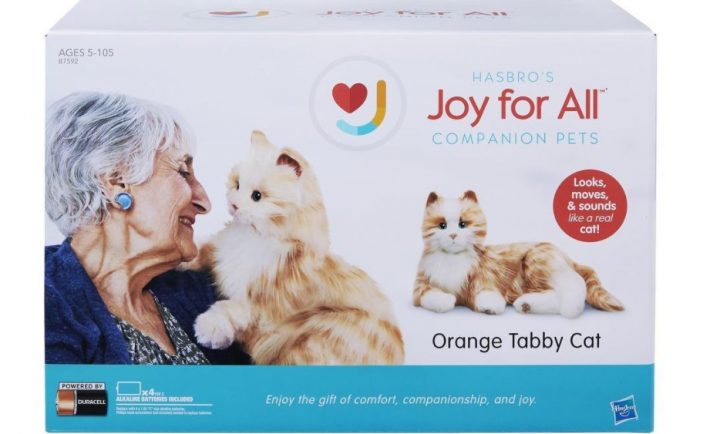 When talking about senior citizens, especially the ones living alone – it’s important to be as empathic as possible. Cats are known as cuddly little creatures, and there are scientific proofs that by just cuddling the cat – you minimize your risk of heart attack.

However, as every living creature, cats need to be taken care off. This little kitty doesn’t. An artificially intelligent ‘robo-cat’ that would keep elderly people company, is currently being developed by scientists.

That’s the vision of toymaker Hasbro and scientists at Brown University, who have received a three-year, $1 million grant from the National Science Foundation to find ways to add artificial intelligence to Hasbro’s “Joy for All” robotic cat .What it does, is that it actually cares for you. It will help its owner to take their medication, help find their spectacles, and may one day feature prominently in care homes, experts claim. It purrs and asks for belly rubs like a real cat, and is designed to help the elderly stem feelings of loneliness, depression and anxiety.

The cat is on the market for two years already and it’s created for seniors and to act as a “companion.” Now, the Brown-Hasbro project is aimed at developing additional capabilities for the cats to help older adults with simple tasks.

This is going to be a three-year project and the scientists hope that additional features will be used to help older adults remain in their homes longer.

Malle didn’t want to make big promises of what the cat can do. As he said, this probably won’t be something he and his fellow researcher, computer science professor Michael Littman, saw in other robots on the market. They just hope to make a cat that would perform a small set of tasks very well.

They also want to keep it affordable, just a few hundred dollars. The current version costs $100.