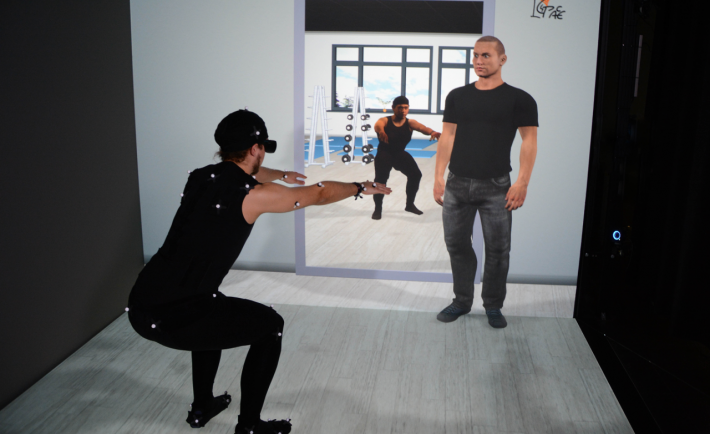 ICSpace is a virtual fitness environment from researchers at the Bielefeld University’s Cluster of Excellence Cognitive Interaction Technology. (Or CITEC for short.) As a blend of VR and AR technologies focused on fitness, ICSpace aims for realism to accomplish its goals.

The most interesting part of ICSpace, however, is how it captures virtual avatars. Virtual avatars are nothing new to gamers, and are common in apps like VRChat as well- but more often than not, these avatars have little resemblance to their real counterparts. ICSpace changes that by using a setup of 40 DSLR cameras to photograph the user from all angles.

Using these photographs, ICSpace can create an accurate, detailed 3D model within 10 minutes or less. This isn’t just a model, either- it offers full capacity for detailed animations, from the fingers, to the limbs, to facial expression. Normally things like this take ages to create and tweak by AAA game devs, but ICSpace can do it in ten minutes.

You read that accurately: within 10 minutes, ICSpace can create a fully-animated virtual avatar of any person photographed with its setup. Now, obviously, most consumers aren’t going to have access to 40 DSLR cameras and a university’s tech setup.

What matters is that this is possible, now. Now that this has been made possible, the technology will only improve and cheapen over time. While it may not yet be relevant to consumers, it’s quite important to enterprise customers, game developers and VR developers. These are the parties who will benefit from this the most.

That said, comment below and let us know: what do you think?