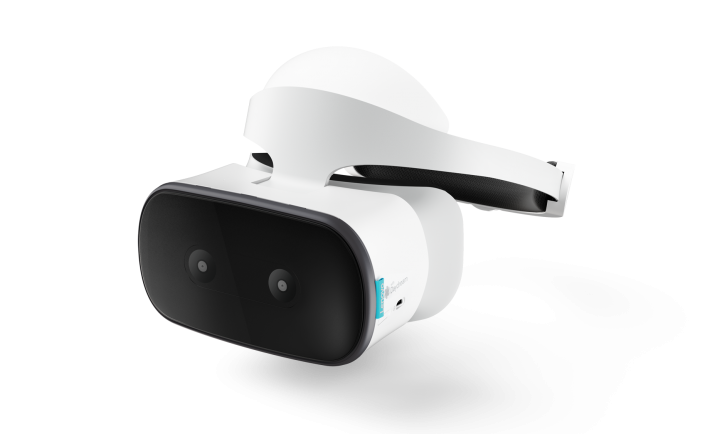 Lenovo used this week’s CES in Las Vegas to highlight several aspects of their 2018 product and service lineup in the augmented reality and virtual reality spaces. These announcements spanned both consumer and commercial/industrial applications, and include the Lenovo Mirage Solo headset, Mirage Camera, C220 Smart Glasses and NBD AH Cloud 2.0.

Billed as a “new take on VR consumption and creation,” this complementary product duo is targeted primarily at consumer markets.

The Mirage Solo stands as the first stand-alone headset offering that is part of Google’s Daydream platform; an ill-fated offering from HTC was announced and subsequently cancelled last year. Like the cancelled HTC Vive Focus, Lenovo’s Mirage Solo is based on Qualcomm’s Snapdragon 835 VR platform.

Sources indicate an MSRP for the headset of around $400 USD, with a mid-year release.

Designed specifically with the Mirage Solo in mind is Lenovo’s Mirage Camera, a VR180 camera featuring dual 13 MP fisheye lenses, and integrated features like direct uploading to YouTube or Google Photos. Internally, it is based on the Qualcomm Connected Camera Platform, has built-in WiFi, and will be available in an LTE version.

MSRP on the base model will apparently be around $300 USD, with a release date around the same time as the Mirage Solo.

Of additional interest are two developments at Lenovo in the growing augmented reality space.

The first AR-specific introduction was of the Lenovo Glass C220, which consists of a very lightweight glass unit and a pocket unit that attaches to a smartphone. It offers a single-eye augmented reality view, with use cases primarily in the realm of work and education.

Pricing and availability on these augmented reality technologies were not available.