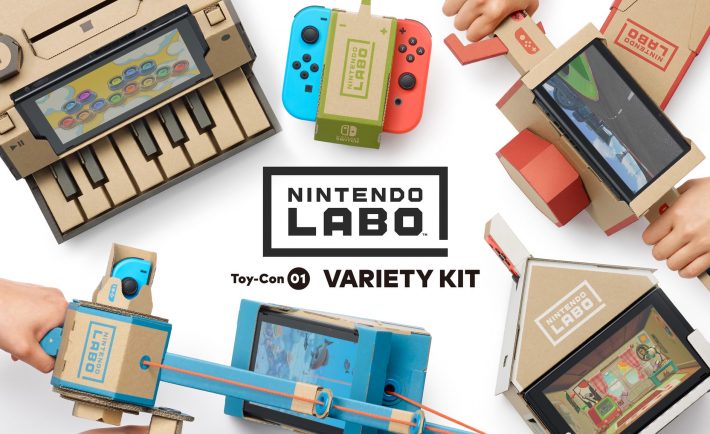 Nintendo Labo is the newest cool weird project from Nintendo. Labo is difficult to define, but perhaps the best way to describe it is an assortment of cardboard-based games and applications for the Nintendo Switch.

Labo comes in kits, and there are two kits at the time of the announcement. The Variety Kit offers an RC Car, Fishing Rod, House, Motorbike and Piano. Each of these peripherals are built with a combination of Joy-cons, cardboard and the Switch itself. There’s also a Robot Kit, which creates a wearable robot suit reminiscent of the previously-canceled Project Giant Robot for Wii U.

If the idea of cardboard-based peripherals sounds familiar to you at all, that’s probably because of Google Cardboard popularizing the concept since 2014. By turning a common smartphone into a cheap VR headset with Cardboard, Google was able to significantly lower the barrier of entry to VR and make it much more accessible to a wider audience.

An astute viewer may ask, though: how exactly is the Switch powering all of these different applications in cardboard? This is easily the most fascinating aspect of Nintendo Labo and it boils down to one key component – the Joy-Cons.

For most people using the Joy-Cons on the Nintendo Switch, they serve little purpose besides being pop-on, pop-off controllers. However, Joy-Cons are actually much more than that. They’re capable of high-accuracy motion sensing, high-quality haptic feedback (called HD Rumble), and most importantly, are packing fully-functional IR sensors.

The IR sensors allow for amazing precision and power experiences like the Piano. With the IR sensor watching the keys move inside the box, this information is relayed in almost real-time to the Switch, ensuring that the right notes are played with almost no latency. In the long-term, this also means that Labo peripherals will be capable of just about anything.

Nintendo may not be making a VR headset, but they’ve taken inspiration from the world of VR — Google Cardboard in particular — and found a unique way to implement it into their own systems. Cardboard-based games, applications and peripherals powered by the Switch and its Joy-Cons represent a clever use of the technology.

Thanks to the cheap nature of cardboard, gamers will be able to easily replace any damaged components. Nintendo will be releasing designs for the cardboard kits online at some point as well, meaning those with the means will be able to make it themselves or even enhance the experience by 3D-printing the appropriate components instead.