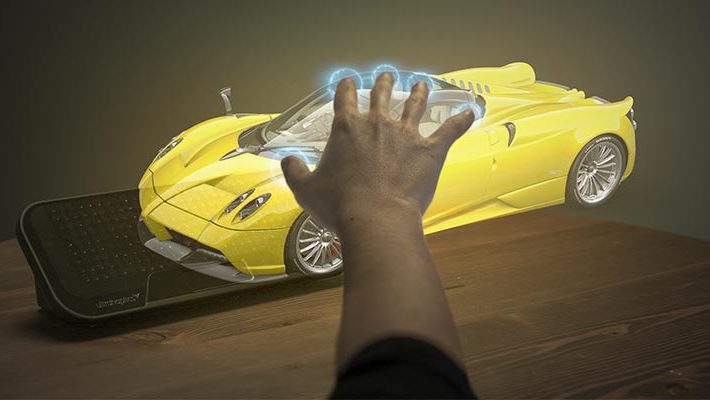 A Pagani car is displayed in AR along with an ultrasonic haptic device. Photo credit: Ultrahaptics

Although VR headset technologies continue to improve, with a number of new technologies slated for release this year, and with a long-rumoured Apple AR device potentially in the works, it’s easy to lose sight of the fact that there are several more senses beyond sight and sound. And, because virtual taste technology appears to be nowhere near commercialization, and the only commercialized virtual smell technology remains in pre-order phase, sniffing virtual roses or eating a virtual slice of cheesecake are likely a long way off.

Those looking for a bit more sensory engagement in virtual and augmented reality can take heart, however, because a number of emerging “haptic” (touch) innovations are rapidly improving the overall reality of immersive environments.

The trio demoed a three-sense set-up that allowed CES visitors to see, hear, and feel a Pagani Huayra Roadster in augmented reality. The technology that empowered the haptic component is based on ultrasound — reproducing tactile feedback on the user’s hands, thereby allowing them to touch and feel objects in the augmented reality environment, but still allowing normal movement.

“Touch is intrinsic to our understanding of the world and how we interact with it. This shouldn’t be lost when we interact with digital media and virtual objects,” explained Anders Hakfelt, Vice President, Product and Marketing, Ultrahaptics.

Ultrahaptics is currently working with a variety of other companies to bring their technologies to other devices — including an augmented reality slot machine and futuristic ATM, as well as in various automotive contexts.

“By stimulating contact with digital models, we can amplify the overall impact and response of each digital interaction,” he said.

Transmitting haptic “signals” to hands has a long history, with some of the earliest use cases including aircraft control “stick shakers” to warn of impending stalls. Into the 90s we also saw haptic handheld technologies integrated into devices like video game controllers and force-feedback systems integrated into digital steering wheels and flight sticks.

Unsurprisingly, several emerging technologies in the area of hand-worn haptics build on both that technological tradition and a desire to make virtual reality all the more realistic. Among these are the Sense Glove, an exoskeleton-like device (available for pre-order) that gives both haptic and force feedback to users in VR environments.

A video example of Sense Glove is below:

A seemingly competing device, which will apparently have some availability this year, is HaptX, Inc.’s HaptX Gloves, billed as “the world’s first industrial-grade haptic gloves.” Realism, in terms of being able to touch and hold virtual objects, is the primary focus of this product.

“HaptX Gloves will allow our customers to get more out of their VR applications—whether they’re administering virtual training, designing three-dimensional objects, or developing a VR game.”

Also prominently featured at CES are several developments in the area of wearable haptics. Building upon their existing chest-strapped Snap haptic device, Woojer will be releasing a vest-type haptic product early this year. Aptly named Vest, the device can simulate the tactile feeling associated with sound effects — the company cites explosions, rainfall and wind as examples — or subsonic tactile effects.

And, a still more immersive haptic environment looks possible with the soon-to-be-released Teslasuit. A full-body wireless haptic suit, this upcoming product offers a range of features from motion capture through to touch, weight, and even climate simulation — the latter meaning users can feel simulated cold and hot sensations that match up with the VR environment.

“We wanted the Teslasuit to erase the difference between the virtual and the real worlds,” explained Dimitri Mikhalchuk, CEO of Teslasuit Project.

Teslasuit also has a range of use cases. Although gaming is of course one area Teslasuit may excel, the company sees many other possibilities.

“We see its potential future use in a variety of different sectors including manufacturing, automotive, healthcare and medical fields in particular for use in rehabilitation, biometric data set building, collection and data management,” added Mikhalchuk.

In summary, creating truly believable virtual reality experiences is not just a function of screen resolution — other senses, particularly touch, must also be engaged to achieve what could be considered a complete experience. While technologies to accomplish that are still very new, they also happen to be very promising, making it likely that 2018 will see significant strides forward in combining video, audio and touch into even better immersive experiences.