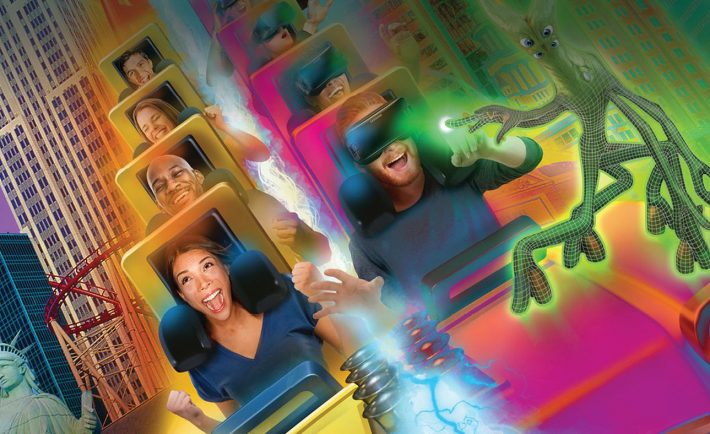 The New York-New York Hotel and Casino in Las Vegas has teamed up with German company VR Coaster to add a virtual reality experience to its Big Apple roller coaster starting Feb. 7. This development will make the 4,777-foot long Big Apple coaster the longest in the world to be equipped with VR.

For an extra $5 in ride fees, riders will be able to don wireless VR headsets once they board the coaster; the storyline will take them to an alien research facility in the Nevada desert where an extraterrestrial specimen has just escaped, and as the ride begins, so does a search for the alien escapee.

The VR experience leads riders to the Las Vegas Strip–the real-life location of the Big Apple roller coaster–where the 3D graphics are intended to synchronize exactly with the motion of the ride and the “real” view of the Strip at any moment, while also presenting an intense alien attack on the city. The LA Times describes the experience as “fairly accurate,” pointing out just a few omissions or misplacements of Vegas landmarks. The entire experience lasts 3 ½ minutes, presenting the VR footage in 4K resolution at 60 frames per second.

VR Coaster has designed such experiences for more than 30 rides around the world, including coasters at multiple Six Flags locations throughout the US and Mexico. The coaster cars are equipped with sensors that allow for synchronization of the VR visuals with all the drops, twists, and loops of the ride–good news for those prone to motion sickness.

In an interview with KDWN, co-founder and managing partner of VR Coaster Thomas Wagner said, “Our most exciting accomplishment with this experience was the fact that we had never before incorporated three completely different environments into a single ride,” referring to the research lab where the story begins, the desert outside the lab, and the Strip.

Riders who are hesitant about the new VR experience can still opt to ride the Big Apple the traditional way, sans headsets.