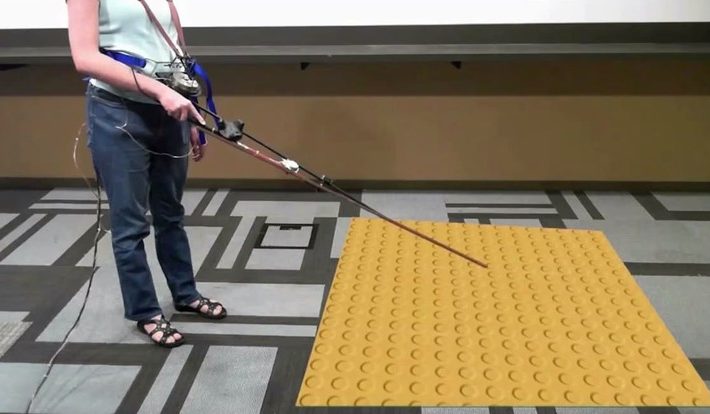 Researchers at Microsoft have developed a device they call the “canetroller”, a haptic VR controller that works with the HTC Vive headset and tracker to help people with visual impairments navigate virtual environments.

The canetroller consists of five parts: a cane controller that the user sweeps and taps as they would a regular cane, a brake mechanism to be worn around the waist, a slider placed between the controller and the break to impart the physical resistance generated by the brake, a voice coil that provides the controller with tactile feedback, and a tracker that monitors the controller’s position.

The actual controller is shorter than normal canes, so that it will not hit any objects in the person’s physical space. The remainder of the canetroller’s length is virtual. When it comes into contact with a virtual object, the canetroller generates vibrotactile and auditory feedback to simulate how tapping or sweeping over that object would feel and sound in reality. The braking system is activated when the cane hits an object while moving horizontally in the virtual world to stop it as a physical barrier would.

For ergonomic reasons, the braking system does not respond to this type of contact in the other two dimensions–when moving up-down or forward-backward–meaning that the canetroller can still penetrate virtual objects. The canetroller thus generates a beeping sound if it has pushed into an object too deeply as a temporary fix while the technology is further developed.

The research team recruited nine visually impaired cane-users to evaluate the canetroller in indoor and outdoor virtual environments. Object location went smoother in the indoor environment. The researchers noted that most of the study participants liked the vibrotactile feedback; the auditory feedback, while helpful, did pose difficulties for some individuals when it came to distinguishing between objects using sound information.

When asked about potential applications of the technology, the participants suggested mobility training, as well as previewing real-world locations before actually entering them. Others expressed excitement about inclusivity in VR. One participant mentioned enjoying “getting to participate in something … that sighted people get to do.”