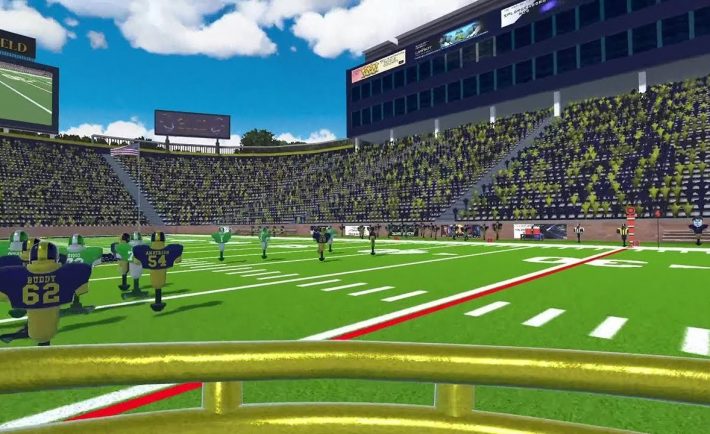 Virtual reality has far from hit the mainstream but you can’t help but get excited about it hitting the mass market.

For sports gaming it’s going to be a game changer, pardon the expression, and will further help millions of adults live out their childhood dreams.

Super Bowl – check. World Cup Final – check. The possibilities are endless. If course, some sports will be more suited to VR than others. We aren’t anticipating a swimming VR game or app anytime soon.

However, we’re crossing our fingers to see on the shelves over the next few years…

There have been a few NFL virtual reality examples already and it looks like the sport will lend itself well to the technology.

It’s a chance to replicate the view and journey of Tom Brady, with the QB position ideally suited to VR.

We expect the NFL will be one of the first major sports games to hit the mainstream in terms of VR and become an established fixture.

The likes of the FIFA franchise have already looked at point-of-view gameplay and VR will only enhance that.

It would revolutionise the genre after a few years of little change and give the chance to millions to walk out on that hallowed Wembley turf, albeit from the comfort of their living room. The feeling of playing soccer in real life has become so popular, online gaming community has embraced it by incorporating even in the gambling world in different slot machine games and soccer related apps like the bet365 mobile app.

The one thing that’s perhaps lacking from online gaming is the tension of actually being sat around the poker table.

Gaming apps are already making gaming more real life than ever before, offering as many games as you’d get in the Las Vegas casinos!

Virtual reality would be another step in making that experience even more lifelike.

Imagine being transformed to a high-roller table in the Bellagio in Las Vegas without having to board a plane. It certainly makes playing poker seem all that more appealing, doesn’t it?

There are few horse racing games of any quality on the market but virtual reality would lend itself staggeringly well to the sport.

The chance to live your life as a jockey will offer plenty of thrills, while seeing the action from their point of view will give a huge insight into the danger and bravery riders actually have.

Driving games already have a huge amount of accessories going for them and hooking those up to VR will pretty much place you on the starting grid.

It’s a sport that most developers will be looking into, although Codemasters has revealed they’re holding back on that front.

It’s a VR game that everyone wants though and we’d be amazed if it wasn’t one of the first games to hit the mass market.