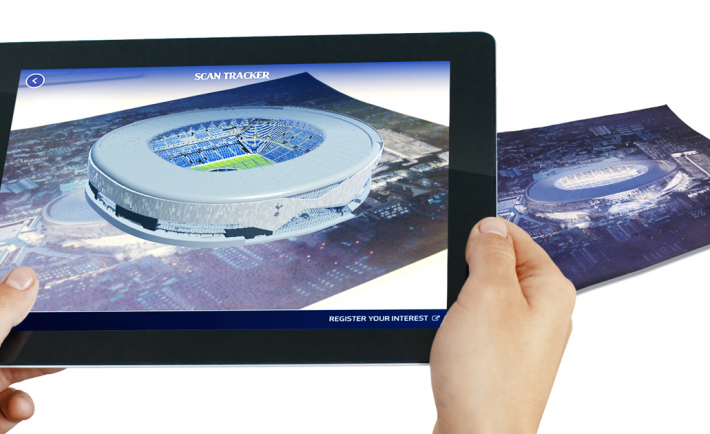 Just a few short years ago, virtual reality was seen as such a complex, advanced technology that a VR headset was viewed as a tool of the distant future, almost like a prop from a science-fiction movie. Fast-forward to today and VR is impacting every industry around the globe, from gaming and entertainment to marketing, hospitality and healthcare and – believe it or not – even professional sports.

Over in England at Premier League Association Football Club Tottenham Hotspur, a new Virtual and Augmented Reality technology is taking fans inside the club’s new state of the art stadium before it is even built. The ‘SPVRS’ App – titled after the club’s nickname Spurs – is available for free for users to download on iOS and Android devices and since May of last year has been bringing their new 61,000-seater venue to life.

The app provides access to a printable tracker image which is then brought to life by a user’s smartphone or tablet using AR, giving users the impression that they have been transported to the centre of the pitch.  From that point, users are absorbed in VR which allows a full 360-degree view of the inside of the new stadium. In terms of fan interaction with the club’s brand, it’s an ingenious marketing strategy that could be adopted by a number of other sports teams on both sides of the pond, and across the world.

In addition to being host to Tottenham’s home games in the Premier League, the new White Hart Lane stadium will also stage other marquee events, such as the NFL’s London games that have traditionally been held at Wembley, as well as concerts and world championship fight nights.  Tottenham’s ambition off the field is matched by their progress on it; they have come a long way in a short time under current manager Mauricio Pochettino and look to mount a title challenge this season.

Spurs are currently 4th in the Premier League and at long odds of around 40/1 with no deposit free bet sites to win the title due to their points deficit to favourites Manchester City. Tottenham are an optimistic 4/5 with bookmakers 888sport to qualify for next season’s Champions League which Man city are favourites to win at even money with the same bookie.

VR and sports fanatics are understandably excited at the boundless potential of the technology, which in the near future should give you the ability to wear a headset and feel like you’re pitch-side from the comfort of your own home.  As demonstrated by Tottenham Hotspur, sport and technology go hand-in-hand in the modern age and that relationship is only going to become more symbiotic.