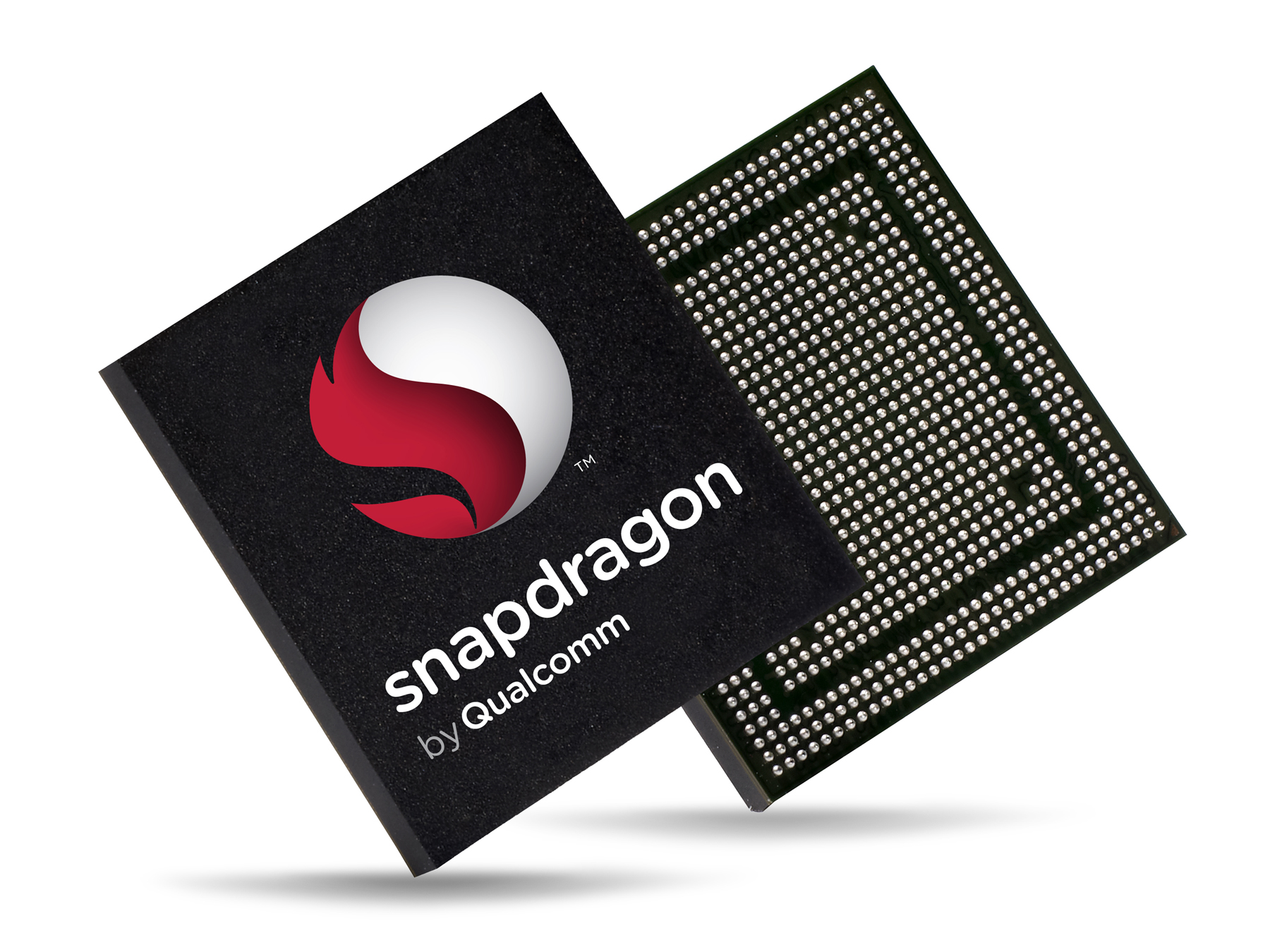 Qualcomm has been fairly quiet about their high-end ambitions after what is expected to follow the soon-to-launch Snapdragon 805 chipset. The Snapdragon 805 is Qualcomm’s chip that will likely ship in devices next quarter and is marketed by Qualcomm as their 4K chip with the Adreno 420 GPU.

Now, even though the Snapdragon 805 (APQ8084) is a very powerful chip, it lacks 64-bit capability and doesn’t have an integrated modem, requiring a separate modem like Qualcomm’s 20nm MDM9x35 to enable cellular capability. It also sports an improved Krait CPU with a Krait 450 CPU compared to the Snapdragon 801 and 800’s Krait 400. However, it still doesn’t quite satisfy Qualcomm’s need for a very powerful chip that looks into the future. The Snapdragon 805 is the chip for now. 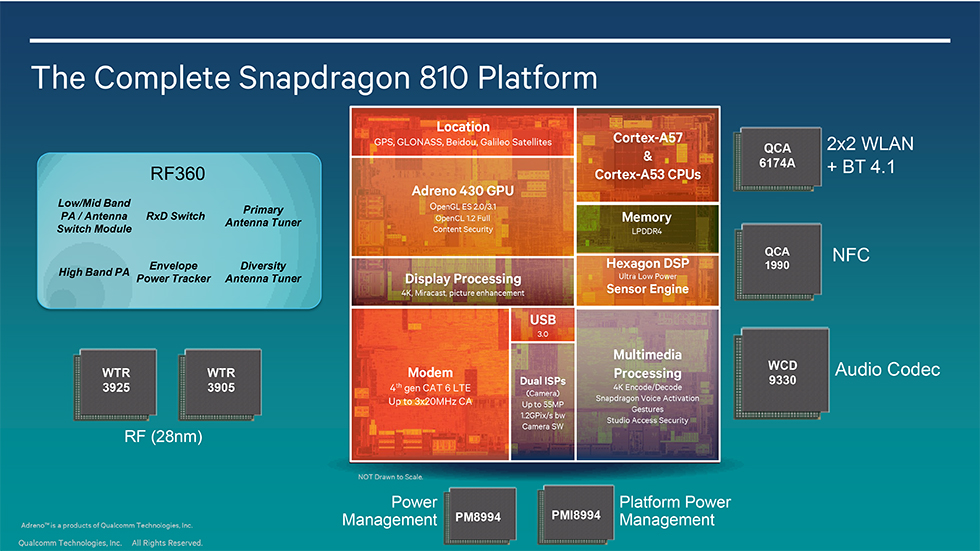 To me, and many others, it seemed like Qualcomm was poo pooing what Samsung and others were doing, and now they’re effectively doing the same with these two chips’ CPU cores. However, Qualcomm explained that they were reacting to market demand for 64-bit capable chips and that they wanted to deliver them to their customers as requested. They said that because their own custom 64-bit ARM CPU cores weren’t necessarily timed for what the market has demanded, they have adjusted and are delivering a 64-bit solution as quickly and effectively as they can with ARM’s cores. This can all be traced back to Apple’s release of the A7 64-bit chip in the iPhone 5S and how much they fundamentally shook the foundations of the mobile SoC world and what people were demanding.

In addition to the 64-bit ARM A57 and A53 cores, Qualcomm is integrating their modem directly into the SoC’s die, bringing the SoC and modem into one chip once again. Because they are integrating their 20nm MDM9x35 chip, they already know what they can expect to see from the modem side of things in terms of performance and power savings. Additionally, because Qualcomm has been working on 20nm with their modem, they could proof and tweak the process in anticipation for these Snapdragon chips. Because they both share the same modem, they will both be capable of Cat 6 LTE enabling LTE Advanced features globally with a single design. When paired with Qualcomm’s RF360 front-end solution, both chips will be capable of 3×20 MHz Carrier Aggregation, resulting in up to 300 Mbps download speeds in various spectrum scenarios.

The Snapdragon 810 will also be one of Qualcomm’s 4K-focused chips with the introduction of a 4K HEVC hardware video encoder as well as a 14-bit dual ISP (image signal processor) capable of 1.2 GP/s and supporting image sensors up to 55 MP. And because Qualcomm wants to focus on 4K so heavily with the Snapdragon 810, they once again bumped the GPU to an Adreno 430 which should bring 30% faster graphics performance when compared to the Adreno 420 in the Snapdragon 805. They also took a very serious look at the GPGPU compute capability of the Adreno chip and improved it by 100% all while reducing power consumption by 20% when compared to its predecessor. The Adreno 430 will also support OpenGL ES 3.1 which was recently announced as a standard, even though I suspect many of their currently available OpenGL ES 3.0 capable hardware could be updated to 3.1 via driver update as well. In addition to OpenGL ES 3.1 support, the Adreno 430 will also support hardware tessellation, geometry shaders and programmable blending. The Snapdragon 810 also will be Qualcomm’s first SoC to support LPDDR4 memory which means better performance and lower power consumption for high-end devices utilizing this SoC. 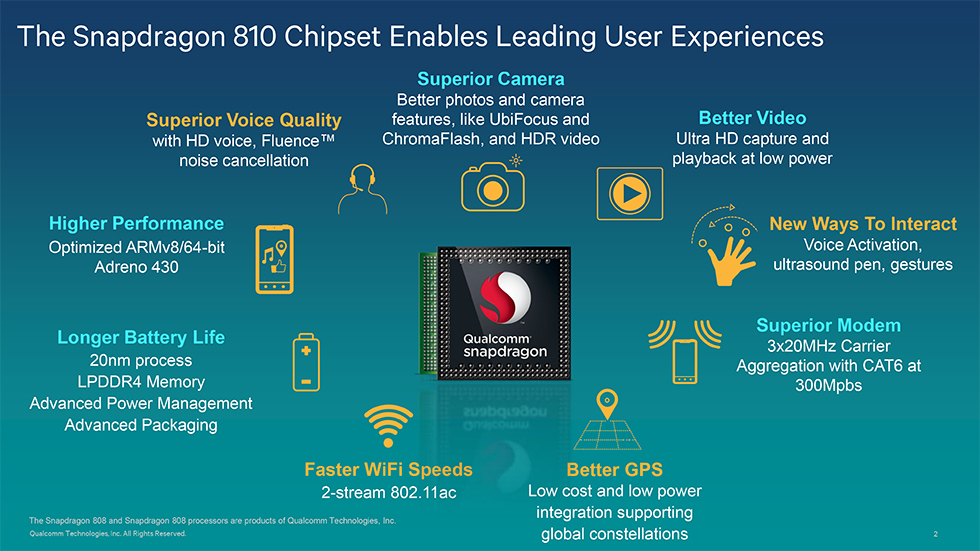 One of my biggest complaints about many SoC vendors as they’ve started to try to attach themselves to 4K is the fact that none of these GPUs, no matter how powerful, are capable of 3D graphics in 4K. The amount of horsepower it takes to do 3d graphics in 4K is absolutely insane and is far outside of the realm of these mobile SoCs, for now. As such, we were given clarification that most gaming in 4K on these devices will be done at 1080P and upscaled to 4K on whatever display it’s being played on. So, whenever you hear 4K gaming being mentioned, that’s likely what you are going to be seeing, even though its really 1080P gaming being upscaled to 4K. After all, almost all of the mobile games are built for 720P or 1080P and not anything much higher.

The Snapdragon 808 takes more of a focus on future smartphone resolutions with a targeted design for WQXGA resolution of 2560×1600 (close to the Oppo Find 7) even though that phone has a 2560×1440 resolution, it’s essentially the same resolution. It does, however, have an Adreno 418 GPU, which actually puts it below the Adreno 420 and Adreno 430 which are both targeted towards 4K resolutions. The Adreno 418 claims to deliver 20% faster 3d graphics than the Adreno 330 in the Snapdragon 800, giving a slight performance boost to smartphones even though they’ll be handling much higher resolutions. In fact, the 2560×1600 resolution is double the pixels of the current 1920×1080 on most smartphones, which in my eyes, should justify more than a 20% improvement over the current generation. The doubling of pixels is especially important when you consider exactly when this SoC is expected to be shipping in devices.

Now, if you take into account the Snapdragon 810 platform as a whole, you would be looking at an 8-chip solution, assuming that you were to go with Qualcomm’s RF360 RF front-end (WTR 3925 and WTR 3905) as well as their PMICs (power management integrated circuits) and their 2×2 WLAN chip (QCA6174A) that enables 802.11ac and MU-MIMO. They also have an NFC chip (QCA1990) and an audio codec that round out their full Snapdragon 810 platform, which is if you want to go Qualcomm the whole way.

Based on what I see here, I would say that the Snapdragon 810 will likely be a pretty attractive part for many looking to win the spec wars against their competitors and that we’ll probably see it used in both phones and tablets. I say this primarily because of the fact that even though the Snapdragon 808 is a slightly dialed down version of the 810, I’m simply not convinced that it will be powerful enough to deliver a smooth experience at 2560×1600 and to enable what I’d expect to be upscaled gaming (in the short term). The Snapdragon 810 really looks to be a great part, but it will be interesting to see where it will fit in their stack once Qualcomm eventually shows off their own custom 64-bit CPU cores, the successor to Krait. Judging by Qualcomm’s own marketing they really seem to be focusing on the Snapdragon 810, and I can totally see why. I think we will see more devices launching with the 810 than we will with the 808, even though the 808 will be in a more affordable price range. A flagship chip is a for flagship devices and manufacturers want to make sure they are putting in the best possible at that time.