Back in 2003, AMD introduced the Opteron processor, world’s first 64-bit x86 processor capable of addressing more than 4GB of memory (32-bit) – no less than massive 1TB of memory, courtesy of its 40-bit allocation table. Processors of today are capable of addressing up to 8TB of SDRAM memory thanks to extended (46-bit) allocation table. However, until now, finding a high-capacity memory module with 32GB density was as rare as finding hen’s teeth and usually you would pay top dollar for it.

Upcoming 20nm manufacturing process enabled the creation of ultra-dense memory modules and with SK.Hynix launching its 20nm 8Gbit memory chip, there was no doubt something special was in the works. 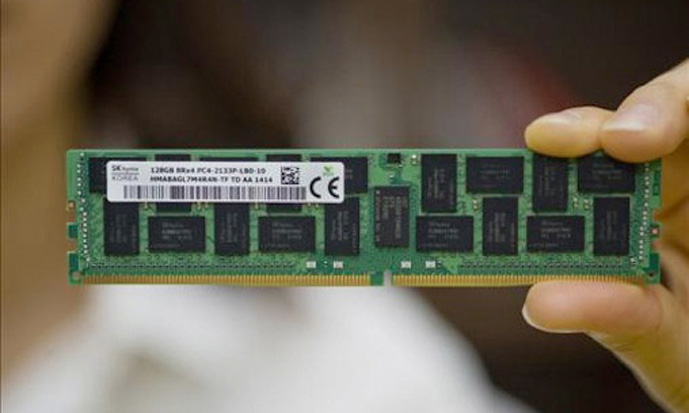 For SK.Hynix, the end result is world’s first 128GB memory module, designed for the new DDR4 memory standard. While there is no way that this memory would become a mainstream part (at 20nm node), it shows that the DRAM industry is ready to offer something special for the upcoming server processors from Intel and AMD. This memory module also makes the first time TSV (Through Silicon Via) technology was used, utilizing vertical DRAM silicon stacking, e.g. 3D chips (not transistors).

If a typical server CPU comes with eight DIMM slots, with this module you will be able to pair each processor with 1TB of DDR4-2133 memory, resulting in 68GB/s of available bandwidth. While this is ways away from a high-end desktop / workstation usage, the existence of 128GB module will drive the price of 8GB, 16GB and 32GB modules down, with 64GB modules expected to drop down in price by over a half.

There’s also a matter of the way how DDR4 works, reducing the voltage from 1.35V or even 1.5V (initial DDR3 modules) to 1.2V. The current (A) did go up, so do not expect great power savings coming from the memory side of things, but the sheer capacity should make up for it.

We expect this memory in working demo systems at the upcoming ISC’14 supercomputing conference (June 22-26), which takes place in Leipzig, Germany.