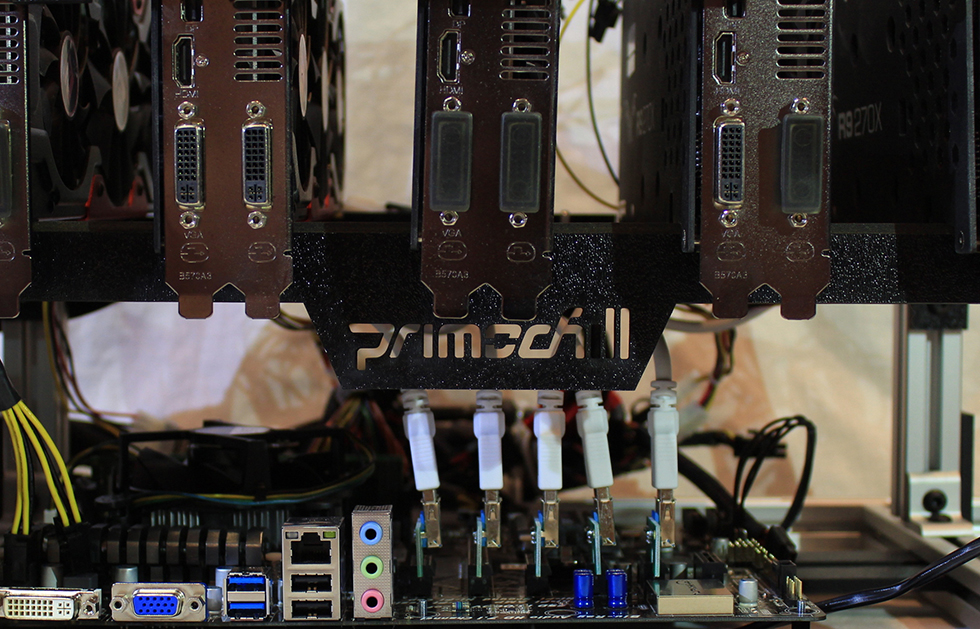 Not too long ago I received a message from a friend, linking to a mining rig/case on FrozenCPU. I took a quick look at it and thought that it was just what I had been waiting for. Over the last year I have gotten into alternative currency mining. During that time I have assembled a few rigs. For housing the multiple gpu rigs I had jerry-rigged them on wire shelving. The kind of wire shelving that you can find at Target or Wal-Mart for less than $50. This has been working out nicely for me up to now. I am trying to redo my office and keep it nice and tidy, so the racks have to go. They sure take up a lot of room, not to mention being an eye sore in my office. I decided that the Hasher could be just the ticket, as it looked to be an organized and stackable unit. So I placed my pre-order for two PrimoChill Hasher units.

I will taking a closer look at the Hasher, PrimoChill’s new mining rack offering. I am evaluating the Hasher based on the reasons you would upgrade to one: ease of use, looks, assembly, and quality.

The Hasher is currently priced at $129.99 and is available from FrozenCPU.com. The unit was delivered in a plain brown box with the small parts in baggies, and the larger parts plastic wrapped together. There was very noticeable odor coming from the parts which was likely caused from the laser
cutting of the plastic pieces. I have had surgery on my sinuses and it bothered them greatly, but others I have talked to were not too affected by the smell.

The assembly is fairly easy but does take a bit of time to complete. One of the first things I noticed was there were no paper instructions for the unit. Surprisingly there was only a small piece of paper with the PrimoChill product page for the Hasher. There they have a YouTube video with instructions to build it, which was a nice idea but flawed. Seeing as I was building the unit in my living room I only had my phone on me, I relied on that to watch the video. This wouldn’t be so bad if the screws that they provide to build the Hasher were not covered in oil. As I was pausing and rewinding the video to watch the next steps I was getting more and more oil on my phone. This was a real frustration as even when I toweled the screws down they were still quite oily. That was the only major flaw I found in the assembly of the item. I was informed that PrimoChill now has a PDF file for building reference PrimoChill provided a nice Allen wrench that you can assemble the whole thing with. You will only need a small flat head screwdriver to attach wires to the power and reset buttons. Everything just slides into place nicely andit comes out looking very sharp. 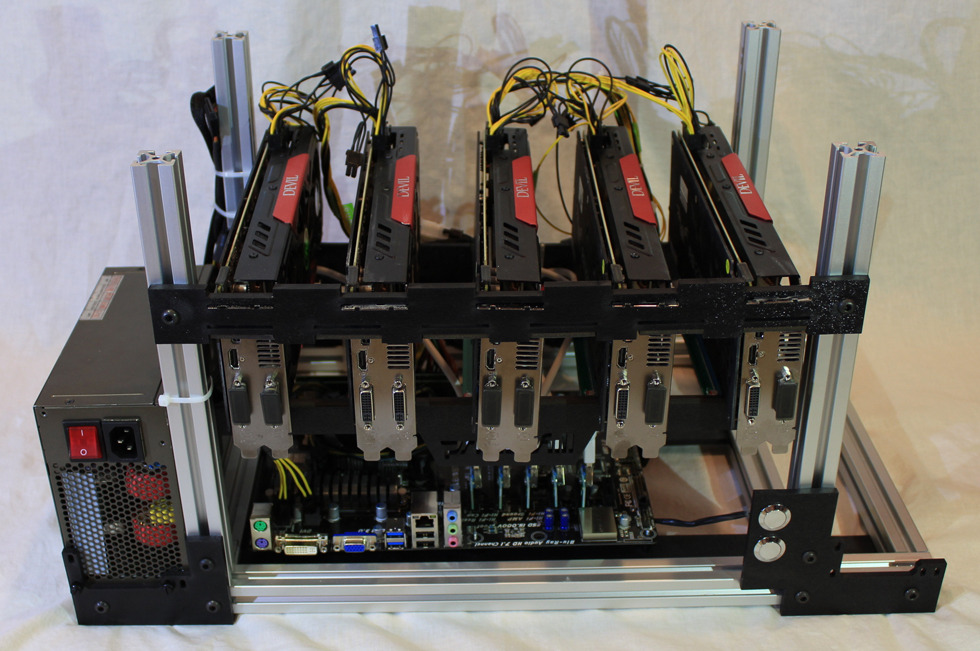 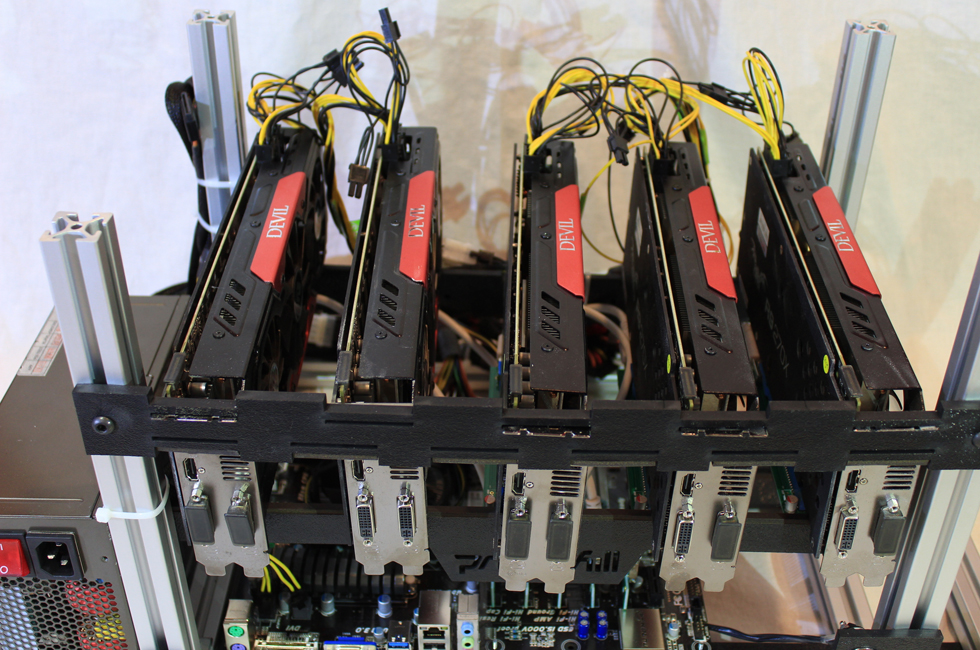 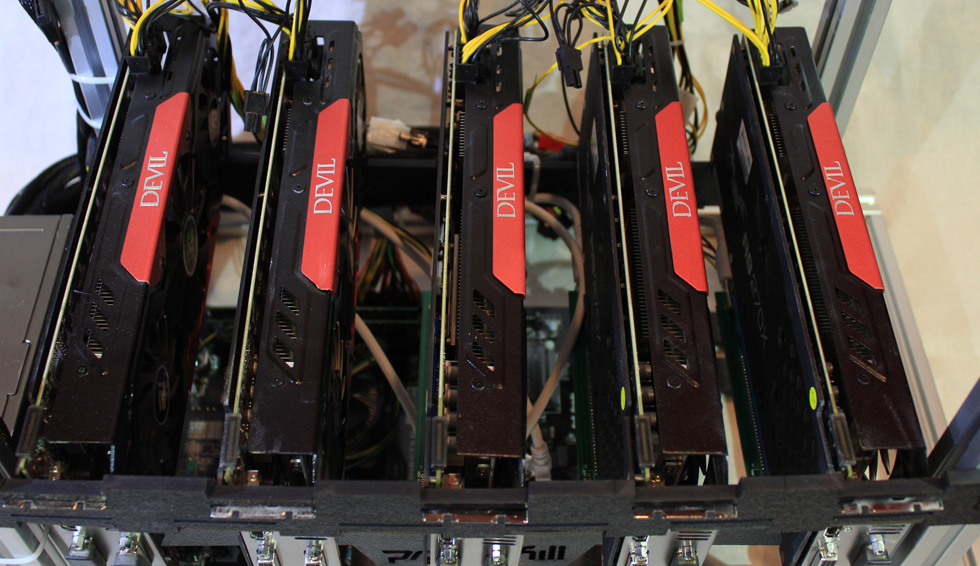 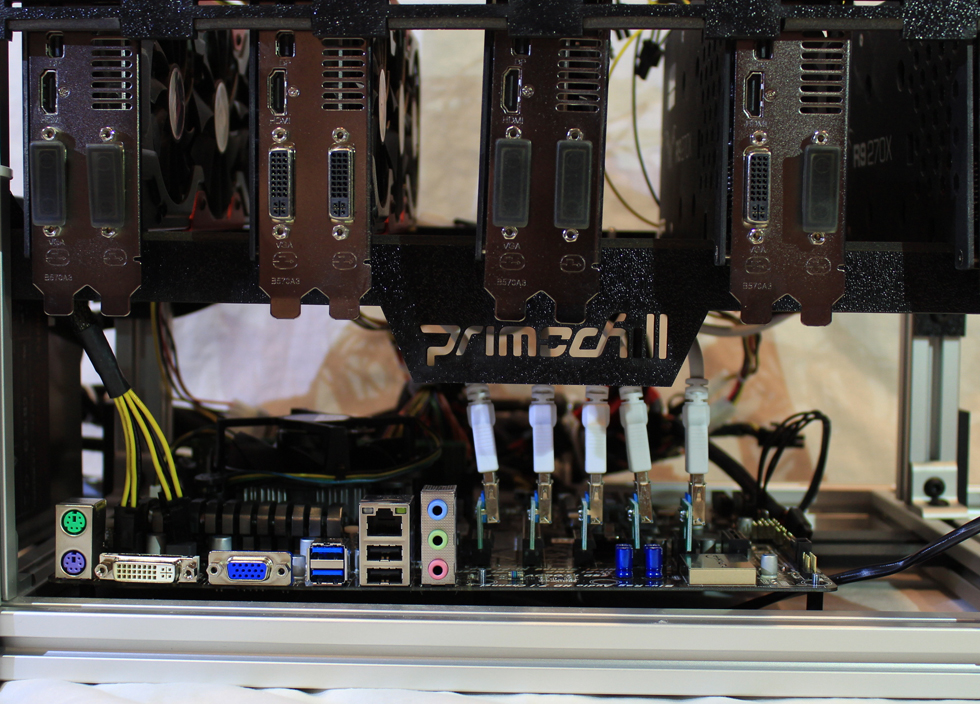 The Hasher allows for dual PSUs and comes with a harness to hook them up. It makes it so much easier by not having to jump one with a bit of wire. 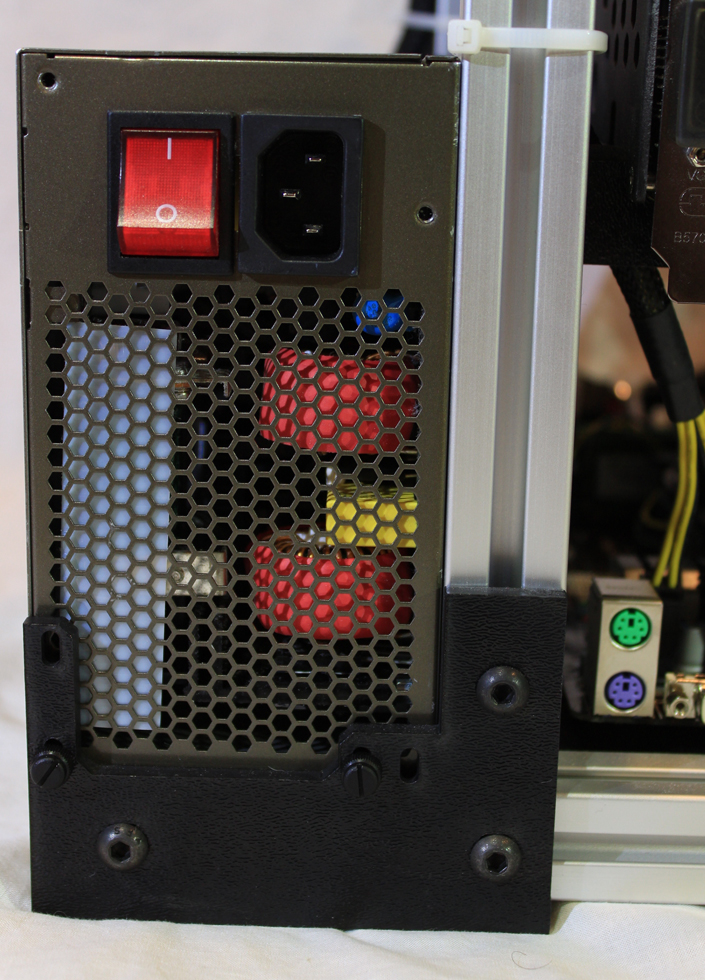 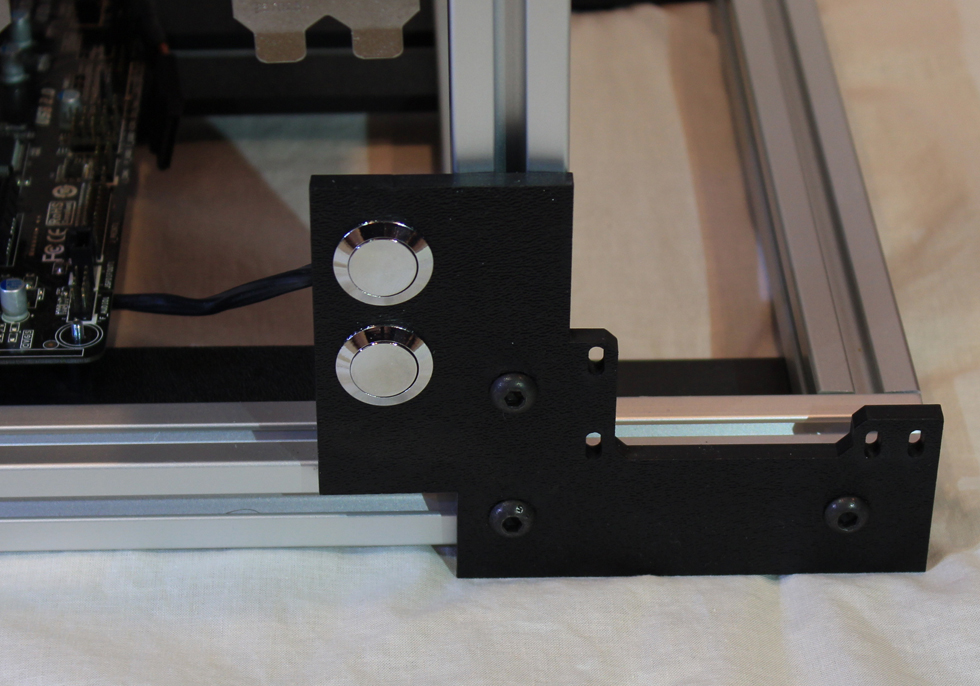 The buttons are good quality and really make the Hasher look nice and clean. 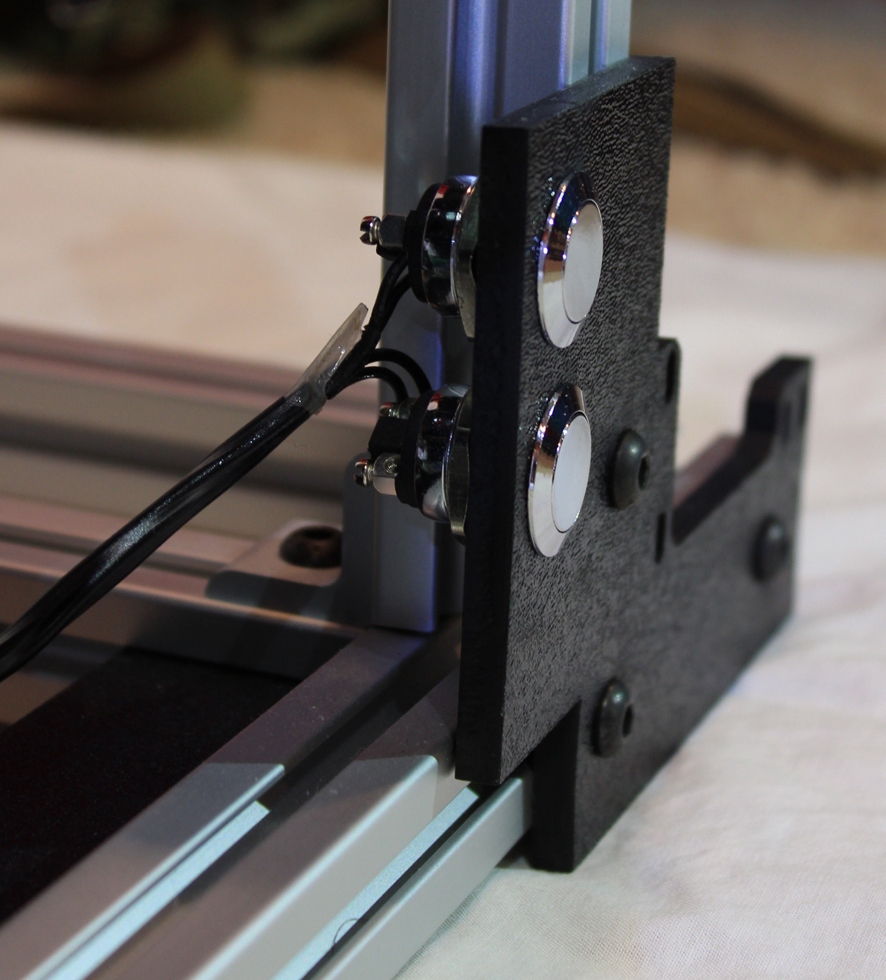 The motherboard “tray” is just a few strips of plastic with standoffs that float in the channel of the frame. 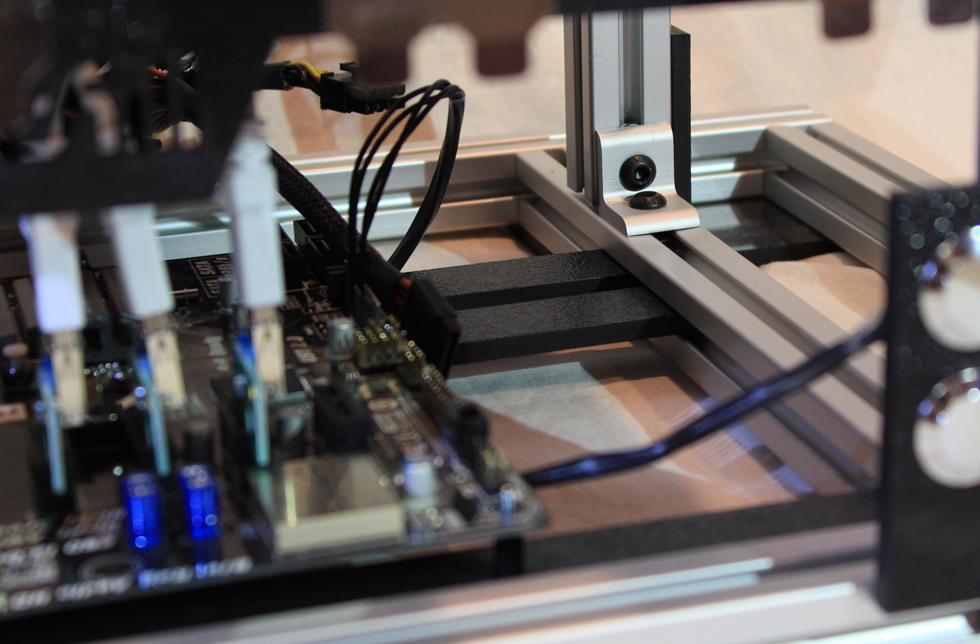 There are spacing options for five or six cards, and there seems to be a few different ways that you can choose to secure them in front. I went with the front two supports locking them in and the rear strip holding the ends up. I recommend using a ruler to set the height of the bars on each side so you keep it even. 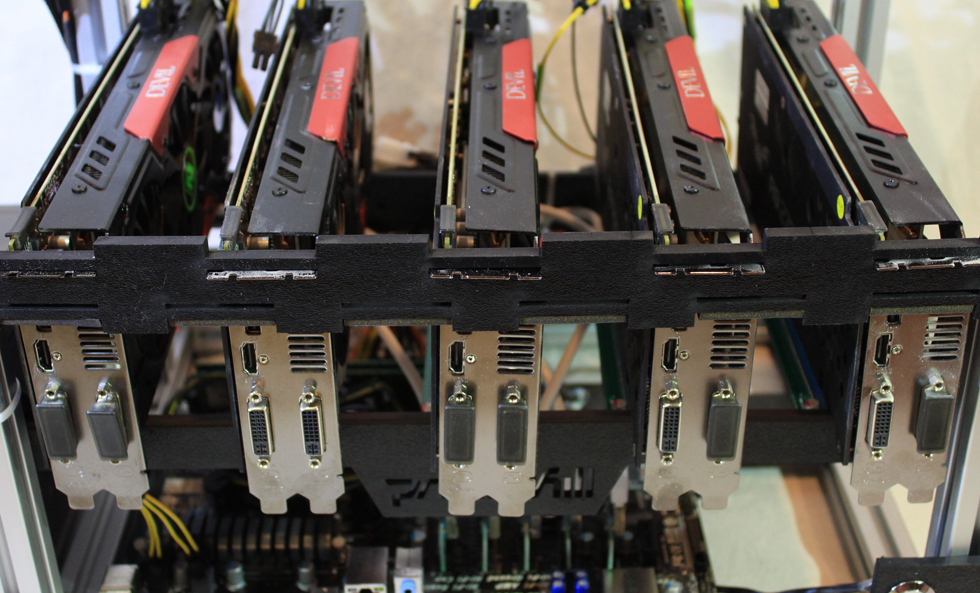 PrimoChill offers cooling upgrade options. There are fan brackets and a ducted exhaust box that mount to the Hasher. These add-ons keep the same pleasing aesthetics as the Hasher. These will definitely be of use to provide a constant supply of fresh air when running multiple graphics cards.

The Hasher is built with quality parts and looks great which is nice since I will be keeping this in my office. The fact that I can stack two or more on top of each other is another big bonus to save as much space in my office as I can. I think that with this item the biggest drawback is its price which at $129.99 is a lot more than $30-$50 wire shelving that many miners use to store multiple rigs on. If you are looking to have the highest return on your investment on the hardware this is not for you. This is a great option for being able to have a mining rig that is well organized, stackable, and something that looks great.. After I moved from a wire rack to the Hasher I am quite happy with it. So at the end of the day this does exactly what it promised, with minor inconveniences in the assembly (and for me smell). I won’t hesitate to recommend this product to someone who wants a cleaner setup over the wire rack.