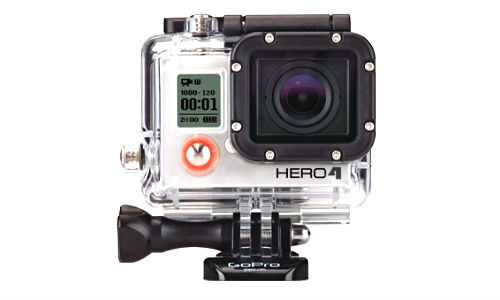 As many of you have probably been anticipating, GoPro’s Hero 4 is the much awaited update to the already wildly popular GoPro action camera that so many people already coveyt. The current iteration, the GoPro Hero3+ was what many expected could or should be the GoPro Hero4 solved many of the problems that the GoPro Hero3 had, however, it didn’t really improve the overall resolution or framerate of the camera. According to DGISE the new GoPro Hero4 will be released this summer using the already well-known Ambarella SoC that’s already been capable of 4K video encode and decode for quite some time.

However, a lot of people were pretty disappointed with the improvements of the Hero3+ over the Hero3 because it felt like such a long time without any significant improvements. But then, in February we got our answer. GoPro announced that they would be going public as a company and filed for an IPO which ultimately meant that the company would launch the new camera after their IPO in order to ensure a good boost of the shareprice and the company’s value. There’s no doubt that once GoPro releases this camera it will be able to do 4K and will probably do it for about $400 which would make it the cheapest 4K camera, ever, and probably for a long time. This clear technology advantage would likely mean that a lot of people with older GoPros would probably upgrade to the new GoPro and they would also win over a lot of new customers as well, with this new 4K featureset and incredibly reasonable price. Even the cheapest smartphone that can record 4K will cost you $600-$700.

According to the rumor, the new Hero4 will be able to do 13 megapixel stills in addition to the 4K video at 30 FPS, the current holy grail for any camera system hoping to achieve the highest level of quality right now. In addition to that, it is rumored to be capable of 1080P at 120 FPS and 720P at 240 FPS, which means that even if you don’t think you want or need the 4K feature, you can still get some impressive slow motion video capture at 1080P. The camera will also have the ability to capture stills while recording video, which is a great feature for anyone looking to pull stills from a very well shot video.

There is no specific price set for this camera, but I’d expect it to be around $399 with all the bells and whistles and that it would launch shortly after GoPro’s IPO becomes a reality. So, simply watching GoPro’s business should indicate to us when we can see the Hero4. Sure, its risky to do things this way, but I just don’t see them rationally waiting this long to do a Hero4 with 4K video playback and launch it BEFORE their IPO. It just doesn’t make any sense to anyone that knows how well these guys have done for themselves with this camera system. I would also expect to see some new features in the Hero4’s software that will focus on GoPro’s focus on media creation and not just selling hardware to consumes and extreme sports enthusiasts.