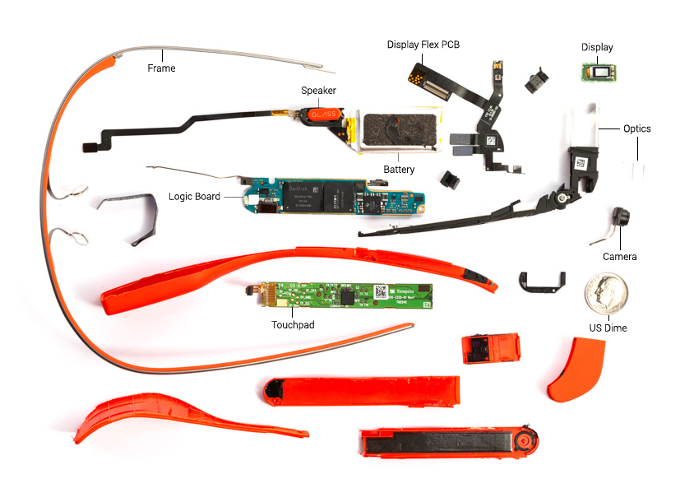 According to the guys at Teardown.com the very hot Google Glass wearable computer from Google only carries a bill of materials of $80, which is about of of what we were expecting. It doesn’t really come as much of a surprise though, because Google Glass itself is incredibly old technology in terms of mobile and wearables and it really doesn’t provide much technological innovation. In fact, most people will be shocked to know that the SoC powering the Google Glass is in fact the same SoC that powers the failed Blackberry Playbook which was released more than 3 years ago with the same SoC. At the time of the Google Glass’ release, about a year ago, it was already running on 2 year old technology and was still being billed by the company as bleeding edge tech. The real truth of the matter is that Google Glass is being promoted as bleeding-edge when in reality we’re being sold technology that is at least 2-3 years old, which would be absolutely unforgivable in the smartphone industry. Imagine if someone tried to sell you a Blackberry Playbook for the same price as an iPad Air and convince to you pay way more on top of it.

Sure, there was some research and development involved with the creation of the Google Glass, and the reality is that it doesn’t really have any comparable competitors. That’s why Google is able to effectively charge $1,500 for a device they could sell for $320 and still make a hefty profit. The software on the Google Glass is really where Google has put in the most effort with the device considering that a lot of its design and hardware was designed by another firm and acquired by Foxconn and then subsequently acquired by Google from Foxconn. In fact, Google recently bought more communications patents from Foxconn, which may indicate that perhaps Google needs an even stronger mobile patent portfolio than they already have. Or, they didn’t get all of the patents they needed to make Google Glass go mainstream.

Either way, Google Glass is grossly overpriced and underperforms in almost every way, mainly because of the old hardware. The battery life isn’t too great, it gets pretty hot, it isn’t very responsive and on top of all that, it looks pretty damn ugly. And when it doesn’t look ugly, it looks douchey, which is almost worse. Google Glass has a long way to go, no doubt, but it definitely gets people excited about wearables and wearable computing and hopefully there will be more actually useful apps for it soon. Oh, and Google needs to do a REAL Google Glass 2.0 hardware revision, not the one that they did late last year where they got rid of bone induction sound and added some optics adjustments and prescription glasses. Google needs to properly update Google Glass with newer hardware that gets better performance while consuming less power, they have plenty of low-power choices and it will be interesting to see whom they pick for the new SoC, if they ever do update the damn thing.