Comcast is trying to lie to us, again. Comcast is continually changing their story about why they should be allowed to acquire Time Warner Cable, constantly looking for reasons why it won’t hamper competition or consumer choice. They look towards the fact that our mobile carriers are also our internet service providers and that they are technically competitors with Comcast. Even though, anyone that knows anything about how the mobile industry works knows that mobile industry growth and competition has almost no negative effects on landline based internet. In fact, in a lot of cases users with mobile data coverage end up getting landline service from ISPs like Comcast or Time Warner Cable because they have become so accustomed to having connectivity everywhere. Comcast is arguing that somehow they are in the same industry as our mobile carriers even though neither party’s success actually affect’s the other’s in any way. That would be like saying that Mack trucks is a competitor with Tesla because they both make vehicles, even though neither company has anything to do with another whatsoever.

Now that we’ve addressed that and Comcast’s BS, we wanted to talk about Comcast’s latest set of lies. This primarily has to go around the fact that they are talking about implementing data caps within the next 5 years, but are now saying that they won’t actually have data caps. How do you say? Well, with ‘unlimited’ internet of course! Except, this unlimited internet is actually exactly as it was called by the press. A data cap with an overage fee. You know something that we’ve been experiencing in the mobile industry. Except, in the mobile industry we have more competition and there are actually carriers you can switch to in most areas that actually offers real unlimited. With lanline internet service providers like Comcast, you are usually locked in to 1 or 2 ISPs and you are totally stuck. So, Comcast wants to increase their profitability and to enable themselves to copycat what the mobile carriers are doing. Cap your data and then charge you for overages, you know, overages on a wired connection where bandwidth is far less limited than on wireless connections.

This is all on top of the fact that Comcast is continually charging their users an outrageous amount of money for services if they don’t want to be hampered by Comcast’s network policies. How do you do that? You have to subscribe to their ‘business’ internet plans which are nothing more than unrestricted versions of the exact same internet service delivered to residential customers. An ARS editor is paying $133 a month for his 50/10 Mbps internet service through Comcast Business and that is quite literally double what I’m paying with Time Warner Cable for 55/5 Mbps. So you can imagine my excitement for Time Warner Cable to get acquired by Comcast, because Comcast says that they won’t raise prices on consumers but they also won’t lower them, which is also BS. They will just employ so many restrictions on the people that are paying for the same level of service that they will be forced to pay more (Comcast Business) in order to get rid of them. 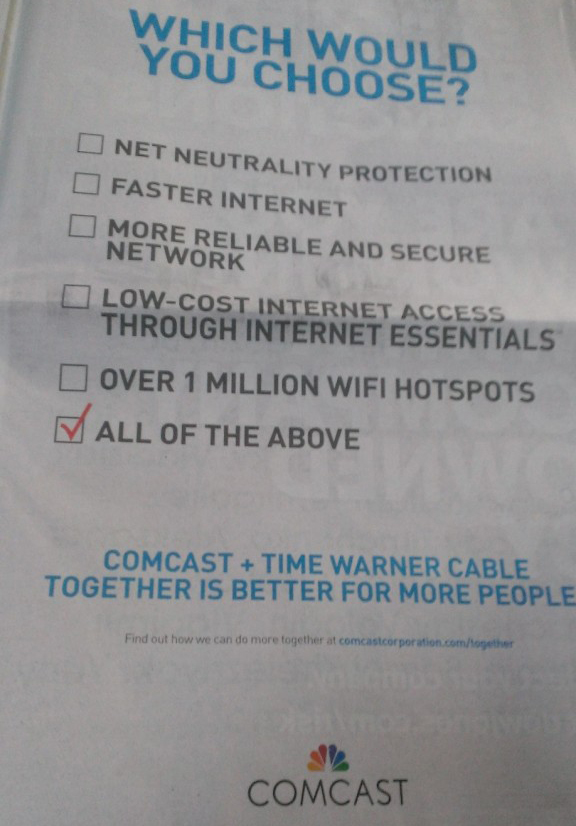 But wait, it gets better, Comcast is also trying to market themselves as protectors of Net Neutrality, even though they’re effectively the definition of anti-net neutrality with their fees that they charge Netflix in order to deliver a reasonable level of service to their customers. You know, paid prioritization, the fundamental thing that will ruin net neutrality? In a full page newspaper ad, Comcast tried to buoy support for their Time Warner Cable acquisition deal by promoting themselves as a check list of things that consumers would want. The list goes: Net Neutrality Protection (HA), Faster Internet (Faster how?), More Reliable and Secure Network (How is Comcast any more reliable or secure than Time Warner Cable?), Low Cost Internet Through Internet Essentials (only available to low-income consumers), Over 1 Million Wi-Fi Hotspots (who needs those anymore? do we live in 2004?) and last but not least “All of The Above.” I shit you not, they actually make consumers think that all of those things are going to be delivered by Comcast, at the same time. When in reality you can’t have faster internet speeds if you’re paying for the absolute minimum service (Internet Essentials) and that service is only available to low-income consumers and nobody else.

So, as you can tell, Comcast is full of lies and deceit and they will continue to push legislation and policies that are fundamentally anti-consumer, including the Time Warner Cable deal. Also, don’t forget that Comcast is the reason why the entire state of Pennsylvania (their home state) has a law that FORBIDS any sort of municipal broadband service, because you know, that would be competition.