Microsoft has announced that they will be expanding OneDrive capacities for free users as well as subscribers and extending 1TB of storage to Office 365 subscribers, adding even more value to their Office 365 product.

In terms of OneDrive upgrades, the first upgrade comes by the way of free storage which was previously 7 GB (was originally 25 GB when it was first launched as SkyDrive) and is now 15 GB. So, Microsoft giveth, then Microsoft taketh, and then Microsoft giveth once again. I guess Microsoft just assumes that people have incredibly short memories or something, but this isn’t really much news other than the fact that they’re now more competitive with Dropbox and Google Drive in terms of free space.

Microsoft is also dropping their paid storage options by nearly 70% with their 100 GB plan costing $2 a month and $4 a month for 200 GB. There are no other options available for more storage, unless you get an Office 365 subscription which includes office and the newly announced 1 TB of storage on OneDrive. So, really, with Office 365 you get more value than you ever did before because you’re getting something like $20 a month worth of OneDrive storage as well as Office, which is technically $10 a month on its own. So, really, if you want to have 1 TB of cloud storage you’d be better off with an Office 365 account than actually trying to pay for any OneDrive storage at all. 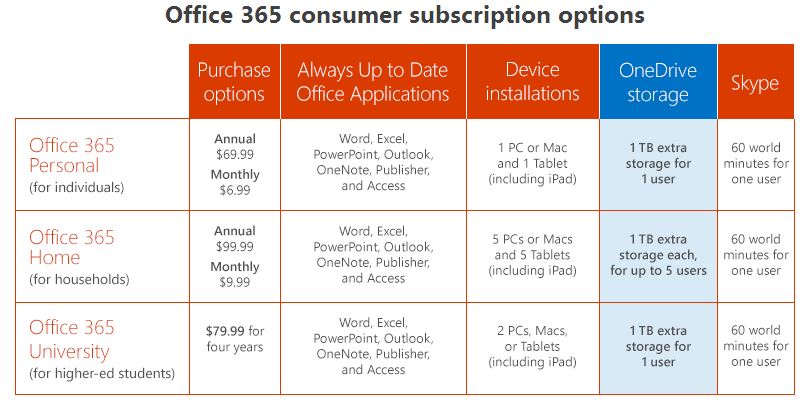 So, as you can see, even an Office 365 University account will be eligible for this 1TB extra storage (on top of the 15 GB free) which actually makes Office 365 and 1 TB of OneDrive storage cost something like less than $1 a month ($80/96 months).