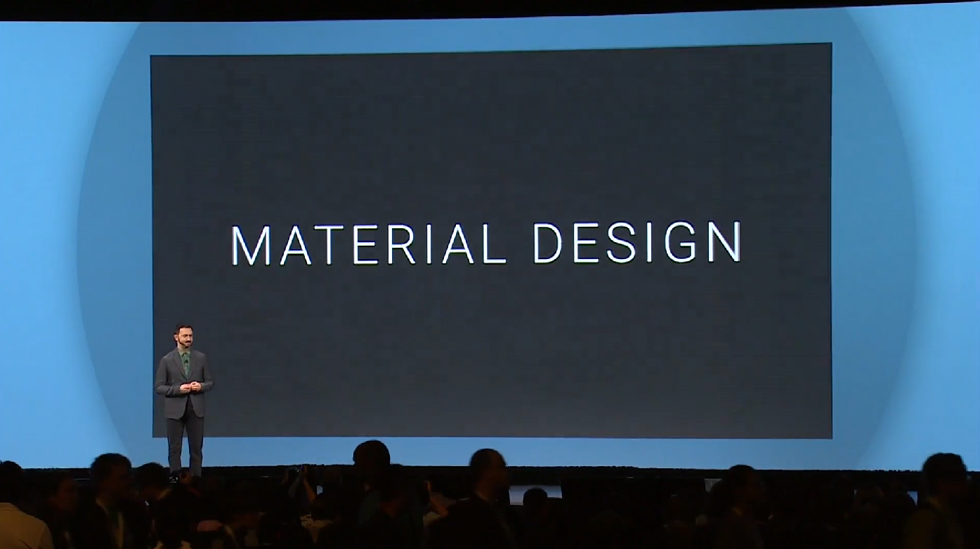 This year’s Google IO opening keynote was by far one of the longest keynotes I have ever watched by a single company, let alone a single presenter (2 1/2 hours long). This year’s announcement was squarely focused on the Android operating system and barely on any hardware at all. In fact, almost all of the hardware mentioned today at Google IO has already been announced in one way or another. So, unlike many were expecting, Google did not announce a new Nexus 6, Nexus 9 or any other Nexus devices. They talked about the Moto 360 and the LG G Watch but that was about it.

Most of Google’s focus at Google IO was around Android L and the surrounding design principals it brings to Android. Many people were expecting Google to give Android L a candy-themed nickname like Lollipop or Lemon Pie, but they’ve continually made it clear that they currently intend to call it the L-release. Perhaps Google is waiting for someone like Laffy Taffy or Lindor Truffles to cross-promote the next version of Android like they did with Kit Kat. 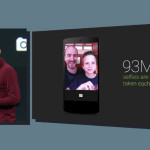 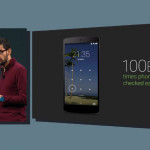 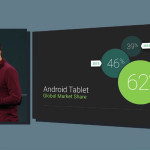 In addition to the stats about selfies and how often we check our phones, and Google’s Android tablet market share (not counting Kindle Fire and other Android forks) Google talked about their new version of Android called Android L Release (for lack of a better name). The L developer preview will have a lot of design and UI improvements as well as developer-focused improvements that will improve the ability to improve performance and battery life. 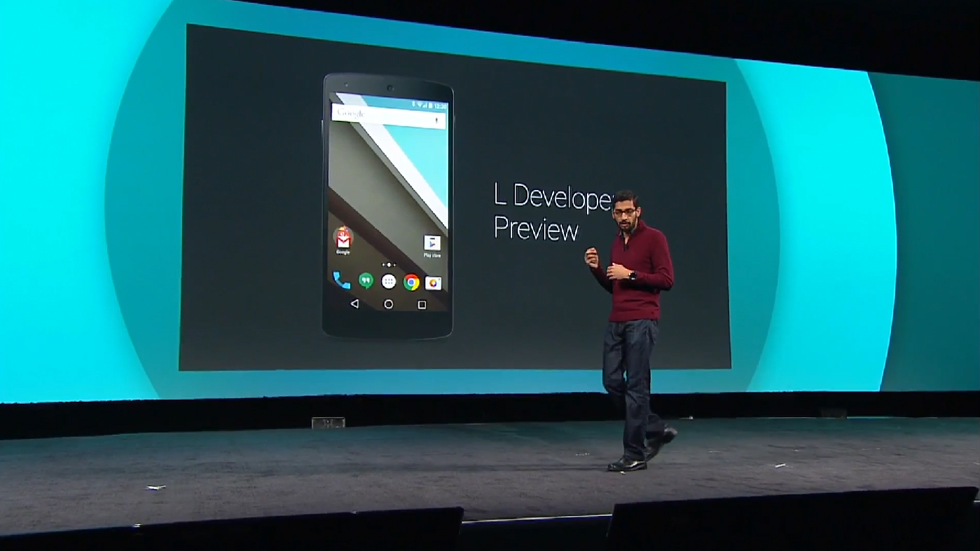 They are doing this through their Material Design principals that operate on the premise that you are interacting with real materials inside of the phone to make the overall experience feel more realistic. They are accomplishing this with multiple layers of the UI as well as shadows and animations that help simulate a more material UI. 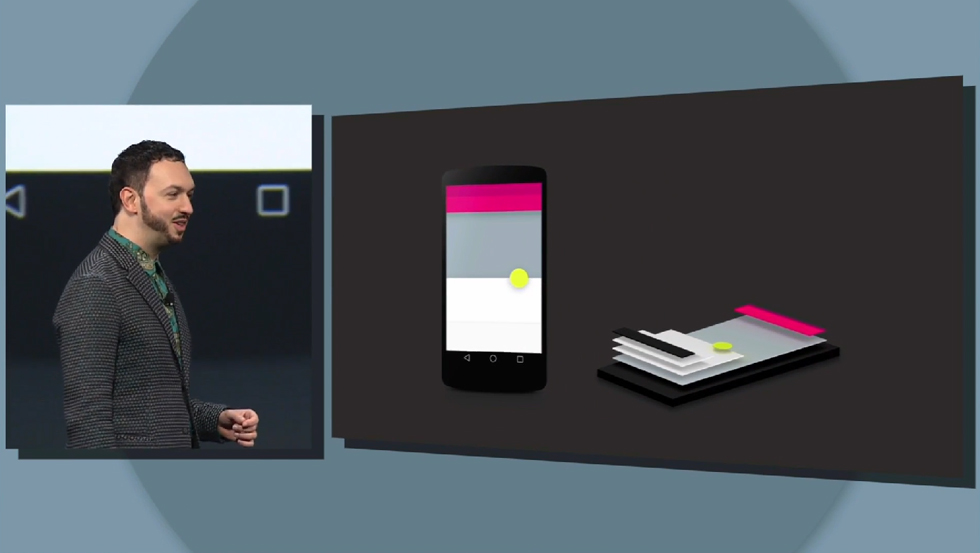 Google is also working on making Android more seamless between features like Google Now, Apps and Chrome so they’re employing the switching ability between different applications to make it more seamless and natural so that each part of the Android OS feels less isolated. You will also notice from the screen shots below and above that Google has decided to change the icons for the soft menu buttons to an arrow, circle and square. Simplifying the overall look of these buttons. 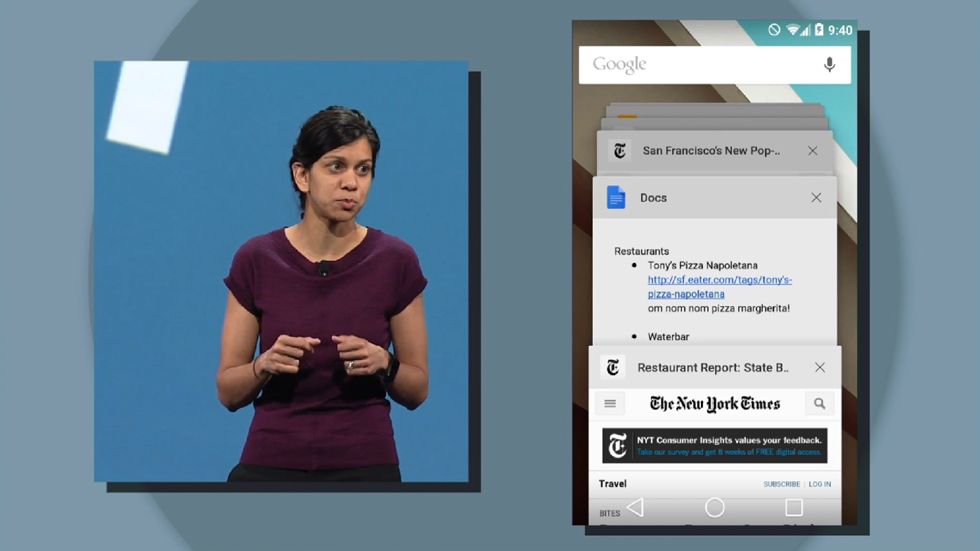 Google also made some pretty significant improvements to the phone’s dialer which includes making the buttons bigger again (one of the biggest complaints about the Kit Kat dialer) and they now have little droplets that animate when you press certain buttons so that you can see where you pressed and get a more ‘material’ feel. 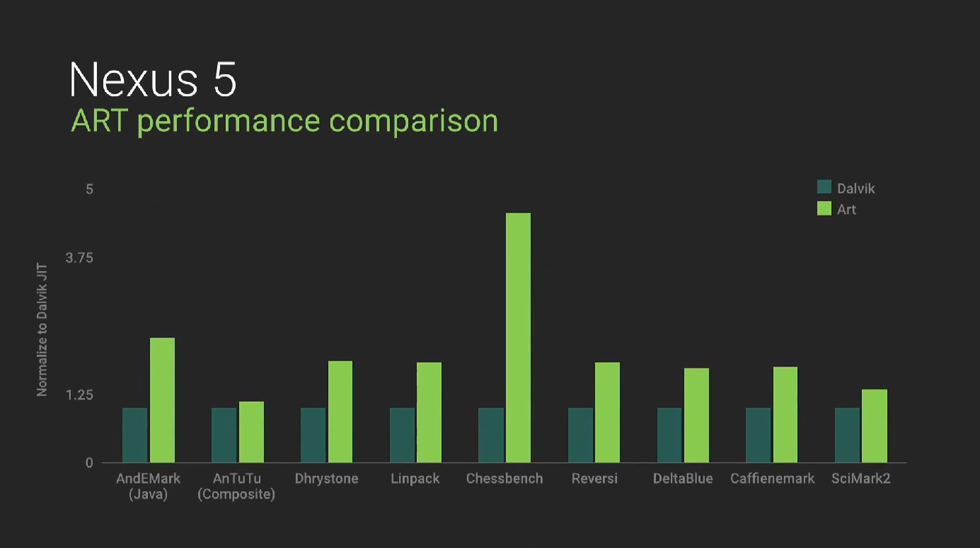 Also, as we had stated, Google is making Android L a 64-bit compatible and optimized operating system. By adding all of the 64-bit features like larger number registers and newer instruction sets they make 64-bit Android a much more standardized platform rather than one that has to be worked on by Google and their partners. Now that Nvidia and Intel already have 64-bit hardware it seems logical that Google would be pushing 64-bit now, especially since Apple already has the lead on them. The increased addressable memory space won’t likely see much of an improvement in memory capacities for most Android devices, but now if you want to build an Android desktop device you could absolutely do so with 8GB of RAM without worrying about OS limitations.

In fact, they even showed a demo on-stage running on Nvidia’s latest Tegra K1 SoC with Android L and 64-bit, meaning that it is Nvidia’s 64-bit Tegra K1 chip with their own custom ARM cores. Something that their biggest competitor, Qualcomm still has yet to do as their Snapdragon 808 and 810 chips won’t be out until 2015. There’s a very good chance we could see 64-bit Tegra K1 devices by the end of the year, but that is completely unsubstantiated by anything other than the prevalence of Nvidia’s 64-bit K1 being mentioned so many times by companies that are not Nvidia. 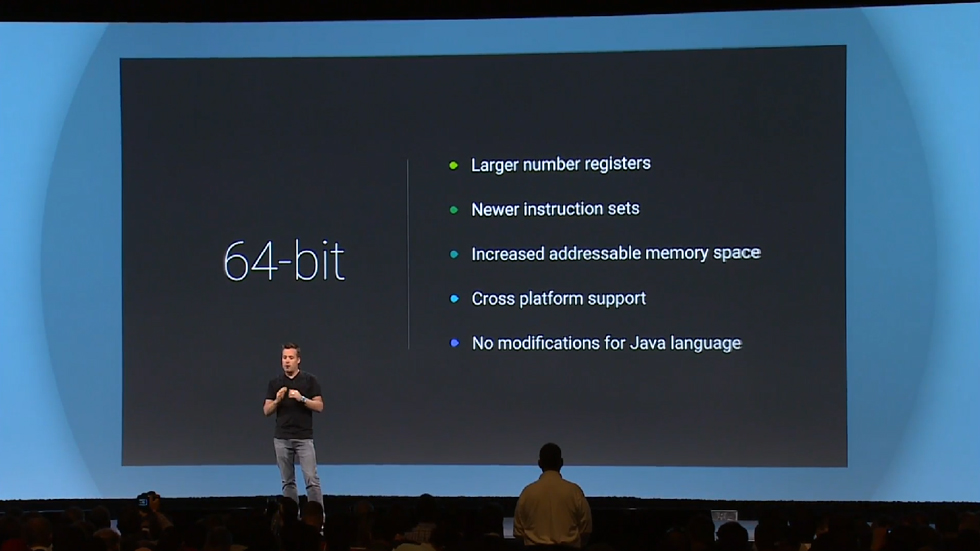 There are also some major improvements to the battery monitoring so that you can get a better idea of exactly what’s affecting your battery the most and developers can properly analyze power consumption. 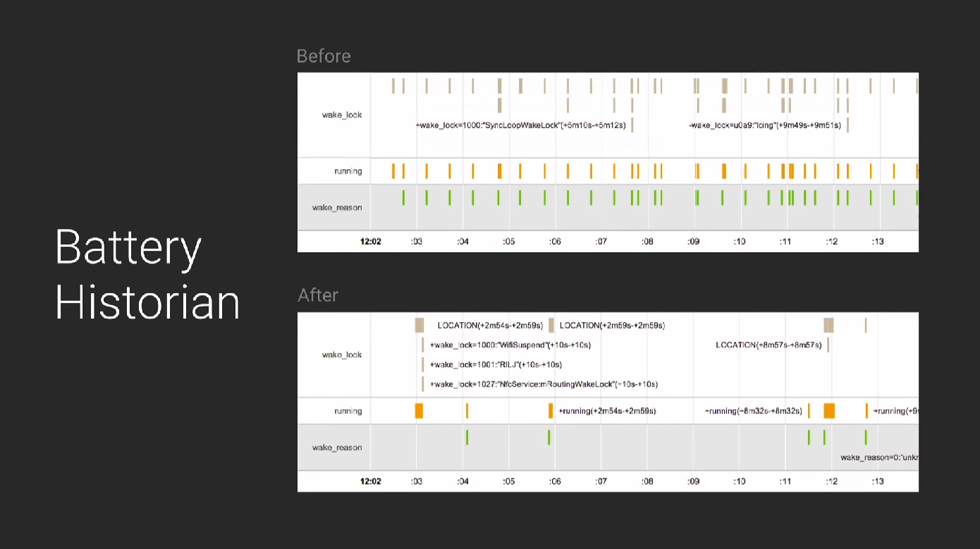 Following that, Google talked a lot about Android Wear and all of the awesome features that it helps bring to Android devices. Those include being able to control content that’s located on the phone, like say recipes or the ability to walk up to the phone and unlock it because the phone knows that the watch you’re wearing is within proximity and that you’re you.  Once you leave your phone it will immediately lock the phone with a password and make it unavailable for anyone to unlock without the password or watch being present. It also has a ton of features that other smart watches already have like music control, health activity, phone calls, text messages and the like. However, they do not appear to have a voice texting system established quite yet like the Toq. 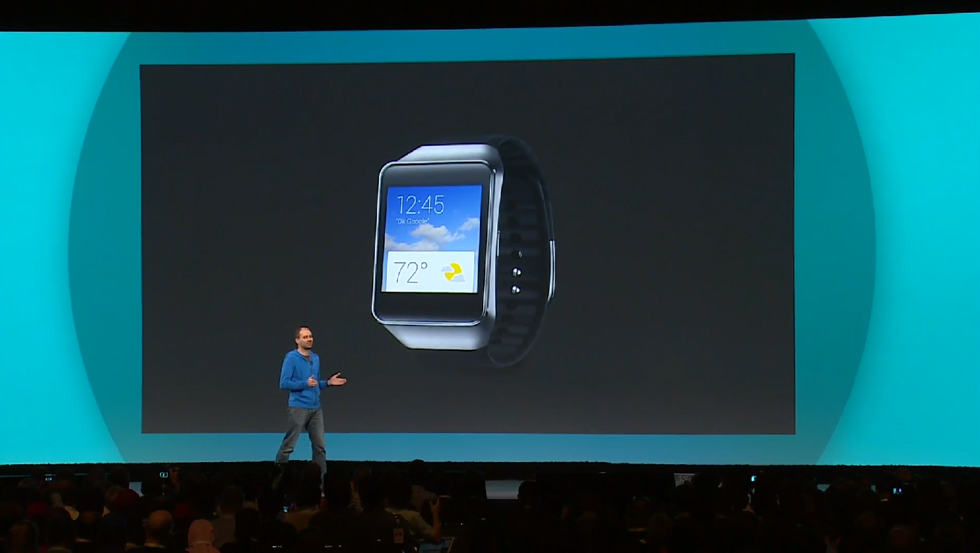 Here at Google IO they announced the new Samsung Galaxy Gear Live, which appears to essentially be a Gear 2 without the camera and running Android wear instead of running Tizen. As you can see from the crowd’s reaction below, it didn’t really get much of a reaction from the crowd. Although, they did show the LG G Watch and Moto 360 later on and eventually ended up giving all attendees a Moto 360 (once it becomes available). 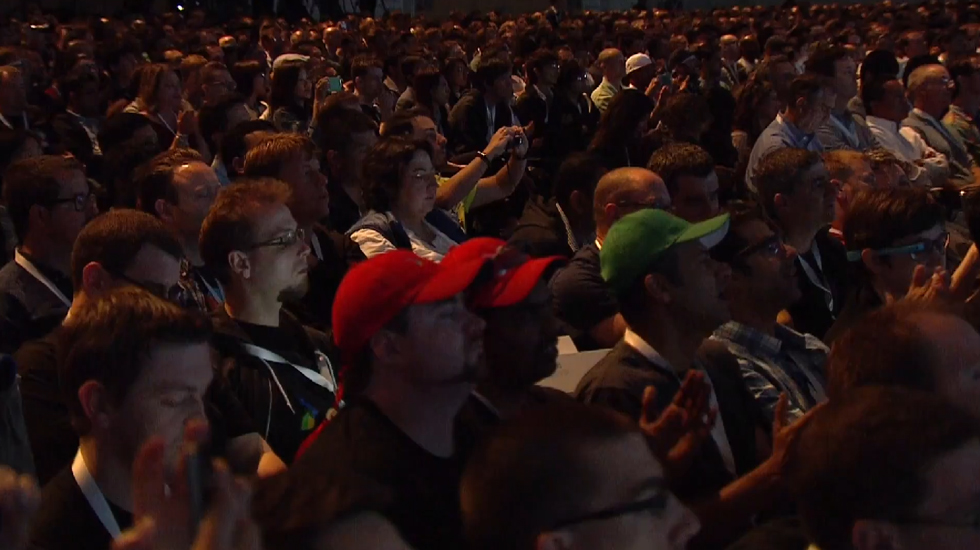 Then, Google announced Android TV, an update to their Android for TV’s platform and essentially showed and entirely revamped UI and search system and improved hardware. They overall improved the operating system’s ability to do exactly what people want it to do, easily organize and search for exactly what they want. 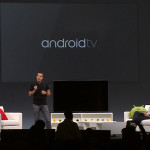 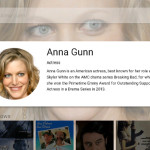 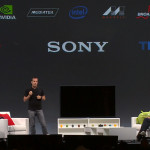 The improved hardware will include Qualcomm, Nvidia, Mediatek, Intel, Marvell, Broadcom and STMicro as SoC partners with Android TV to enable TVs to become smarter and more powerful. That includes TVs from Sharp, Sony and TPVision who will have Android TV in all of their smart TVs in the future and some of which will be available by the end of the year.

Following Android TV, Google also announced Android Auto which is effectively their way to enable Android users to plug their phones into their cars and to ‘cast their device’s display into the dash of the vehicle and to mostly control the applications on the phone over voice control. Google has tons of hardware and automotive companies onboard and will be shipping in some cars by the end of the year, keeping competitive with Apple. 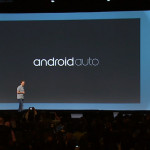 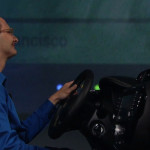 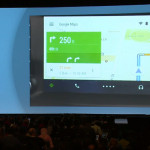 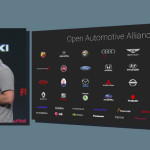 Last but not least, Google also announced the Google Fit platform which is designed to help unify the data between the different fitness apps and hardware that users are currently using with their Android devices to help them stay fit and get better data, which ultimately gets shared with Google since it crosses between apps using Google’s platform. So, once again, Google is looking for ways to figure out more about you and unsurprisingly capitalize on that data by selling you ads more effectively. Sure, its an opt-in system, but you basically surrender all rights once you opt-in for such a platform. 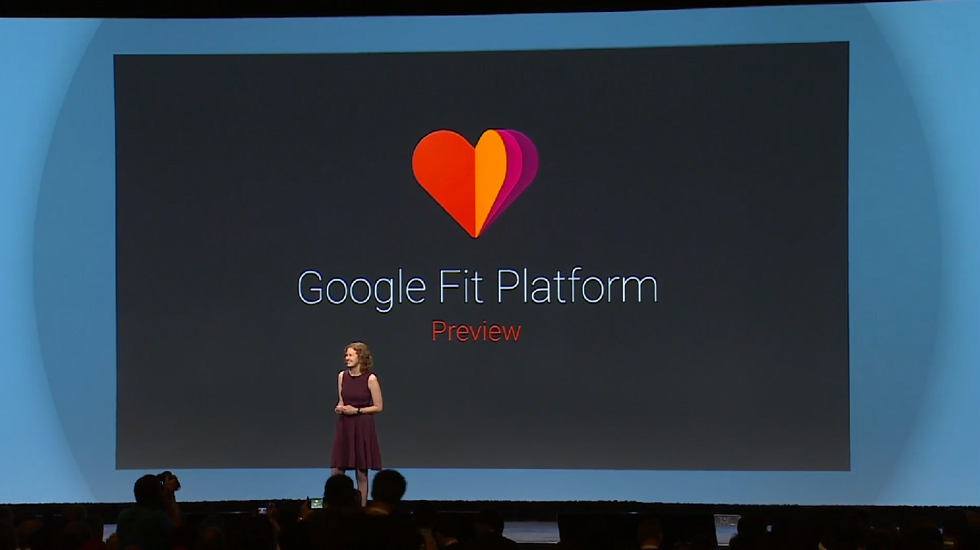 At the end, Google announced that they would be giving everyone cardboard notebooks to write down their thoughts (teasing that there would be a tablet, but not actually giving away one) and then announcing that everyone in the audience would be getting a Moto 360. I’m actually a bit glad that Google didn’t give away a ton of hardware this year because maybe it will make it easier for others to attend in the future that aren’t going for the free hardware like in past years. 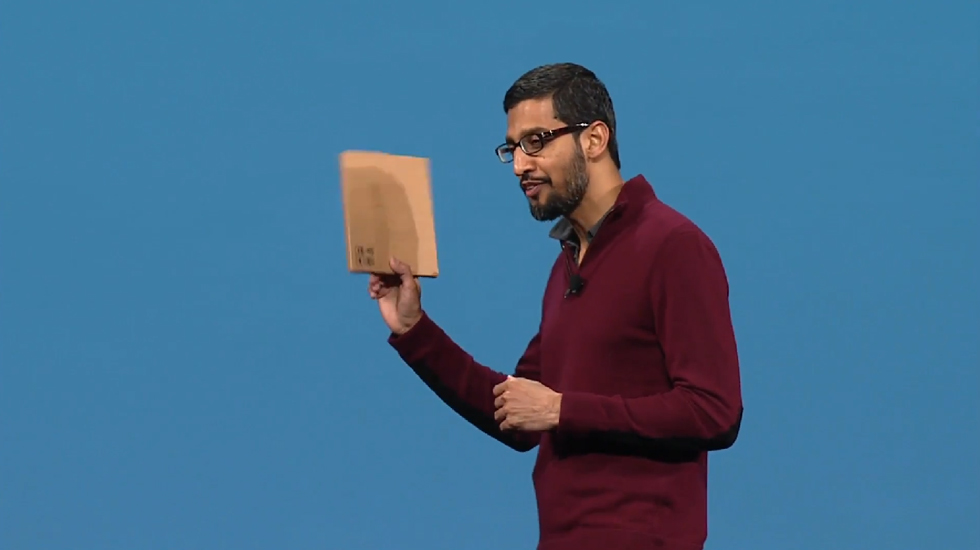 Overall, Google made a ton of huge announcements and frankly it was very hard for anyone to follow everything over the course of the 2 1/2 hour keynote, but there were almost no hardware announcements that people were expecting which means we will probably get a Google Nexus 5-like launch for that hardware and people will be scrambling to get it.