T-Mobile is going after AT&T once again, and this time they’re trying to compete with them (and Sprint) on their family plans. Family plans generally save families a lot of money because not all of the users in the household use tons of data nor do they all need that much. Generally speaking, most parents use very little data while the children tend to hog up most of the data. T-Mobile’s new plan is designed to deliver 10 GB of 4G LTE data to a family of four for the low price of $100. 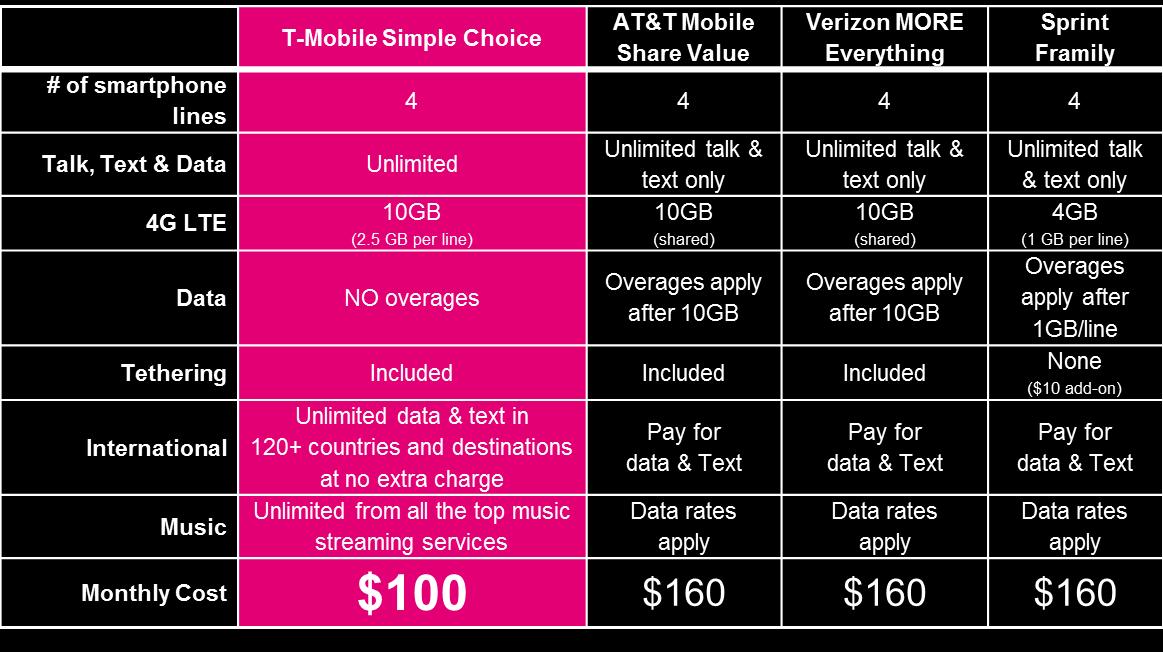 As you can see from T-Mobile’s own table, their plan is a solid $60 a month cheaper than all of the competitors, coming out to $25 per person as opposed to $40. Additionally,T-Mobile is the only one of them offering free international data and texting in over 120 countries for absolutely no extra charge. And as if that isn’t enough, if you stream your music that doesn’t get counted against you on your monthly data cap of 10 GB. Even though this is questionably against Net Neutrality.

As you can see, their plan appears to be quite awesome in terms of data you get and additional bonuses. At T-Mobile’s prices, none of the carriers offer anything anywhere near as good. And at $100 for four people it is really quite hard to argue against, unless you live in an area where T-Mobile’s coverage isn’t competitive. Because, even now, T-Mobile’s coverage is only really competitive in larger metropolitan areas than out in the countryside where Verizon and AT&T are much stronger.

But this deal has one major caveat that T-Mobile is kind of hiding in fine print. The fine print states,”Offer ends 9/30/14. Pricing for 4 lines only 2.5 GB data per line/month until 1/2/16; then 1GB data per line.” So, yes, the offer is only good until September 30th, which isn’t actually the big deal, even though that indicates that this is not a long-term offering and is really a lot like a limited time promotion that cable companies like to do to grab you as a customer. However, it gets more cable company-esque. How so? Well, the price of the actual deal does not go up after a certain period of time but the amount of data per person goes from 2.5 GB per person to 1 GB per person starting January 2nd, 2016. This makes this deal only valid for a little more than a year, which is very similar to what cable companies do to attract customers (which is what T-Mobile appears to be doing).

If T-Mobile wants to retain customers, they should not make this such a limited time offer. In fact, it seems contrary to what T-Mobile has been preaching with no contracts and no bs. But frankly, this is kind of bs because most people that sign up for this deal will have absolutely no idea that their data will go from 10 GB to 4 GB.