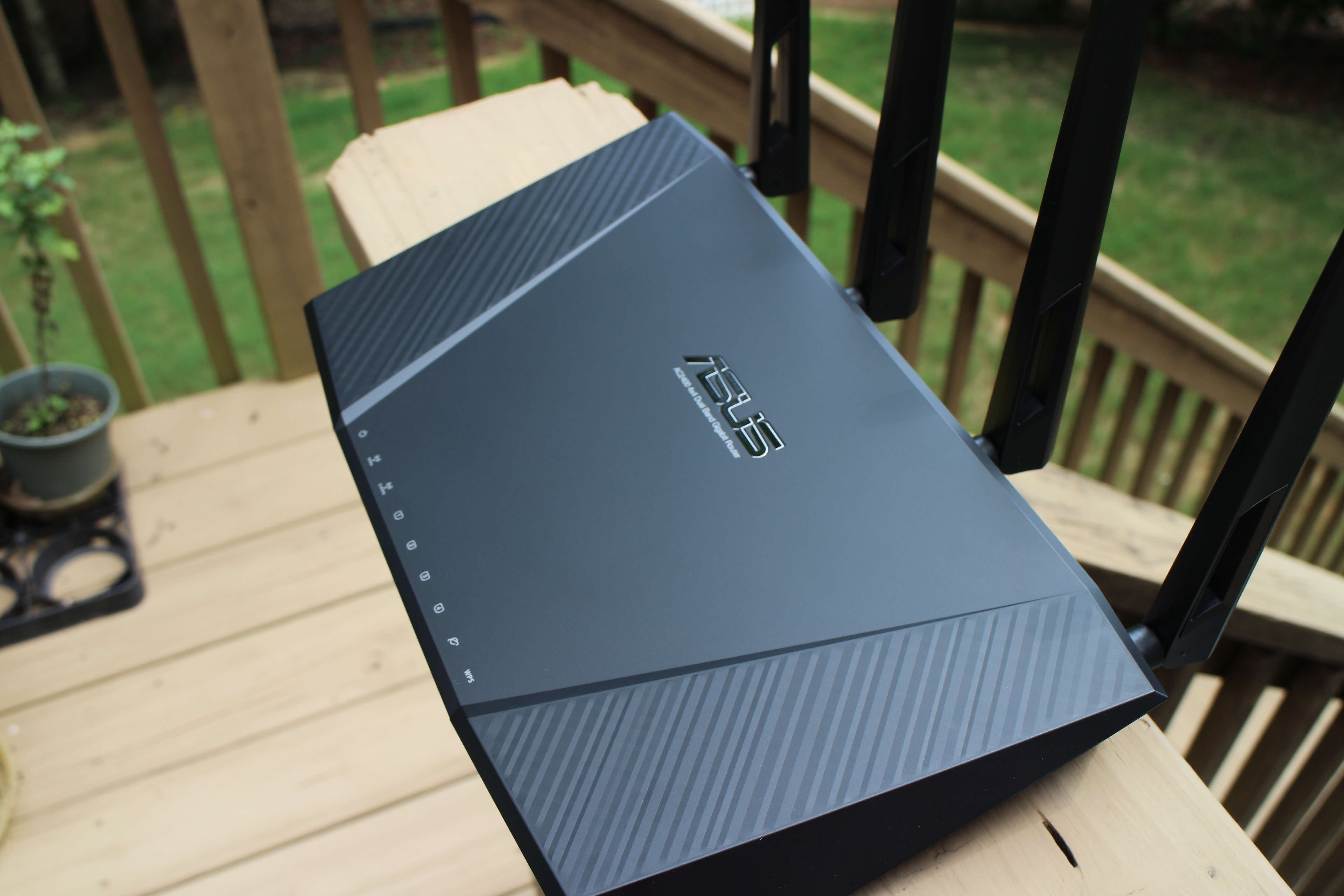 Asus has enjoyed a lot of success in the high-end router market with the last two generations of the RT-AC series in the RT-AC66U and the RT-AC68U. This summer, the Taiwanese hardware vendor is taking things to another level with the launch of the RT-AC87U, which is the first 802.11ac “Wave 2” router in the world. Wave 2 is a new set of standards that are being implemented by vendors into the 802.11 ac standard that sees the addition of new features like MU-MIMO, four spatial streams, wider channels (up to 160 MHz).

MU-MIMO functionality on the RT-AC87U is delivered through a Quantenna QSR1000 4×4 802.11ac MIMO chip. MU-MIMO groups multiple devices into a single transmission slot, making it easier to serve connected devices simultaneously, thereby freeing up bandwidth to connect even more devices. While MU-MIMO is interesting, there aren’t any clients to test it with, although Asus is set to roll out its EA-AC87 wireless client bridge later this month. As such, MU-MIMO while is enabled at the hardware level on the AC87U, it is not yet enabled in the firmware. Users will have to wait until Asus launches the EA-AC87 to make use of this feature.

The RT-AC87R and RT-AC87U are functionally the same model, with the only difference being that the “R” variant is exclusive to Best Buy. The “U” version is set to be available widely soon.

Although not the first router in the market to feature four antennas, the AC87U can stream from all antennas simultaneously as it supports four spatial streams. The Linksys WRTAC1900 also has four antennas, but it can only stream from three antennas at a time. Similarly, the Netgear R8000, which can drive two 5 GHz networks simultaneously, uses three antennas for each 5 GHz network. 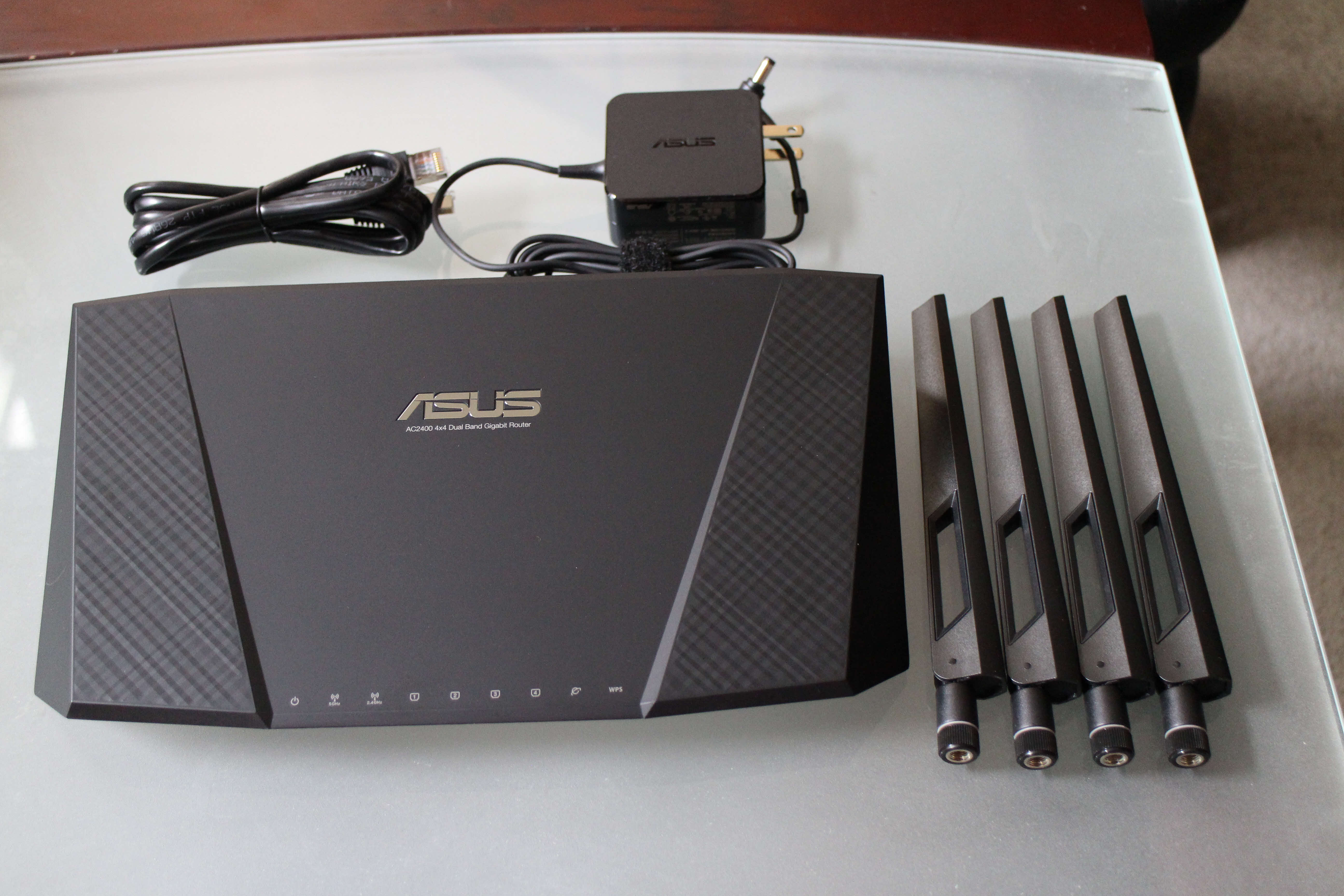 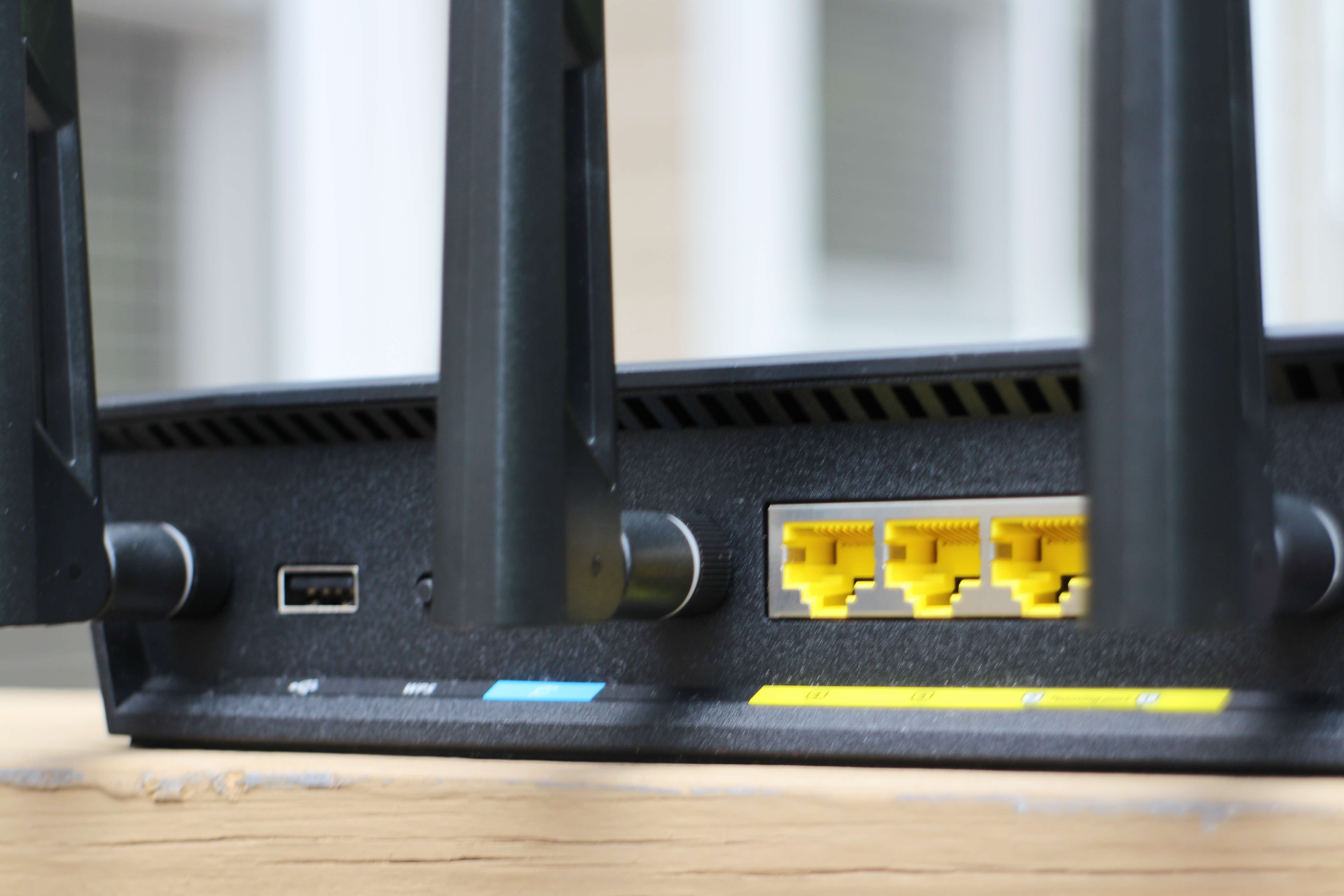 At the front of the AC87U, there is an LED on/off button, which as the name suggests lets you enable or disable the LED notification lights. There is also a Wi-Fi on/off button on the left, and a covered USB 3.0 port on the right. The use of a flap adds to the aesthetics, but makes accessing the port difficult at times. The relocation of the USB 3.0 port to the front is to limit interference with the 2.4 GHz network. At the back, there’s a USB 2.0 port, WPS button, WAN port, four Gigabit LAN ports, power button, reset button and DC-IN.

Setting up an AC87R is easy thanks to Asus’ Quick Internet Setup. The wizard automatically connects to http://router.asus.com or you can enter http://192.168.1.1 to start the setup. Default SSIDs are ASUS and ASUS_5G, and while the default networks aren’t password protected, you are required to configure the SSID at the first stage of configuration, which involves setting a password for the networks.

Here’s a look at the wireless settings section on the AC87R:

The AC87R comes with a new QoS feature that is developed in collaboration with antivirus vendor Trend Micro. The QoS service scans traffic and automatically allocates device priority based on use case. For instance, a VoIP call or gaming client is assigned higher priority over other tasks, like P2P content sharing.

AiProtection is the second feature developed in conjunction with Trend Micro, and offers security-related features like delisting clients on the network that are found to be hosting malware. Enabling this feature will also automatically block known malware sites. Parental controls are now integrated into this feature, which new features in the AC87 being the ability to restrict access on a device-to-device basis.

The router has UPnP and iTunes servers for media streaming, and FTP for file sharing. Features like Smart Sync, which allows you to transfer the contents of a connected USB hard drive to Asus’s cloud storage solution, are good to have, but it would have been of much more value if users had the ability to connect other cloud storage solutions like Google Drive or OneDrive.

While Asus has not tweaked much in terms of general layout, the vendor has added a lot of new features. However, the router’s firmware is less than robust, as changing settings causes the AC87R to randomly turn off Wi-Fi radios or revert back to default settings. The firmware issues on the AC87R are all too familiar if you’ve used the AC66U or the AC68U. For now, all that’s left to do is wait for Asus to roll out firmware updates to fix these issues.

To be able to fully utilize the throughput offered by the AC87R, you need a 4×4 enabled client, or buy two of the routers and use one as a wireless bridge. Off the bat, MU-MIMO cannot be tested as it is not yet enabled in the firmware. In terms of USB 2.0 transfers, we were able to achieve 29.4 MBps read and 26.4 MBps write on an NTFS formatted drive. With the USB 3.0 port, we managed reads of 67.1 MBps and 48.9 MBps writes. Transfers from a NAS `through wired Ethernet were also commendable at 64.5 MBps reads and 45.2 MBps writes.

If you’re looking for a high-end router, there are a lot of options available: the Netgear R7000 Nighthawk is the best choice under $200, and the Linksys WRT-AC1900 and the Asus RT-AC68U are available in the $200 – $250 segment. Newer routers like the Netgear R8000 and the RT-AC87R are closer to the $300 mark. For all of its hardware firsts, the AC87, like the AC66U and the AC68U before it, is let down by its firmware. If you’re content with using the default settings, the router functions admirably, but try to tweak anything, and it freezes. Asus is set to roll out firmware updates to address these issues, but what would have been better is it the vendor delayed the launch by a month or two and fix all bugs before releasing it to customers.