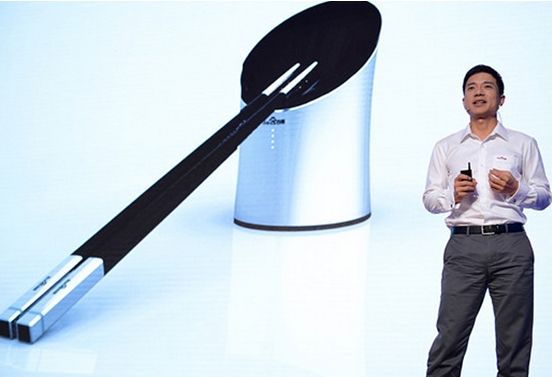 Smart devices are apparently everywhere. In fact, they are now even invading our home food space. Baidu, China’s biggest search engine, had just unveiled what is introduced as a set of “smart” chopsticks, that can help users tell if what they are eating is safe or not.

The smart chopsticks set were first unveiled last week during this year’s Baidu World technology conference event. Externally it may look like an ordinary pair of plastic chopsticks, but it is actually infused and buffed with tech inside. To use it, the chopsticks must first connect to a smartphone that uses its special app. As the chopstick touches the food item, it would then take readings of the food’s standard physical properties. The data collected from the readings would then be used to form a general assessment as to whether it is safe to eat or not.

As far as the announcement goes, the chopsticks are claimed to be capable of reading temperature, salt content and PH levels. Aside from this, it is also supposedly capable of reading cooking oil quality in food, allowing it to see whether the oil used is still good, too old, or even if it’s something that you should reconsider consuming. The oil quality detecting function is of particular interest here, as it directly tackles one of the biggest food safety issues in China today.

The idea of chopsticks infused with tech doesn’t really sound that novel, and it is hardly the first “smart” concept that the Chinese search engine giant has developed. However, the idea brings the possibility for this kind of food-utensil-turned-tech-item trend to become even more popular. Then again, the trend might have actually begun already.

No announcements for mass production yet, so the distribution price for the smart chopsticks is yet to be revealed.