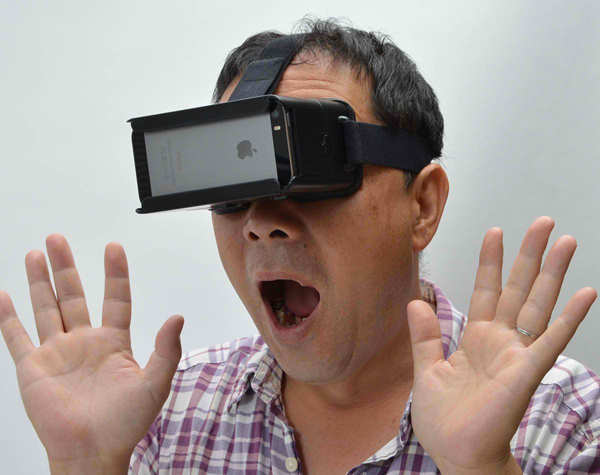 The VR boom that Oculus Rift has made created a lot of new innovations and ideas, but it has also spawned many creations that try to emulate the concept in a much simpler form. Take this new VR headset in Japan for example. If you need some quick and cheap VR experience, then this simple gadget might be the thing you need.

Called the Smartphone Virtual 3D Goggles, this VR headset has the same concept of slapping your own smartphone into your face a la Google Cardboard. There’s not much tech specs to be introduced here, but it is advertised to be able to use most kinds of smartphones with its adjustable slider. That’s right, you can slap either your iPhone, or your bulkier Galaxy Note into the exact same device. The minimum size specifications isn’t stated (we assume that the iPhone shown in the demo video might be the default), but you can use smartphones with a maximum size dimensions of up to 85x185x12 millimeters.

As for the VR part itself, there are no straight demonstrations or technical explanations as what the user would experience. It is however introduced to be able to view 3D Youtube videos “far better and more clearly than the naked eye”. It is also uncertain if it would be available with special 3D VR apps, or if it would be compatible for use with other special apps for other similar VR devices without the need for special calibrations or adjustments.

If you’re unsure if you want to throw some cash for some real VR experience, then the Smartphone Virtual 3D Goggles might be the perfect test device to see if you’re up for the VR hype. Don’t forget though that your viewing experience will still be largely affected by the screen of the smartphone slapped onto it.

The Smartphone Virtual 3D Goggles is available in Japan with an equivalent price of about $45.00.