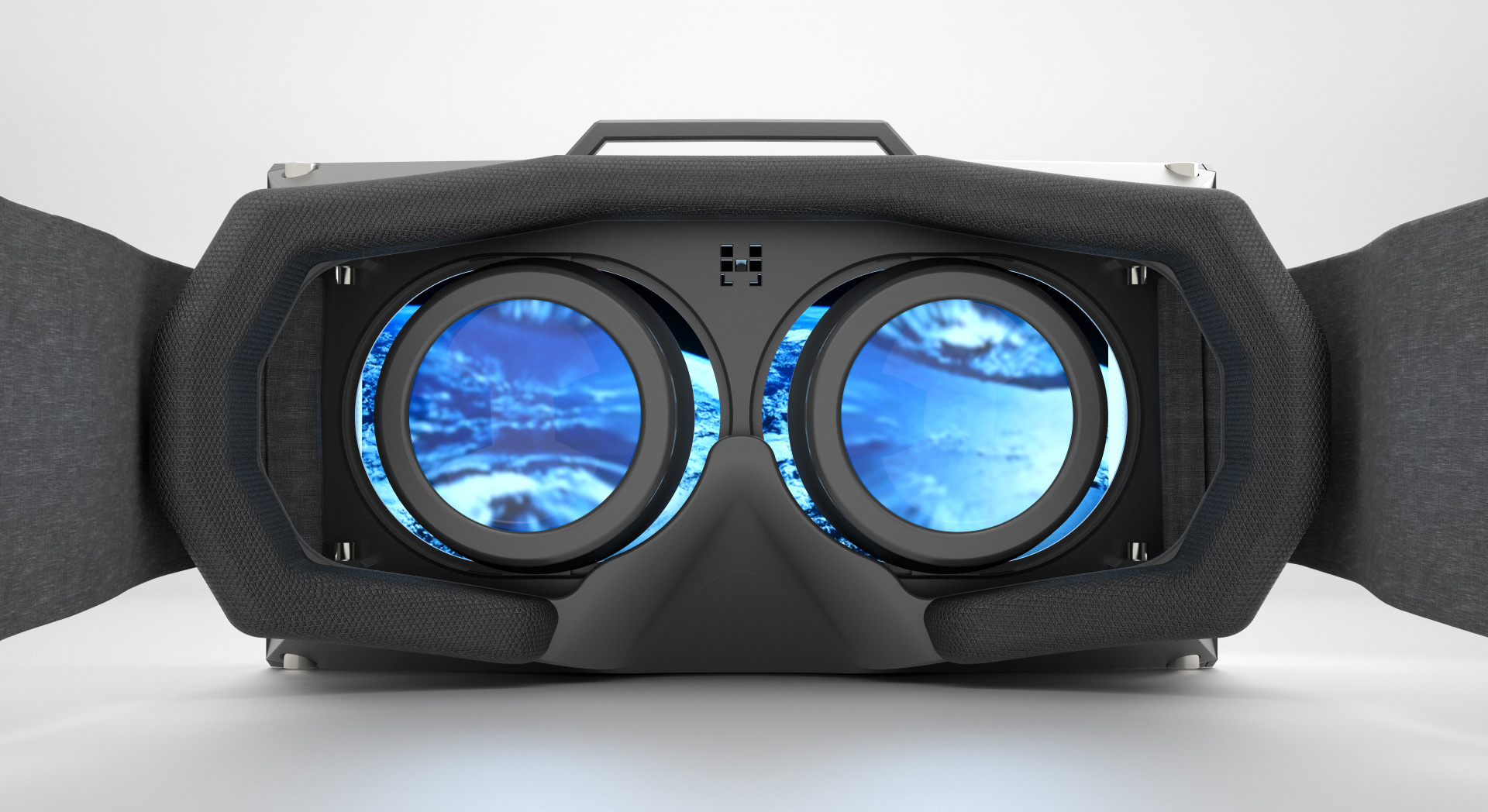 Oculus’ industry conference, Oculus Connect, kicks off this weekend in Los Angeles bringing developers and Oculus engineers together for a weekend of collaboration.

This conference comes at a time where Oculus’ stranglehold on the consumer VR market is slipping. At one time the company had a near monopoly on the market; for the last few years consumer level virtual reality effectively equaled Oculus Rift. Now, the market is getting more and more crowded as Sony, Samsung and Google (which is equally focused on augmented reality) make plays with their own VR solution.

Below is the first part of our interview. Check back in the coming days for part two.

VR World: What can we expect from the Oculus Connect conference?

SS: A lot of people are going just because they know that it’s the nexus of the emerging virtual reality revolution. What’s interesting is that there’s so much going on in the emerging ecosystem that has spawned the path that was laid by the Oculus Rift kickstarter and what has followed — the wave of other companies that are utilizing the same technical solutions to arrive at novel variants or simply copycats.

What is interesting about VR right now is that you have both the influence of major players like Oculus and Google as well as Valve who are pushing the envelope in terms of technology and thought leadership. And then you have a hotbed of community innovation — and it really is community innovation — as you have a large set of small companies that are in intellectual and geographic proximity to one another creating a garden of VR solutions and what will become ecosystem ramp into consumer VR.

With regards to Oculus Connect, what is interesting is that it’s now like a “gentlemen’s tea party” in the middle of the wild west.

VRW: During the early days of Oculus, it effectively had a monopoly on the consumer VR market. Fast forward to the present day and you have a number of very competitive VR products from a number of big players.  What gives Oculus an advantage over these companies?

SS: Right now everything is more intertwined than that characterization. Oculus has “done the dance” with Samsung on their emerging head mounted display.  And that dance that we see in public is playing out in some fairly specific ways within the supply chain for displays amongst other things. At the same time you have fairly closed door technical conversations happening between all of these companies. Everyone is one step away from one another and knows one another by first name.

Sony, Oculus, Samsung — they are all swirling around the same tight knit community and the same related sets of ideas and technologies. 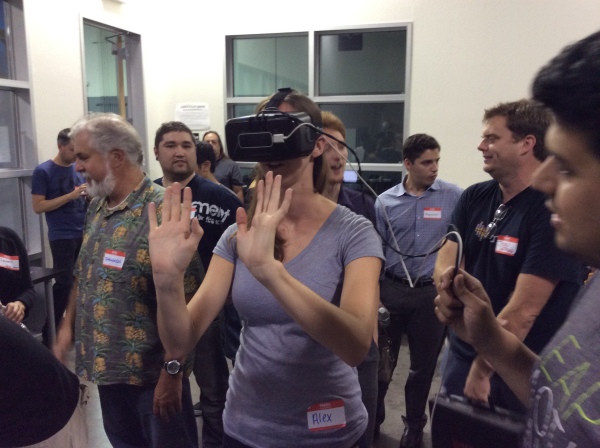 The Leap controller, paired with an Oculus Rift DK2, is used to recognize gestures

Right now, as I said, Oculus is about to throw the “gentlemen’s tea party” and has been working on a lot of stuff in the background. They are really working very hard on technology development. A lot of it is playing out in public, and I think Oculus has championed the idea to take relatively early hardware and putting it in the hands of enthusiasts and developers (to jumpstart development).

I think Oculus Connect will be a real signalling point where Oculus shows that VR will be coming soon to real consumers and the ecosystem can be moved forward.

Having said that, whereas Oculus had the early thought leadership lead, the burgeoning ecosystem is potentially huge and also heterogeneous.

VRW: Could you give us an overview of what you see as the disruptive forces in this ecosystem?

SS: Right now you have Oculus, which is the technology and supply chain leader of providing high-quality head mounted displays to the market. You also have a number of emerging players creating what I call mobile specific solutions where either they’ve got some specific hardware or content creation.

There’s also the disruptive force of augmented reality. The energy and power of virtual reality  is taking augmented reality by storm. It’s a powerful and disruptive force. In other words: VR is taking AR by storm. As ultimately it all becomes just another set of tools developers can use to create interesting experiences. All it comes down to is software developers having a different set of tools for media interaction at their disposal. All of these things will create opportunities for developers to create experiences that defy any one category. 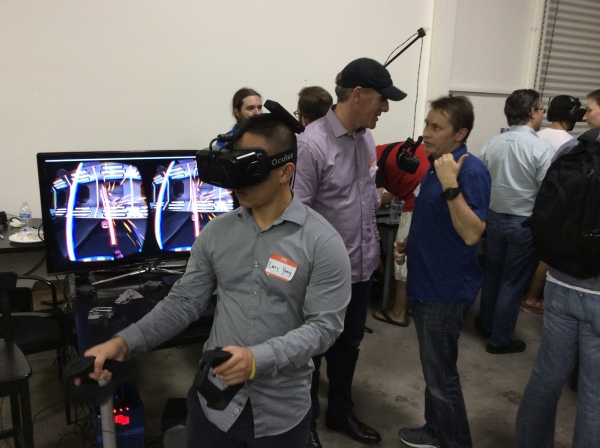 A player fights the Sith with a virtual lightsaber using the Sixsense controller.

Motion control is another major category of innovation and leadership. Sixense is the leader in motion control wih the STEM which provides remarkably accurate full motion control making light sabre battles and precise manipulation possible in 3D and VR. But there are many emerging ways to interact in VR. Threegear is a young company looking at using structured light for precise hand tracking. And Stompz has created a new low cost solution for tracking feet and kinematic motion wirelessly. Both PrioVR and Perception Neuron have created full body tracking systems. I will note none of these is generally available yet, but Sixense’s solottion is widely anticipated to become available soon.

Locomotion is a major category and innovations like Birdly, a VR bird simulator, and the Virtualizer is an innovative omnidirectional treadmill that makes it possible to run, jump, crouch, and interact while standing in VR.

Together these solutions, head mounted display, motion control, and locomotion provide what I call the pillars of VR. It’s not clear what all of the pillars are and there more pillars that will emerge forming the ultimate foundation upon which VR software and experience sap can be constructed and marketed.  These will potentially form disruption among all categories. .

There’s also the disruptive force of VR intersecting adjacent technologies. The energy and power or virtual reality is taking augmented reality by storm. Right now VR has market momentum and is driving a lot of hardware and software solutions and these are moving into the traditional realm of augmented reality and computer vision. This collision will ultimately create a new generation of tools that developers can use to create interesting experiences that defy characterization. software developers will have different set of tools for media interaction at their disposal and a market of consumers equipped with head mounted display to enjoy them.

VRW:  What are some case studies that show the disruptive power of AR and VR?

SS: A company called SeeBright is building a head mounted display which uses a VR paradigm of a head mounted display to provide an AR experience at a really low cost.  You have existing AR players that are going a more direct path of providing something like a full-frame Google Glass, and that’s a really expensive solution. With the influence of VR the idea is now “let’s just create an inexpensive headset and give it to everybody.”

That’s just one kind of example where VR is going to disrupt the headmount opportunity in augmented reality. In addition, you have some technologies that are efficiently used in augmented reality which are being appropriated by VR. One of those being SLAM. SLAM is a set of computer vision technologies for mapping real space in real time, but it turns out that SLAM is really useful if you want to track a headmount.

Another disruptive force is structured light. Structured light is very powerful for mapping real space. It can be used to track head mounted displays. It utilizes infrared light as a means to provide better structured illumination of a space and to provide depth data for real time mapping. For the second version of the Kinect Microsoft built their own structured light solution, and in the process probably built the most powerful computer vision chip in the business.

Right now these structured light solutions require a lot of power and are not quite mobile ready. But a technology that could provide real-time awareness of a room space, could be useful in AR and also VR for head tracking. The grand unification theory of augmented and virtual reality is computer vision coming to the head mounted display in the form of structured light and SLAM to provide tracking and spacial awareness to drive both VR and AR.

Head-mounted displays for VR need things like structured light and computer vision, and as a  result the world is [going to get] to augmented reality for free.