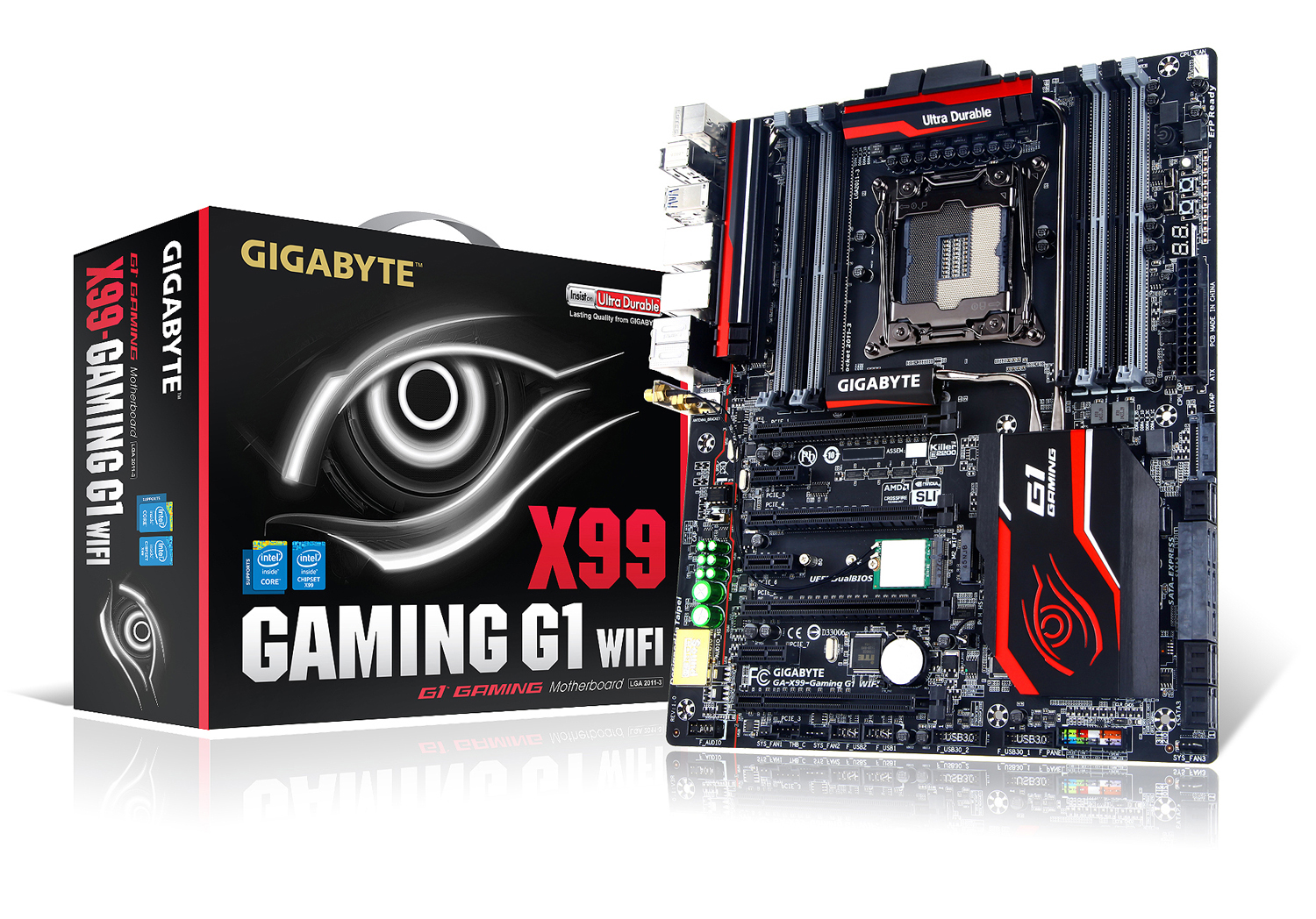 Intel’s launch of the Haswell-based Core i7 5960X and the associated X99 chipset with DDR4 memory has required a brand new series of motherboards as well. The four major vendors – Gigabyte, Asus, MSI and Asrock – grabbed the chance to introduce other new features into the just launched platform to entice the users to upgrade.

Recently, Bright Side of News* reviewed Intel’s flagship CPU with Gigabyte’s X99-Gaming 5 motherboard, which by itself is a decent balance between top performance, features and compact size. How about the flagship mainboard in Gigabyte line, Gaming G1 WiFi?

At 305 x 259 mm, the board itself is a bit larger than the usual 305 x 244 mm ATX size, but should still fit comfortably into most enthusiast oriented large casings, like the one from Antec used in this review. The first look at the X99-Gaming G1 WiFi reveals quite a stunning board, almost overloaded with all the bells and whistles one could ask for – up to 64 GB RAM if using 8 GB DDR4 DIMMs, plenty of PCIe slots for Quad GPU operation, and still three x1 slots squeezed in between. Add to it every single interface (minus Thunderbolt) on board, including SATA Express, eSATA, M2 slots, plenty of USB interfaces, and the icing on the cake: dual Gigabit Ethernet, one of which is Qualcomm Atheros KillerNIC, and Creative SoundCore 3D “quasi-DSP” with gold plated shielding. On the last one, it’s a pity that it’s still not the old Creative Sound Blaster X-Fi, as that one was more of a true audio processor that offloads the CPU from handling the audio.

As for Thunderbolt, separating it off the main board may end up to be a smart approach after all, as the 20 Gbps Thunderbolt 2 is still maturing, and there’s a question whether the users want a single port, dual port, or – for now – no ports.

The board quality, from the PCB manufacture to the components used, whether in the power department, connectors, interfaces or audio amplifiers, is top notch, something that was once seen on Asus’ early ROG boards some years ago. The design and manufacturing control is still in Taiwan, by the way, which seems to help a bit in achieving operational reliability and less RMA headache for Gigabyte itself.

The board was tested with the i7-5960X CPU and Micron’s reference Crucial quad channel DDR4-2133 kit. The latter doesn’t have any fancy heat spreaders and such, however it is the reference kit coming from the memory die vendor itself, and it doesn’t block the internal airflow with the otherwise mostly useless heat spreader decorations than that gaming memory kits usually have. The cooler was Thermaltake’s Water 3 Pro – easy to install and good enough for say 30% or so overclocks satisfactory for most users, but not more.

In this early review, we looked at the BIOS tuning options, the Gigabyte auto overclocking choices as well as something not usually focused on in performance tests: the selected benchmark performance dependency on the CPU uncore (i.e. cache and memory controller) and memory bandwidth and latency settings. The subsequent review parts will focus on other benchmarks and further CPU and memory tuning experiences.

Here are the results from default all the way to 4.3 GHz. See the variations once the CPU uncore and memory come into picture: 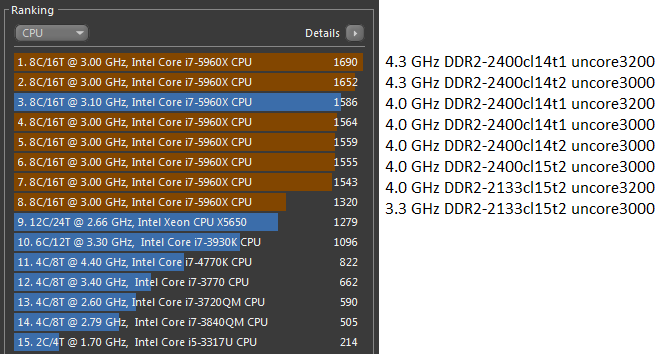 Same here – even though CPU compute-heavy ray tracing render routines are usually little memory bound, there are small but measurable benefits from tuning up the uncore and memory, as you see here (note: Cinebench could not detect true CPU clock speed).

At the start, I felt it could be related to the particular CPU sample used, or even the cooler limits, but the plateau for stable performance on this particular board was 4.3 GHz with Turbo turned off, with uncore set at 3.2 GHz. This by itself is a no mean feat, as – for the current Haswell-E at least – I’d not run the CPU at anything higher than 4.0 GHz for regular everyday operation, if intending to keep it up and running nicely for at least a year until the Broadwell-E refresh comes in handy. For a start, the i7-5960X at 4 GHz with 3.2 GHz uncore and DDR4-2400 CL 14-14-14 memory is a very decent top end setup by any means.

After all, even though the Haswell-E/EP high end parts were made in three die versions: 8-core, 12-core and 18-core (the latter two only as Xeons for workstations and servers), it’s logical to expect that, within given TDP tolerances, only the 8-core version would overclock sufficiently above the base setting, like above 30% with standard board and cooling stuff. The Gigabyte overclocking competition at IDF, that we covered here, reached the 6 GHz barrier on LN2 with some CPUs, but that is of course not a production setting. 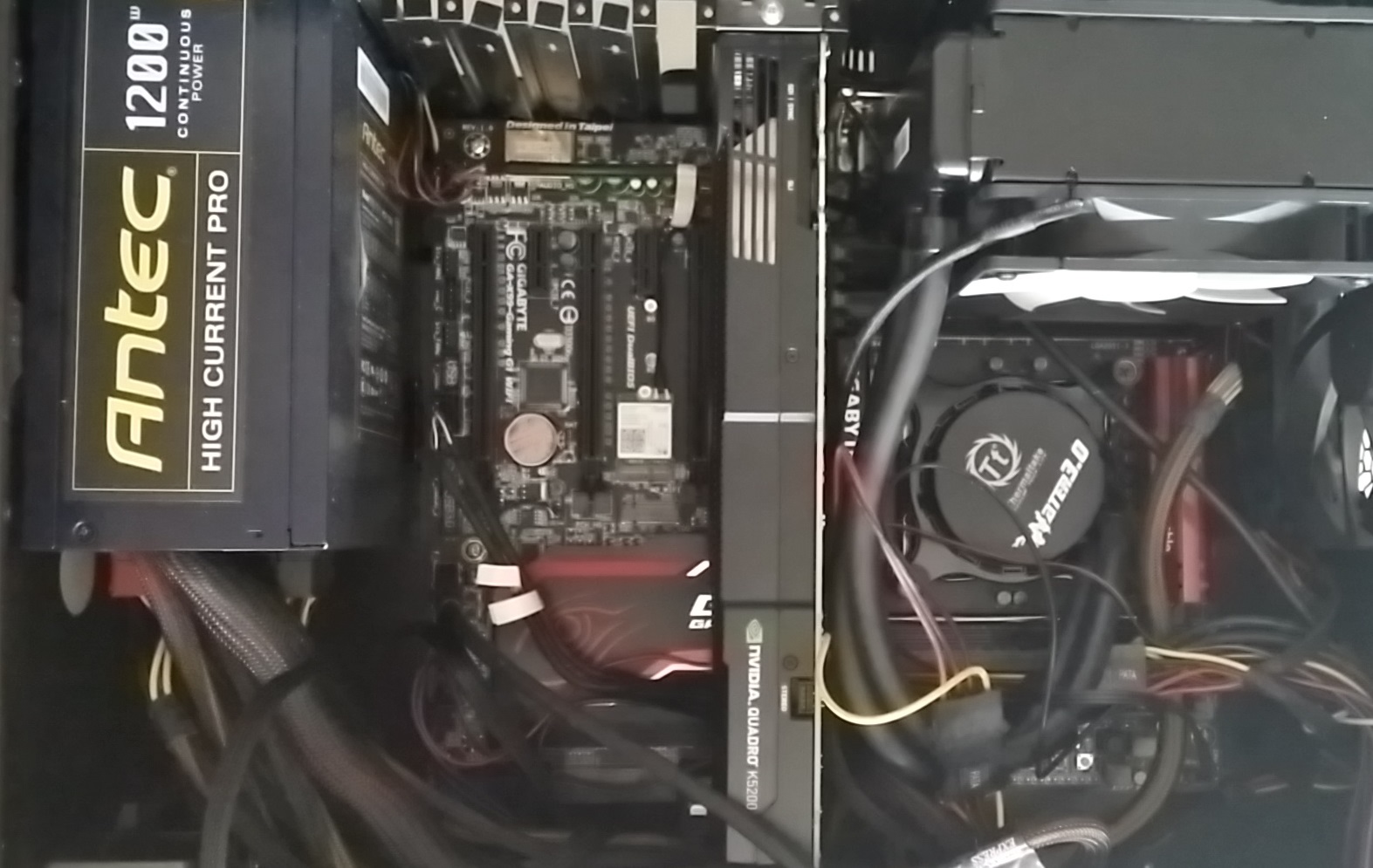 A look at the board in-operation.

I went ahead with a BIOS update from default F4 to the latest F8c BIOS version, just released this weekend, which promised to solve lots of early issues and improve tuning. However, the results were overall about the same in this round, so yes it could be that the CPU itself was kind of topping out at 4.3 GHz for stable production work. Either way, more memory modules await us to try how far we can go with the memory overclock. Whether upgrading this board as well to that “OC Socket 2084” seen on Asus Rampage V Extreme and Gigabyte X99 LN2 board is a benefit, we should know soon too.

In conclusion, the Gaming G1 is probably the most feature rich X99 based high end board in the market right now, based on the bells and whistles. The overclocking side may leave a bit more desired on the extreme side, but we’ll try it anyway with other CPU and memory samples soon.