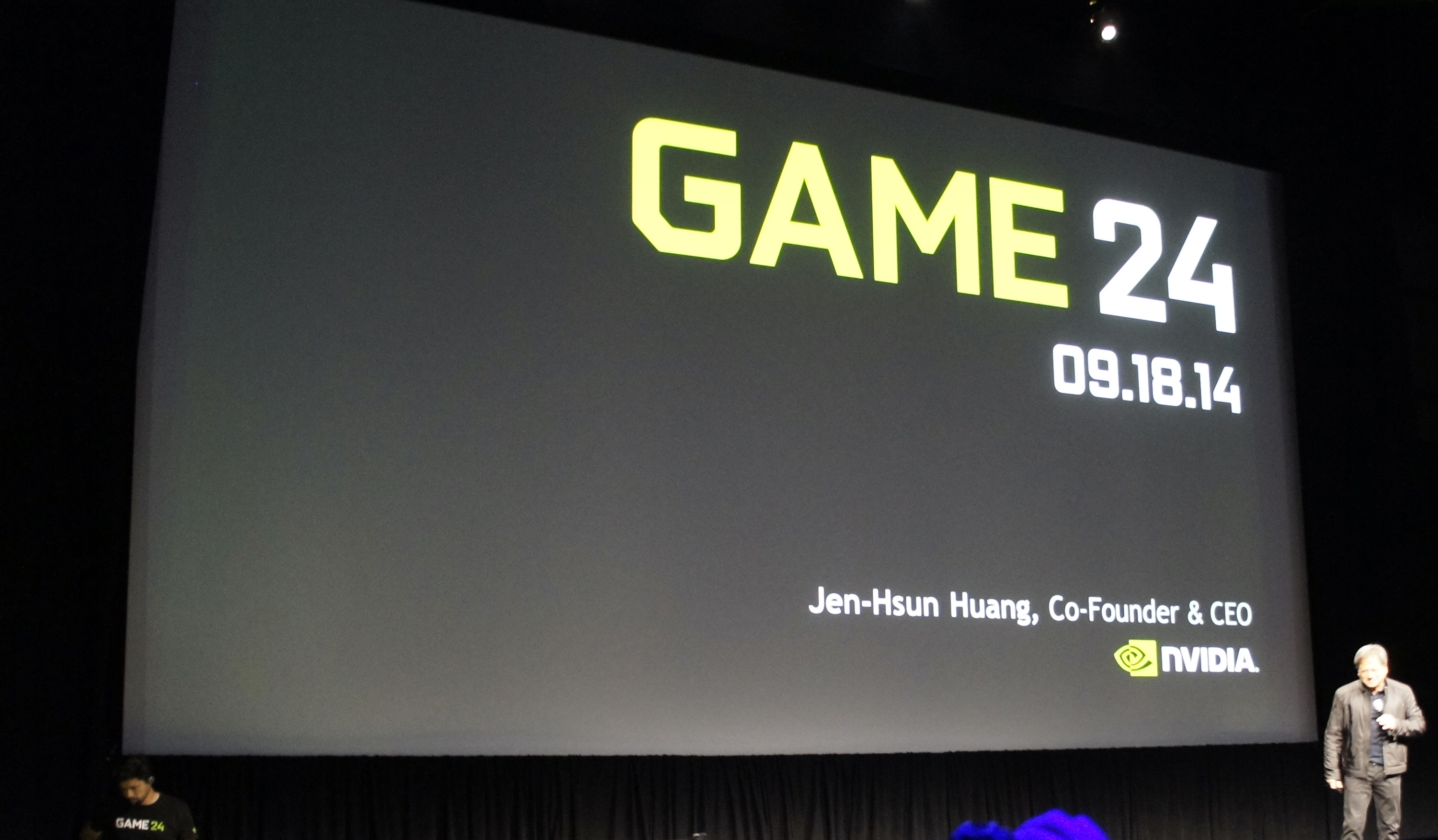 This past Thursday (September 18th), Nvidia (NASDAQ: NVDA) hosted its GAME24 event from Hangar 8 at the Santa Monica Airport in Los Angeles. The event was billed as a “celebration of PC gaming”, and it certainly was. However, the main event was no secret to those in the press – the release of the new top end Maxwell GPUs: GTX 980 and GTX 970. This announcement was made in conjunction with the NDA expiry of the GTX 980 reviews, including our very own review of the GeForce GTX 980.

Nvidia CEO Jen-Hsun Huang soon took the stage to welcome the attendees and to present Maxwell and the new technologies that come with it.

Maxwell has a variety of improvements over the previous generation of GPU technology. Memory consumption has been drastically reduced, using approximately 25% less memory bandwidth on the games Nvidia tested with when comparing the GTX 980 to GTX 680.

Energy efficiency was also improved, with Nvidia boasting a 2x improvement in efficiency (measured in performance per watt as determined by frames per second).

DSR is designed to be used with games that are already running at maximum visual settings and are still getting extremely high framerates. DSR uses the extra GPU horsepower to render the frames at 4K resolution and downscale them to the monitor’s native resolution, resulting in improved visual fidelity.

MFAA is a different type of anti-aliasing designed to provide higher levels of AA at a lower performance cost. Nvidia stated it as “4x MSAA Quality at 2x AA Performance”. That’s not entirely accurate as the number was compared to 4x MSAA on a GTX 680 vs 4x MFAA on a GTX 980. As seen in the slide below, going from 4x MSAA to 4x MFAA on a GTX 980 provides an increase of approximately 27%, going from 41 FPS to 52 FPS. Nevertheless, the improvement is still impressive.

VXGI (Voxel Global Illumination) is a low-cost (in terms of performance) lighting technology. The results looked very good and ran in real-time. They also demonstrated a debunking of the moon landing conspiracy using VXGI lighting effects to simulate the images of the moon landing.

After the presentation, there was more food and drinks, as well as a variety of stations set up to try out Nvidia’s tech.

The Oculus Rift one was definitely the most impressive of all the demos on display. Even those prone to motion sickness have no problem enjoying games with the headset. The experience was totally immersing and very smooth. The immersion was so complete that people around me took the opportunity to take amusing photos.

Nvidia also did a massive giveaway, giving away a total of approximately 45 products. Considering the crowd appeared to be about 300 people, the opportunities to win were quite good. Even more appealing was the fact that the giveaways consisted solely of GTX 980 and 970 GPUs, 4K monitors from ASUS and Acer, and Nvidia Shield and Shield tablets. Each attendee also received free game codes for Assassin’s Creed: Unity, Far Cry 4, and The Crew. Considering the event was open for free public registration, the event was definitely worth attending.

Prior to the start of the event there was a hands-on preview of Zotac’s new GTX 980 and 970 offerings. Both product releases here and here, so we won’t go into too much detail here, but pictures of some of the new cards are below: