Thanks to our friends at ecoATM, we were able to gather some really interesting statistics about people’s trade-in/recycling behaviors after the iPhone 6’s launch. ecoATM is a company that owns and operates 1,100 machines across the United States that allow people to trade in their electronics and have them recycles for an instantaneous cash payout. ecoATM has been in this business for quite some time so they have experience with new product launches and sudden jumps in trade-ins.

As such, it comes as no surprise that they have some really interesting data about the iPhone 6 launch’s impact on iPhone trade-ins nationwide. Thanks to their data, we can see exactly what people are upgrading from as well as what kinds of devices are being replaced the most by iPhone 6s and 6 pluses.

So, what do these colored dots translate to? What do the blue (light), green (medium), light green (high) and orange (enormous) demand dots come down to? 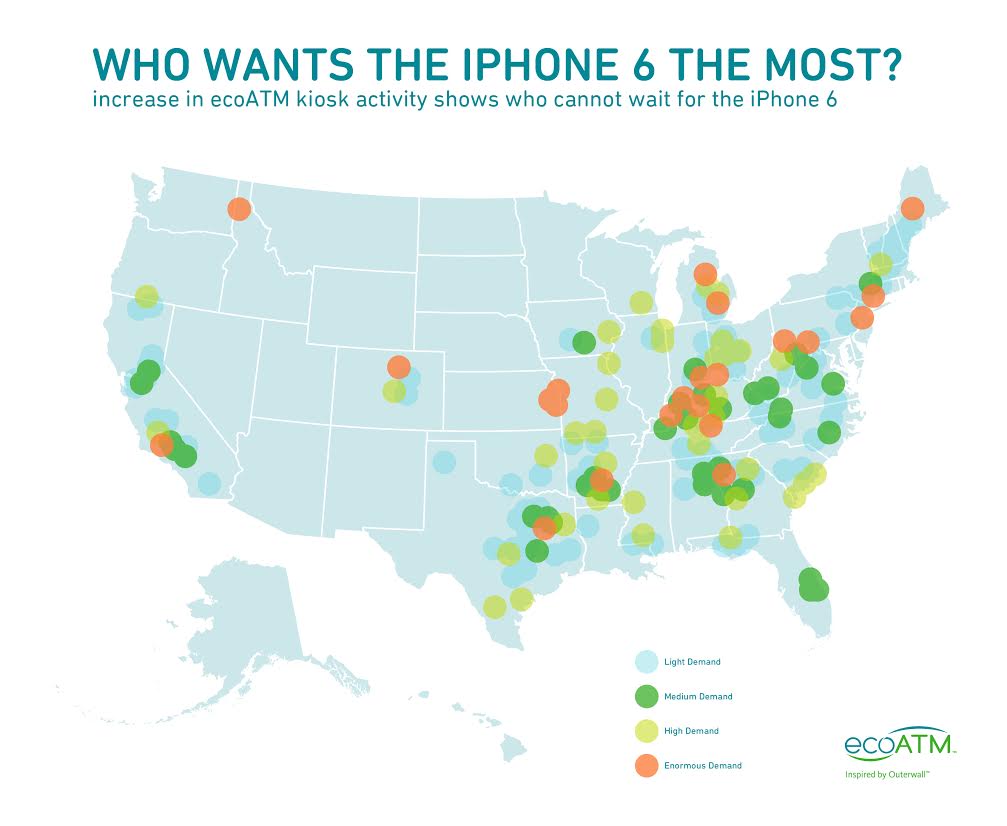 Since the iPhone 6 and 6 plus became available, ecoATM saw an increase of 80% on iPhone-related activity across their entire network of kiosks. And specifically in California, trade-ins were up 104% and in Texas 92%. EcoATM says that they normally expect such jumps in these areas because these regions are populated with plenty of techies. They did, however, discover some outliers including Tennessee, which saw an increase of 195% and Massachusetts with an increase of 168%. When looking at the map, it does seem a bit odd that the Tennessee/Kentucky/Ohio area is so dense with trade-in activity but the stats don’t lie. They also saw New York increase 92%, like Texas, which isn’t surprising considering how many iPhone users live in New York City alone.

In addition to actual iPhone trade-in’s ecoATM’s own site saw a huge amount of increase interest in their phone recycling for cash kiosks. Their website has seen a 200% increase in sessions since the launch as well as their kiosk locator page saw an increase of 250% during the same period since the launch.

Overall, if you take all of this trade-in data into consideration it really seems like the iPhone 5 was the primary device that people were looking to replace with an iPhone 6 or 6 Plus, which admittedly isn’t very surprising. What may actually be more interesting is the regional increases, especially in Tennessee. Either way, there is a lot of very good data about the needs and wants of iPhone users and it really looks like a lot of people buying the iPhone 6 were already iPhone users and many of them were very likely iPhone 5 users too.