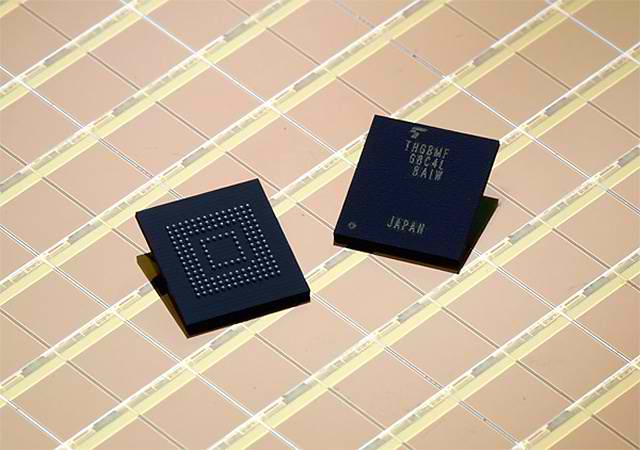 Toshiba (TYO: 6502) has announced the roll out of its very first 15nm NAND flash memory chip. The chips are already available for sampling starting this October, with the first 16GB version chips to be shipped first and the rest of the other size versions to follow shortly.

This new NAND flash memory chip utilizes both the flash memory chip and its controller in a single board. Toshiba claims that this optimization technique promises an overall increase in its data transfer speed (8% read, 2% write), as well as making the chips around 26% smaller compared to its predecessors. Its updated interface also boasts a significant increase in speed, thanks to its improved peripheral power circuit tech. The design clearly markets it into the mobile device realm, where it can be perfectly suitable to most smartphones, tablets and even notebook PCs today.

At 15nm, the new flash memory chips currently have the smallest class chip size in the world. The memory chips will be available in 8GB/32GB/64GB/128GB sizes, and are to be divided into two main categories, the high-end Supreme line, and the middle to low-end Premium line ups. Each chip will roughly have an average size dimension of 11.5 x10-13 x1.4 mm, and are also slated to be eMMC Version 5.0 compliant.

Production of the new flash memory chips already started earlier this year, with most of Toshiba’s 19-nm manufacturing and fabrication facilities converting into the current size factor. Even before then however, the Japanese tech giant had already revealed its plans in the mobile tech market by announcing its development of updated controllers for smartphones and tablets.

As for the new 15nm chips’ commercial availability, Toshiba states that it would be around as early as January to March of 2015, with the 8GB and 128GB models to follow later around April to June within the same year.