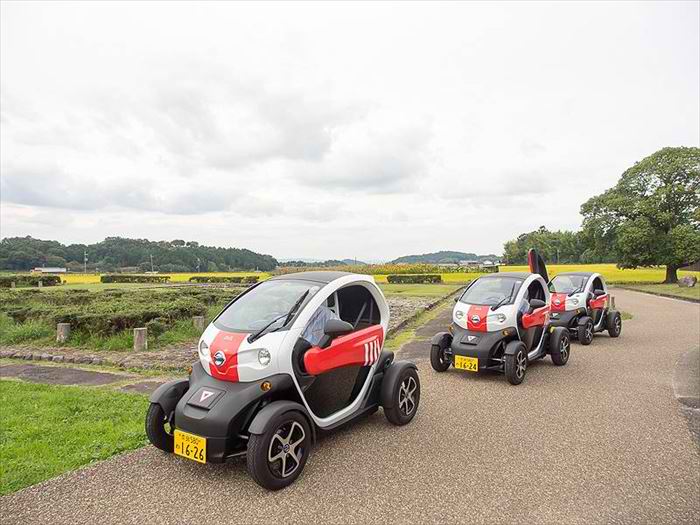 Japanese telecom Softbank (TYO: 9984) , in a project dubbed as “Super Miniaturized Mobility”, will be deploying a fleet of tablet PC-installed ultra-compact vehicles across the village of Asuka in Nara prefecture, Japan. Starting this week, citizens of this village will now have rental access to the small form vehicle, which can be used to conveniently navigate across several of the village’s public areas, famous tourist spots and feature destinations.

Michimo is the official name of this electric, ultra-compact vehicle. It is actually a customized version of Nissan’s New Mobility Concept vehicle, which was introduced as a testbed model last year, to show the need for a small form factor, short-distance vehicle for single passengers. The vehicle’s use of electricity, compact size, and the relative small size of the village of Asuka made this model the perfect vehicle to be used for Softbank’s project.

Using the iPad Mini that is integrated into the Michimo unit, passengers can directly choose a target destination around the village without the need to rely on other map apps. Its custom navigation system would not only provide the optimal route and GPS location, but would also check any related updated information. The operation is not entirely automatic however, and unlike a certain prototype driverless car, the user would still have to drive manually to their destination.

In addition, the navigation system would also include voiced guides which would provide direction, as well as function as a sort of electronic tourist guide. The information provided by this feature will be constantly updated by Softbank’s cloud database and local information sources.

Asuka is popularly known by avid tourists, as it is the site of Japan’s ancient capital, having a number of important historical sites and spots that can be publicly visited. The deployment of Michimo units across the village would not only provide a convenient form of transport for the sparsely populated elderly community, but could also potentially stir tourism, since visitors may also rent the vehicle to drive around the village easily.

On an added note, while the idea of using tablets on cars for guidance and navigation is nothing new, the idea of integrating tablets to personalized vehicles can be quite promising. The concept may be important in the development of automated single use cabs that can effectively replace regular cabs, which are popularly used for quick suburban trips.

In addition to Asuka, Softbank also plans to deploy the Michimo units across nearby towns and cities within the prefecture, particularly in the town of Takatori, and Kashihara City, home to another popular historical tourist site.