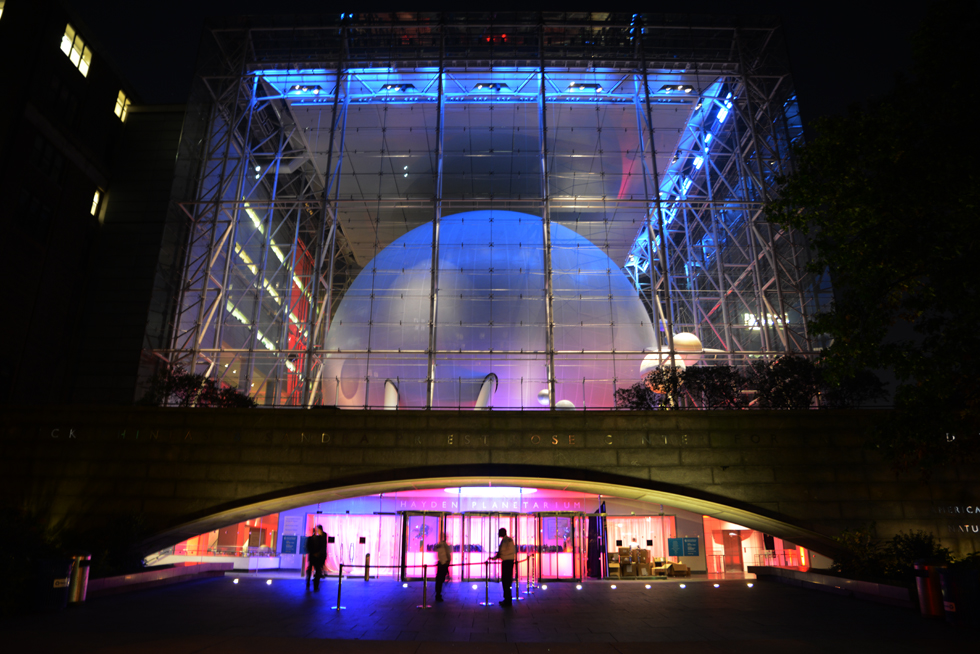 Last week, Qualcomm (NASDAQ: QCOM) held a press and analyst event in New York City, spread across the Plaza Hotel and the Hayden Planetarium. It was a combination of a wireless modem workshop with a 4K content push. The day began with presentations from Verizon, Ovum, JPR and Qualcomm. These presentations were followed up by a demo session showing off Qualcomm’s various wireless technological capabilities including their LTE Broadcast capabilities as well as WiGig, which was one of the focal technologies of the day. Later in the evening, Qualcomm held a press event with film makers to talk about 4K as well as the CTO of the MLB to talk about the importance of 4K to sports. Oh, and one of the guest film makers was none other than Guardians of the Galaxy Director, James Gunn.

Qualcomm’s presenters for the day were VP of Worldwide Marketing, Tim McDonough and SVP, Product Management at Qualcomm Raj Talluri. 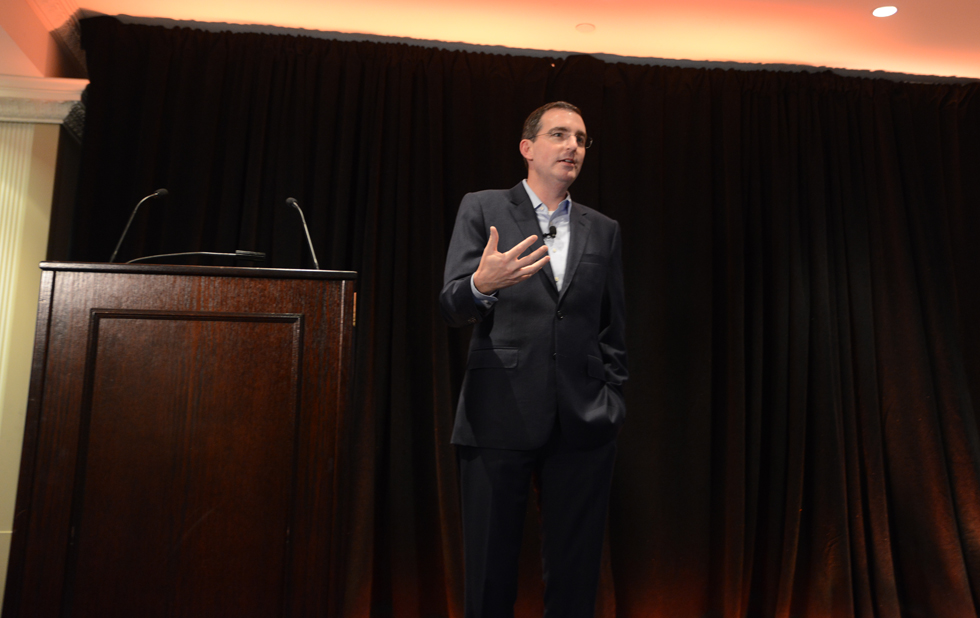 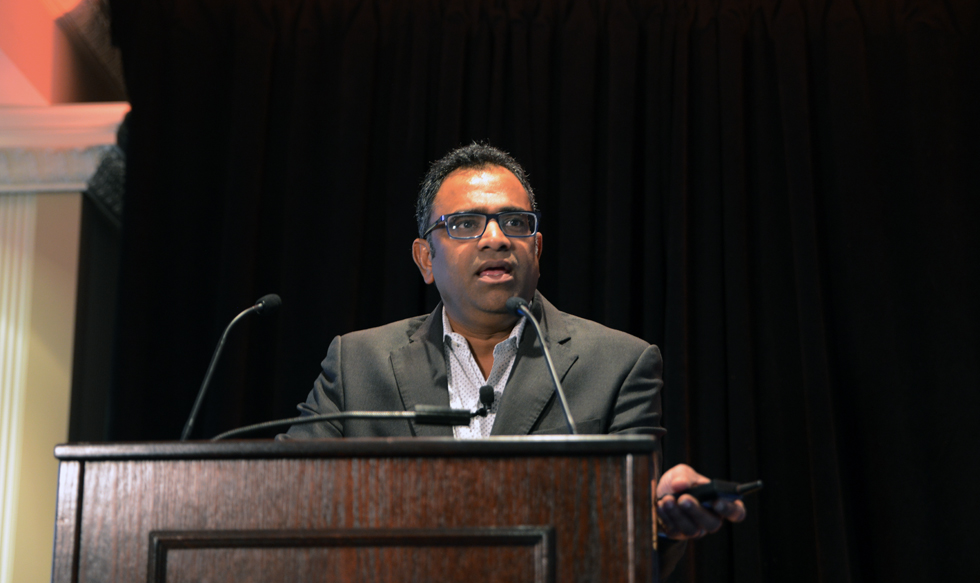 Raj Talluri talking about the importance of Qualcomm’s wireless technologies

Most of these presentations covered the importance of technologies like LTE Broadcast (Verizon) and 4K video, with Jon Peddie’s presentation ensuring that you know that 4K is coming whether or not you like it. And he’s not wrong. 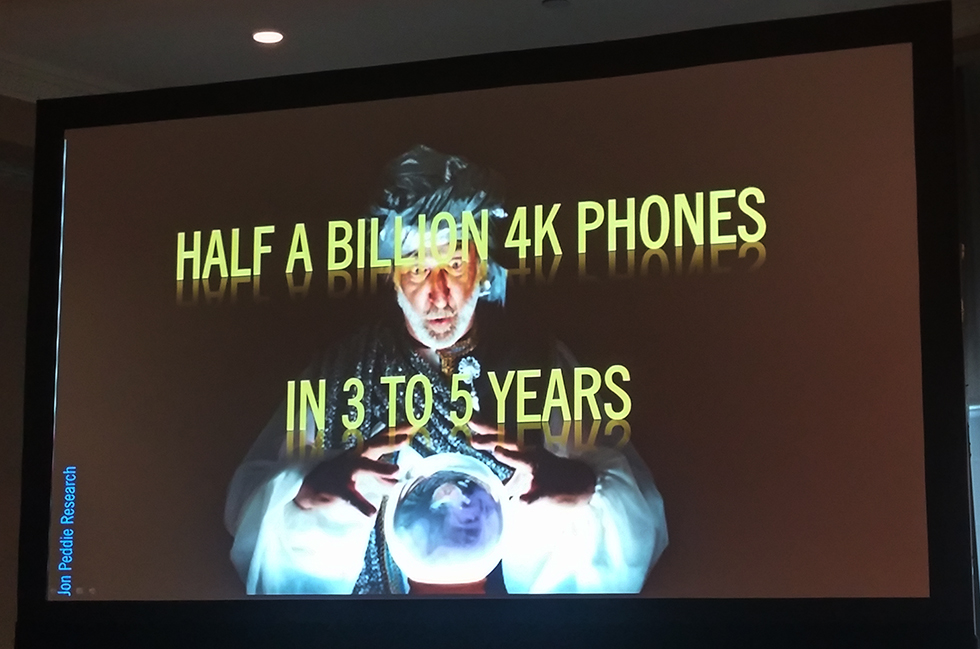 During the wireless demonstrations, Qualcomm showed off something that may be a taste of what’s to come with the integration of WiGig technology into their SoCs. The company formerly known as Wilocity has developed a very high throughput 60 GHz Wi-Fi technology also known as 802.11ad or WiGig. WiGig currently enables speeds of up to 2 Gbps, with the next generation doing 4 Gbps. At the demo room, Qualcomm showed off their upcoming Snapdragon 810 streaming a 4K video from one tablet to another, which would then display the 4K video on a TV in 4K. This is the first time they’ve shown the Snapdragon 810 SoC in public and the first time they’re showing 4K video streaming over WiGig with the Snapdragon 810. 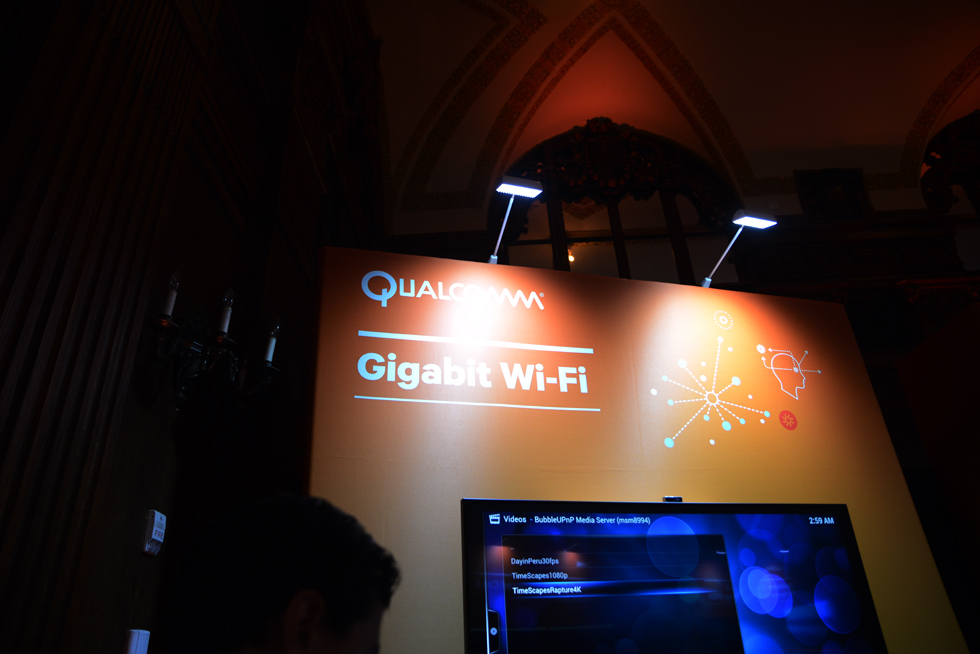 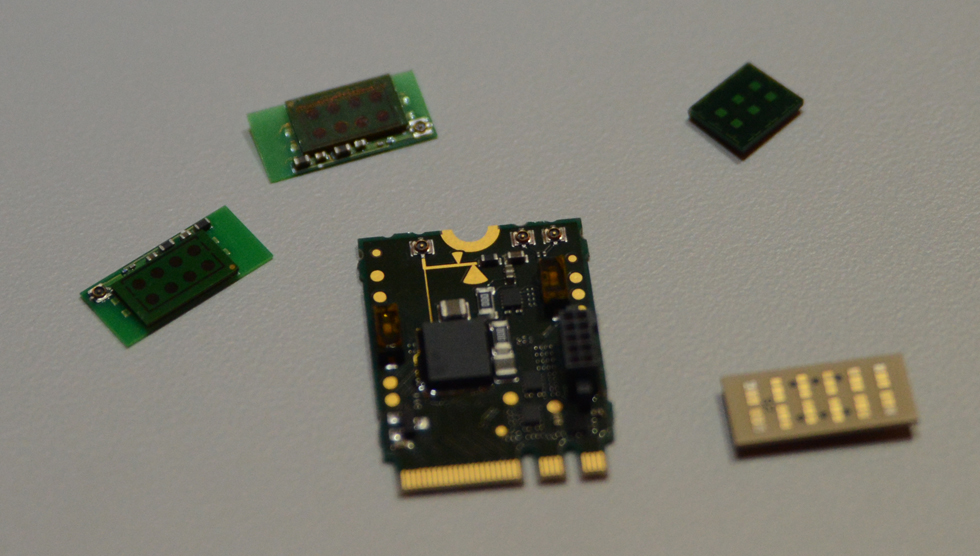 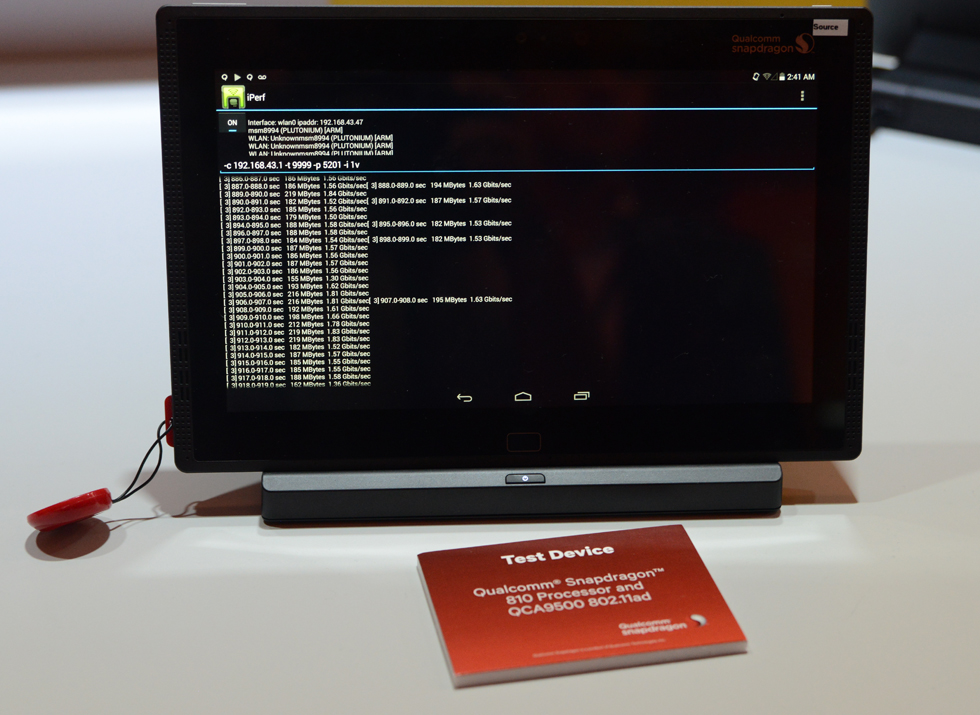 Currently, Qualcomm is the leading vendor of SoCs capable of creating 4K videos for consumers. It was the first to market with the Samsung Galaxy Note 3 and the Snapdragon 800. The Snapdragon 800 was the first chip that enabled 4K video recording and Samsung’s Galaxy Note 3 was the first phone to enable that. In fact, we took a video testing out that feature at this last CES just to test that out. In fact, at this moment, Qualcomm’s SoCs power 12 different Android devices that are capable of recording in 4K, which includes the featured phone of the night, the LG G3. In fact, two vendors that make these 4K capable phones, Sony and LG were on hand to give people hands on experiences with the LG G3, Sony Xperia Z3 and Z3 Compact. 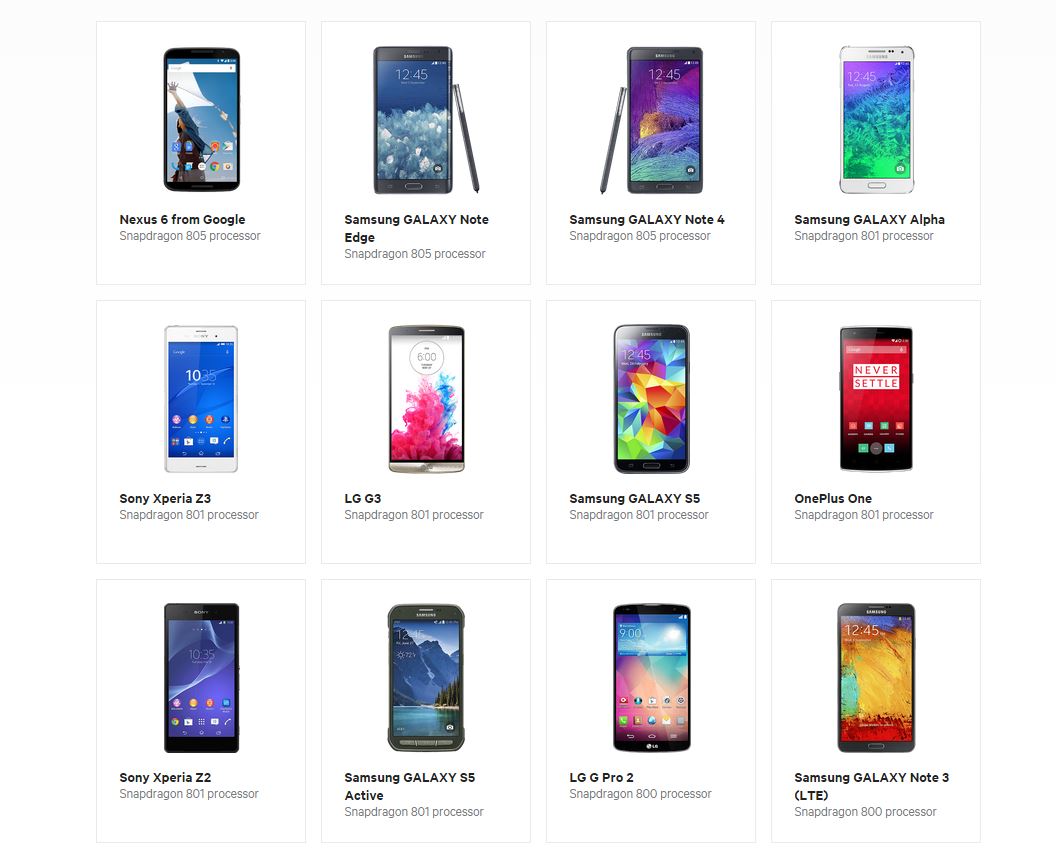 The real key here is that Qualcomm is talking about 4K content creation to help satisfy the vacuum left by Hollywood. As of right now, there’s virtually no 4K content out there for people to enjoy on their 4K TVs unless they haven’t seen House of Cards or Breaking Bad before (both are available in 4K on Netflix). The reality is that 4K content creation on phones is already here and possible and that we already have TVs selling for under $999 that you can play that content on. Not to mention having 4K video quality means that you can always downsample and get even better quality 1080P and 720P videos as well.

The LG G3 was brought up a lot over the course of the press event in the evening, as Qualcomm had given both Nathan Silver and James Gunn LG G3 phones to use for 4K video recording. In fact, Nathan Silver made a quick and short film in 4K called “Family Affair” with the phone that Qualcomm gave him. Nathan Silver’s dad eventually came on stage and they talked about the short film, at which point James Gunn came on stage to talk with Tim about how 4K is important to him and how having a 4K phone is valuable for him in film making. Needless to say, none of them seemed disappointed with the LG G3’s 4K capabilities, especially when you realize that you can also play back and simultaneously zoom 4K footage as its playing back. 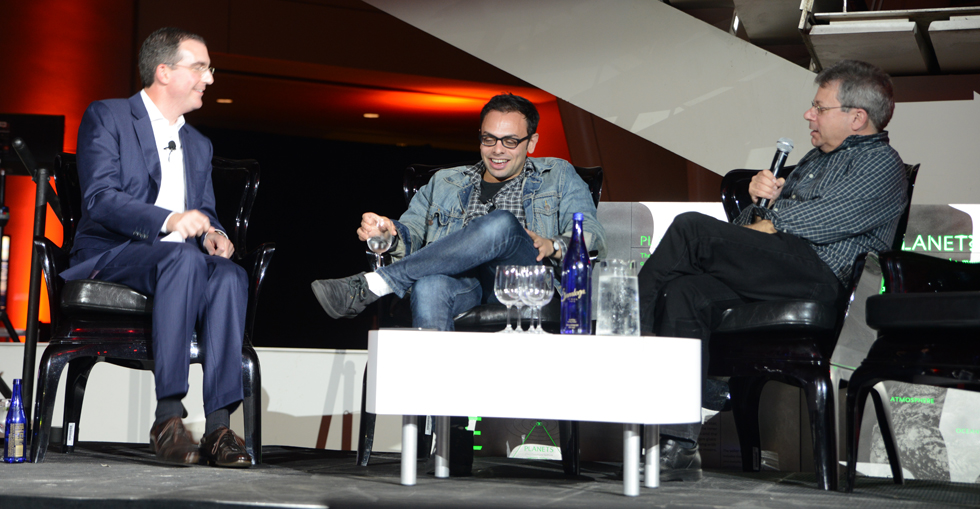 Tim McDonough with Nathan Silver and his dad. 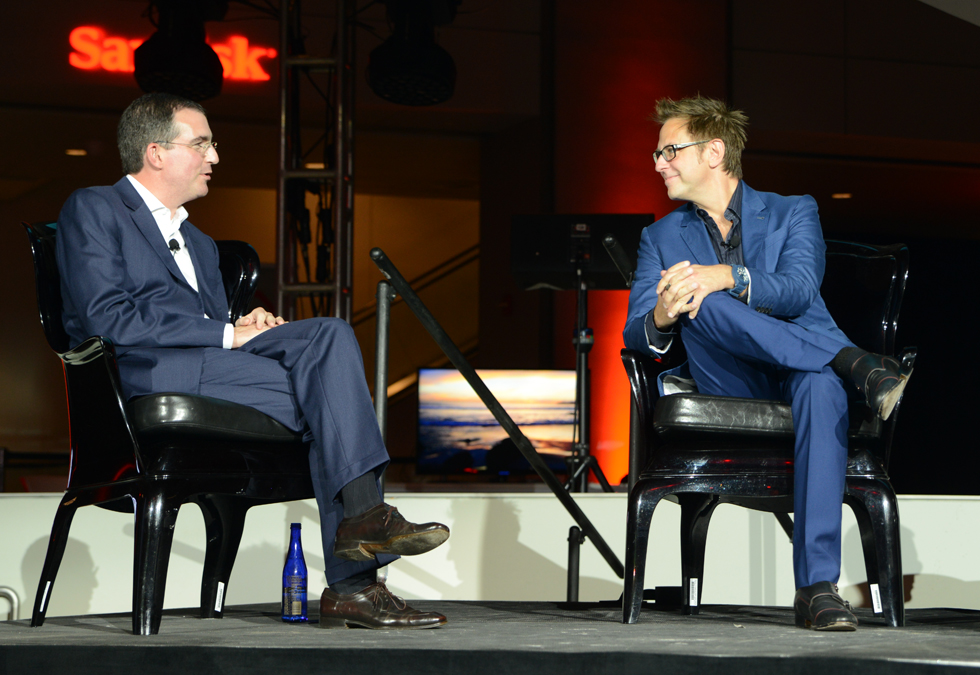 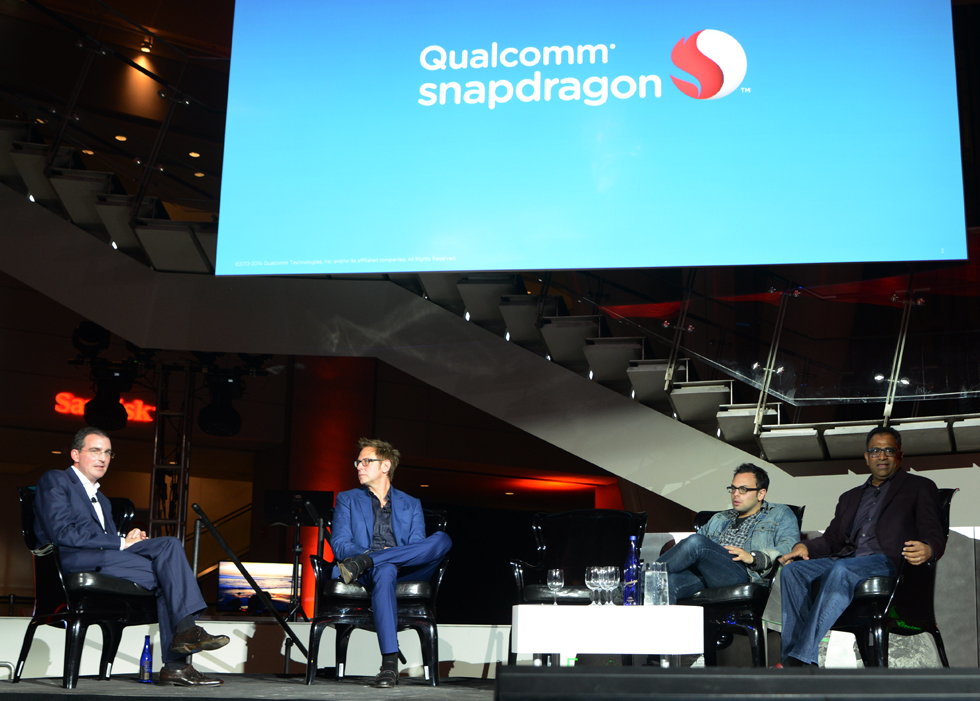 To end the event, Qualcomm announced, with all of the men on stage, a new $25,000 contest for the best 4K video. All you have to do is the following: