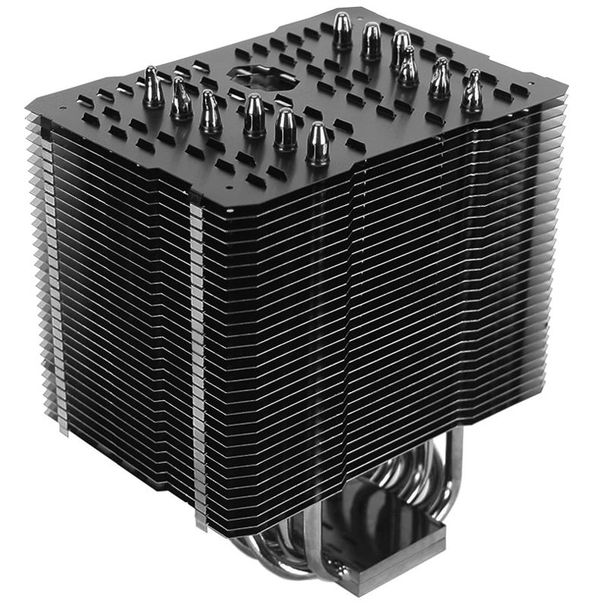 Since its launch in 2012, Thermalright’s Macho CPU cooler has been lauded as an efficient cooler that strikes a balance between performance and noise levels. Today, the vendor is launching a special edition called the HR-02, or Macho Zero, that takes things to an entirely new level as far as noise levels are concerned.

Thermalright tweaked the design of the original CPU cooler with an added focus on silent operation, which resulted in the Macho Zero becoming a fanless CPU cooler with passive cooling. The cooler features six 6mm thick copper heatpipes feeding into the black anodized aluminium fin stack, which have been optimized for lower air resistance. There’s an oval duct in the center of the fin stack that the vendor claims “provides controlled air turbulence” for enhanced cooling.

The Macho Zero has dimensions of 140mm x 102mm x 162mm, which means that users will not have any issues in fitting the cooler into most mainstream mid-tower enclosures. Thermalright claims that the fanless design is adequate for mid-tier non-overclocked CPUs. But if users are looking to push their systems to the limit, the vendor is also offering an active mode that lets users attach 120mm or 140mm fans to the sides of the cooler to maximize airflow. The fan brackets come in black to match the color of the cooler, and Thermalright is also offering 140mm PWM controlled fans designed specifically for the Macho Zero.

In total, the Macho Zero features three modes: a passive mode with a fanless design, an active mode through which air is circulated via fans attached through the fan brackets, and a semi passive mode in which the cooler uses the rear exhaust of the chassis to direct air away. While the two former configurations will be made available widely, the semi passive mode version will only be available on MindFactory in Germany. The standard Macho Zero retails for $60, and is set to launch soon.