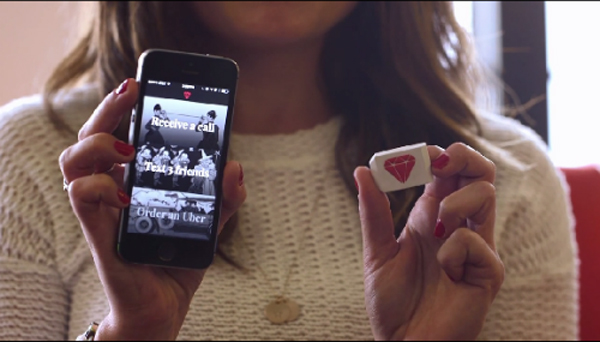 “Close your eyes and tap your heels together three times. And let all people know where you are”

Many of you might remember Dorothy’s ruby slippers from the classic Wizard of Oz.  Well, it’s coming to the real world, but instead of sending its wearer home though, this one will let everyone know you’re coming home instead.

Dorothy is the brainchild of iStrategyLabs, a Washington-based social-media marketing firm. The “ruby slippers” here is actually a small, pocket-sized wearable Bluetooth device, which is slipped inside your shoes. You use it much like how Dorothy uses the original one: you tap or lightly stomp your feet three times to initiate a command or action. By default, it sends the wearer’s smartphone a fake phone call notification, which we assume would be useful in social situations where straight withdrawal isn’t exactly the most polite option.

Alternatively, tapping your shoes with the device inside can also let you automatically create a custom message to your contacts. Along with your location data, the device can let your folks know where exactly you are at the moment using the same smartphone connection.

As interesting as its prototype may be, the Dorothy wearable protoype shown in the video is still at its earliest stages. In fact iStrategyLabs is currently looking for new ideas for added features, and are planning to further shrink down its size as it gets further developed. Also, there is also no word about its commercial release at the moment.

One additional feature the development team plans to do though is to connect the device with Uber’s ridesharing service. So, not only can you broadcast your location with it, but it might just be able to literally send you home in the future, albeit using the taxi that it called.